ACCEPT Returns To The Stage In The US; Fan-Filmed Video Of “Balls To The Wall” Streaming


On July 2nd, German metal legends Accept used a headlining gig at Penn’s Peak in Jim Thorpe, PA as a warm-up for their appearance at the annual M3 festival. Due to US Covid-19 restrictions on airline flights, they were forced to play with only two guitars, Uwe Lulis (a German citizen) being unable to enter the country. Bravewords, however, was in attendance and a full report will follow shortly, but the setlist was a mix of old and new with a couple of surprises mixed in.

Check out fan filmed video from the show below.

“Too Mean To Die”

“Princess Of The Dawn”

“Fast As A Shark”

“Balls To The Wall”

Accept have been flying the flag of classic metal for decades, and with their latest album, Too Mean To Die, they have once again proven themselves to be international chart stormers with top 10 placings worldwide. Now, after a long absence due to Corona, they are proud to announce they will finally be returning to European stages in 2022, with their usual driving energy full of irrepressible power. They will be playing the new album Too Mean To Die and the Accept classics.

For decades, Accept have stood for pure metal, great melodies and unforgettable live moments. Their three exceptional guitarists will undoubtedly transform audiences into a surging mass and blow the virus into oblivion. Because, according to Wolf Hoffmann: “We are too mean to die! Weeds do not die! Accept won’t let it get them down!”

Guitarist Philip Shouse adds: “The best thing that will happen for us is to go to the airport, get on a plane, fly to you and play a big, fantastic gig.”

Accept will be supported in Europe by none other than Phil Campbell and the Bastard Sons, who unforgettably brought venues around the world to boiling point with Motörhead and stands for pure Rock N Roll. The US speed/thrash wrecking ball veterans Flotsam And Jetsam complete the billing. 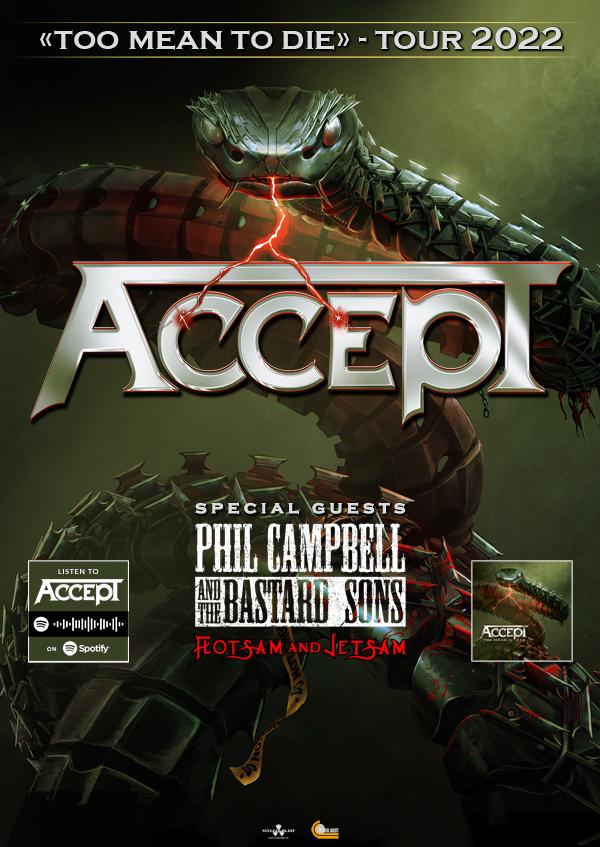 Shows marked (**) are without Phil Campbell And The Bastard Sons.

Russia Says It Fired Warning Shots at a U.K. Warship Near Crimea

How Humanity’s Obsession With Color Has Shaped Our Modern World

How vaccine mandates are being used around the world

Team USA’s Robert Finke charged to a gold medal with a stunning late burst in the...

Chinese stocks in tentative bounce, Fed in no hurry to taper