Australian rockers, Audio Reign, announce the release of their brand new single, “Relentless”, which will also be performed live during their upcoming live VR stream.

You can listen to the single here, and watch a music video below:

Don’t forget about Audio Reign’s live virtual reality, VR, live stream by Netgigs on July 18. Join the boys as they get set to unleash their explosive brand new single to the world. This very special Sunday afternoon event will be held at Crown and Anchor in Adelaide South Australia. For more information or to watch the VR live stream, head here. 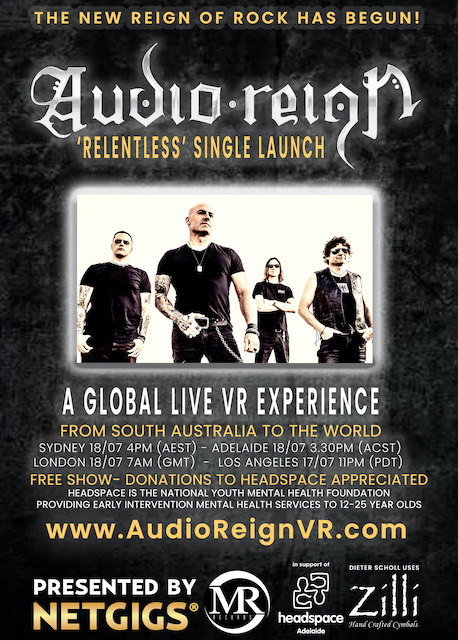 “With the release of our new single, we wanted to do something different, something special that hadn’t been done before. A live VR show was the answer and the only company that we could trust to make this happen was Netgigs.” – Jake Fleming, Audio Reign

“First there were live events. Simple. Turn up and enjoy. But if your favorite event is not in your home town, you would miss out. Then came live streaming which made it possible to see an event, live, from anywhere on the planet with the internet and that feels like being at that live event, but like looking through a window. Netgigs is now ushering in Virtual Reality (VR) with simple headsets to deliver the incredible experience of being at a live music concert as it happens, wherever it happens. Not like watching TV, but an immersive experience as close as possible to feel like you are in the action not watching it from afar. You can enjoy the show from the front row being a part of the live crowd and can even be on stage with your favorite artist!” – Philip Vafiadis, Netgigs Chairman-Elect

“Audio Reign is a powerhouse rock band from Australia. MR Records is excited to be involved with the release of their new single and EP of the same name, Relentless. The single has a strong message of the times we are all living in. Audio Reign supported Kip Winger in 2020 in an acoustic setting and blew the crowd away. We look forward to working with Audio Reign as we feel they have a great and exciting future ahead.” – Peter Naylor, A&R, MR Records

Audio Reign was formed in 2011 with the vision of creating an inimitable Australian rock sound, molding driving heavy guitars with melodic vocals and harmonies.

The band’s debut EP Find Your Way, mastered by the iconic Jens Bogren (Dragonforce, Opeth) was released to coincide with their unforgettable festival debut at the Big Day Out in Australia in 2014 with an audience of over 15,000 die-hard rock fans.

Following on from their breakthrough single “Find Your Way”, Audio Reign’s first full-length album offers a proper taste of what they are capable of: a monster storm of huge, driving guitars, soaring melodic vocals and an unstoppable rhythm section. Recorded, mixed, and mastered by Jarred Nettle, the album delivers a flurrying combination of writing, performance and production – capturing epic hooks and supercharging them with the ferocity of the band’s live sound. From their heaviest song to their most ethereal, Audio Reign wields an immense level of energy.

The album’s first single, “Betrayal”, is a hard rock tour de force. Hard-hitting and relentless, it sets a musical and lyrical tone that is abundant throughout the album: raw emotion and undiluted power. Vivisecting an act of treachery, the song casts a stark light on a shadowy deception, delivered by the unmistakable voice of frontman/guitarist Jake Fleming. Driving his vocals like a battering ram; the irreplaceable legion of Alek Dyrynda (lead guitar), Ash Lovett (bass) and Dieter Schoell (drums).

Seasoned performers since forming in 2011, this lineup is adept and versatile – able to switch from high octane tracks like Betrayal to intense slow-burners like the emotionally charged Senses. Recent performances with the hugely successful (US) rockers ‘Skillet’ & ‘Pop Evil’ have demonstrated the band’s ability to hold their own at this level and highlight the recognition this band is receiving, confirming they are ready to explode! With an incredible live show, a loyal and growing fanbase, and a repertoire of their most electrifying material to date, there is so much potential coursing through Audio Reign that their future could very well be to preside at the top echelon of Australian rock. That journey, long and arduous as it may be, starts right here with one of the best hard rock debut albums of the year.

Few Israelis wanted a leader to the right of Netanyahu. Naftali Bennett is set to oust his old boss anyway.

The Power of the Mirror Moment

The organized far-right threat on Jan. 6 comes into sharper focus

Morning Brief: Afghans given 3 days to apply for repatriation

China Cracks Down On Its Tech Giants. Sound Familiar?