Brazilian progressive death metal act Abstracted – whose sound blends the blistering technicality of acts such as Obscura and Edge Of Sanity with moments evoking the melodic side of bands such as Opeth and Fates Warning – have unveiled a visualizer for their new song, “Wither To Dust”.

The track is now available for streaming/download through all digital music outlets, and the clip can be seen below. 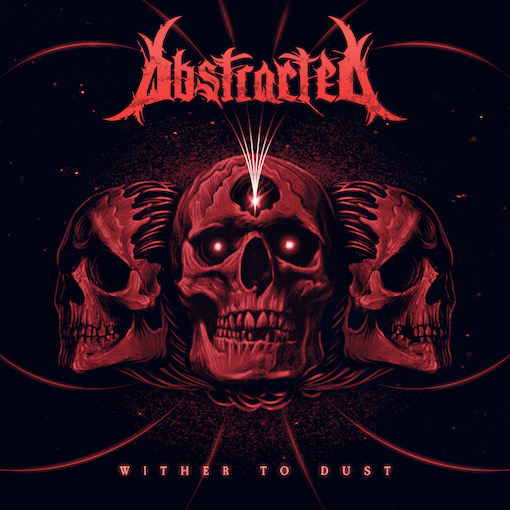 “Wither To Dust” is the second preview of the quintet’s debut full-length, Atma Conflux, which will be released worldwide later this year.

Says the band, “’Wither To Dust’ talks about the moment when you are facing the fears, agony and wounds that you carry in your life’s journey. Tibetan Buddhism and Gnosis are references that we approach in this song. The cover art for the single by the artist Fernando Kao brings the representations of this state between death and rebirth. The song is part of a concept story, narrating the path of the protagonist, showing his thoughts and experiences in this spiritual journey. Old-school thrash/death riffs, melodic guitars with a power metal feel, ’80s synth prog solos, deathcore riffs and modern breakdowns are the background for this trip inside the protagonist’s mind. We hope you all enjoy it, because we are delivering with all our hearts.”

Abstracted was formed in the band’s hometown of Sao Paolo, Brazil in 2014. The group was initially birthed from the ashes of Nyth, a previous band that Rosano Matiussi (vocals/guitars) and Guilherme Nolasco (guitars) had been involved with. After their first live performance – rounded out by drummer Alexandre Dantas and then-bassist Allen Lordaro – the new group entered the studio to record an album showcasing a sound that was birthed by a love for bands that balanced metallic intensity with a propensity to stretch the progressive boundaries of the genre.

Abstracted took their name from a song by Swedish melodic death metal greats Scar Symmetry. Influences from other European acts such as Necrophagist and Gojira, American bands such as The Faceless and Between The Buried And Me, and genre giants such as Death and Coroner all formed the basis for the sound that the band explored on their thrilling 2015 debut EP, Ophidian. The recording saw new bassist Riverton Vivela enter the picture and featured guest appearances from Allegaeon guitarists Michael Stancel and Greg Burgess. The group continued to build their name in the years that followed while balancing scholastic pursuits with live appearances on festivals throughout their native country.

Abstracted began recording their debut full-length, Atma Conflux, in 2018, and continued writing, crafting, and producing the record throughout 2019 and 2020. The new album sees the group – which recently welcomed keyboardist Carol Claro – integrating synthesizers and orchestral keyboards into their already-expansive sound. With their lineup now fully solidified, a new album ready and live performances imminent soon, Abstracted is poised to unleash their sound to the masses in 2021. The first taste of the scintillating sounds to be found on “Atma Conflux” was revealed earlier this year with the music video for “Decree of Sunlight” (featuring guest vocals by Mike Semesky (Raunchy, Interloper), which can be viewed below:

More information on Abstracted and Atma Conflux will be revealed in the weeks to come.

Nurse Practitioners: What You Should Know

As high court upholds Obamacare, both sides rush to recalibrate

25 Things You Don’t Know About Me

Fauci: ‘There’s no way’ the coronavirus was made with U.S. research funds. Here’s why

Coronavirus: What’s happening around the world on Saturday

The latest: Thousands of people took to the streets of Sydney and other Australian cities on...

25 Things You Don’t Know About Me

Fauci: ‘There’s no way’ the coronavirus was made with U.S. research funds. Here’s why