BRUCE DICKINSON Teases 2022 IRON MAIDEN Tour – “Next Year I Will Be Onstage With All My Mates, And With You As Well”; Video


Iron Maiden frontman, Bruce Dickinson, will launch his first-ever UK spoken word tour on August 1 in Brighton, England at Theatre Royal. In a new trailer, which can be found below, Dickinson lets fans know what they can expect from the shows, and slips in news that Iron Maiden will be touring in 2022.

Says Bruce: “It’s going to be wonderful to come out of eternity, and be in front of real people. And next year, I will be onstage, with all my mates, and with you as well, a few more of you.”

So there’s plenty to be entertained by, throughout the evening’s cornucopia of fascinating tales and derring-do exploits, all delivered by Bruce with characteristically infectious enthusiasm and wry wit.

Split into two parts, the first section of the show sees Bruce taking a humorous and often satirical look at the world from his own very personal perspective, as told first-hand in his inimitable anarchic style, punctuated with photographs, videos and sometimes even erupting into song a-capella, to illustrate a point.

The final section of the evening is devoted entirely to a Q&A session, with the opportunity to pose questions on any subject whatsoever – the more left-field and quirky the question, the more interesting and compelling the response is likely to be! 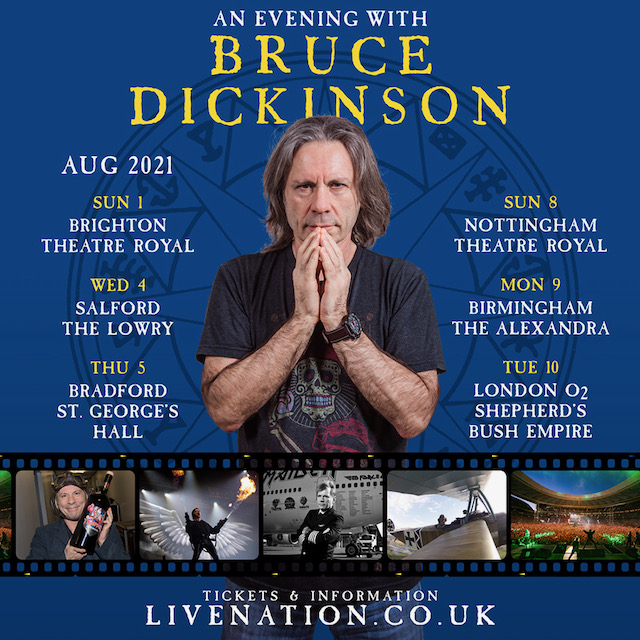 Tickets are on sale now via Ticketmaster.

Iron Maiden has uploaded a new teaser for their Belshazzar’s Feast, which can be seen below:

The band previously released a video with Bruce Dickinson inviting fans to their Belshazzar’s Feast. Dickinson says in the video, “July the 15th. Rain or shine, heaven or hell, man or beast, you’re invited to Belshazzar’s Feast…but your mum can’t come.”

The video comes after rampant speculation that the British heavy metal legends were preparing to announce new music after recent postings from the band showed the letters “W.O.T.W.”, thought to mean “Writing On The Wall”.

Did Ruby Rose Really Quit Batwoman Because She Was ALLERGIC To The Costume?!

Ethereum’s London, Berlin and Shanghai forks and their role in Serenity

All the Ways Amazon Tracks You—and How to Stop It

This Prize-Winning Photo Shows The Unfiltered Truth Of Self-Isolation

The 5 Best Versatile Basics That Are True Wardrobe Staples

Simone Biles' sponsors offered statements of support Wednesday following her decision to pull out of Thursday's...