Dominic Cummings today accused Carrie Symonds of distracting the Prime Minister and officials early in the pandemic by ‘going completely crackers’ over a story in the press about their dog Dilyn – before forcing him out of No 10 months later.

Mr Cummings, who only referred to Miss Symonds as ‘the Prime Minister’s girlfriend’ rather than by name, claimed she was ‘desperate to get rid of me and my team’, who were alleged at the time to have cruelly nicknamed her ‘Princess Nut Nut’.

He also described the toxic atmosphere in Downing Street before he left in November amid claims they had been at war for months until Mr Cummings and several of his allies were forced out.

In bombshell evidence to MPs today, the Prime Minister’s former chief aide revealed that on March 12 last year, as Downing Street wrestled with the unfolding pandemic and a US demand to join in a bombing campaign in the Iraq, Miss Symonds was furious over a Times story claiming the couple were going to get rid of the dog, calling it ‘total c**p.’

Mr Cummings said: ‘It sounds so surreal it couldn’t possibly be true’, explaining the PM’s fiancee anger came on the day he told the PM that there were ‘big problems coming’ because of Covid and SAGE experts predicted up to 500,000 people might die from Covid-19.

The row was almost a fortnight before the first lockdown was finally introduced on March 23 – he warned that people should be told that day to stay at home if they had symptoms as Trump threatened to bomb the Middle East. 24 hours later President Trump ordered airstrikes in Iraq on five weapons storage sites run by an Iranian-back militia, in retaliation for a rocket attack which killed two American and one British soldier near Baghdad. 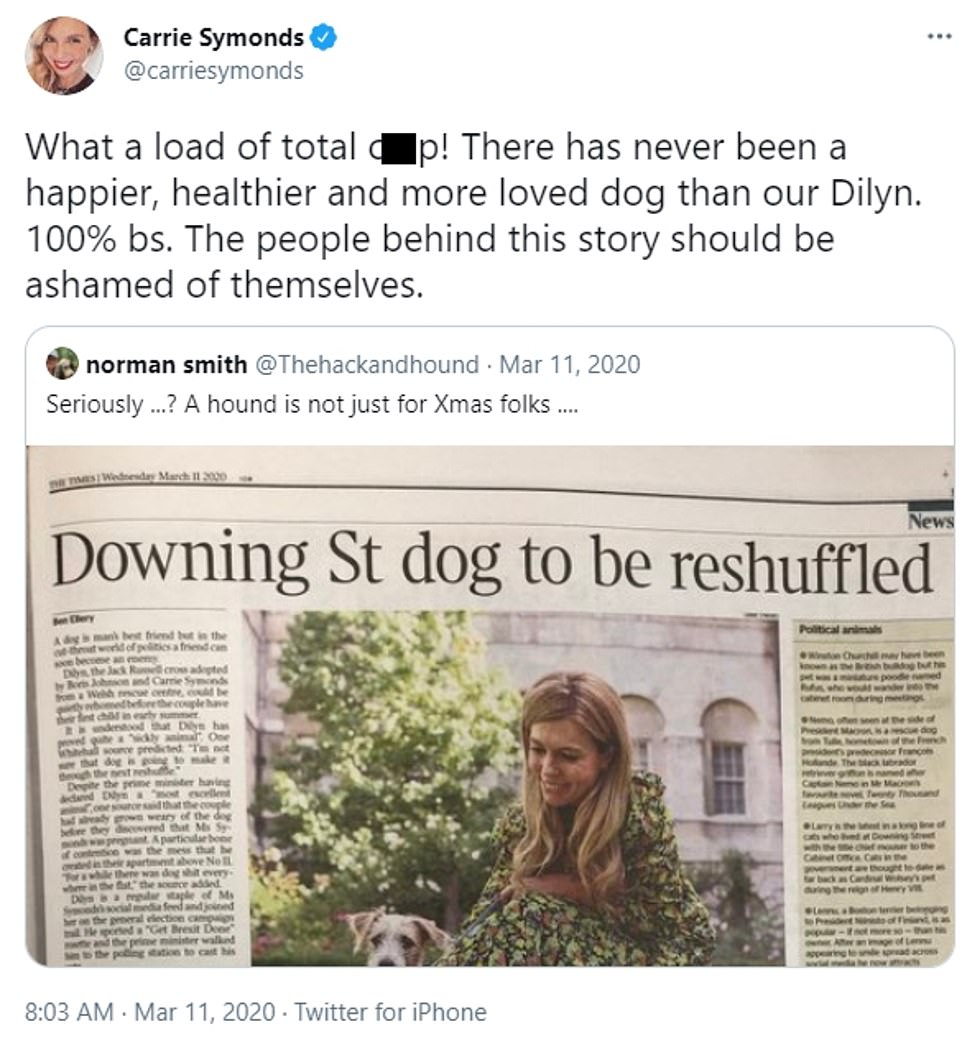 Mr Cummings – who only referred to Miss Symonds as ‘the Prime Minister’s girlfriend’ rather than by name – said he warned the PM that self-isolation measures had to be announced immediately, claiming that he told him: ‘We’ve got big problems coming. The Cabinet Office is terrifyingly s**t.  No plans, totally behind the pace, we must announce today, not next week. We must force the pace. We’re looking at 100,000 to 500,000 deaths between optimistic and pessimistic scenarios.’

There were attacks on five targets in southern Iraq by US warplanes on the night of March 12 which were supported by the British military – so Mr Cummings is thought to have been referring to this.

Miss Symonds was so incensed by the story in the Times that she took to Twitter to claim it was ‘total c**p’. The comments are the latest and most public stage of a major ongoing row between Mr Cummings and Miss Symonds, which is believed to have been the reason for his firing in late 2020.

What was the Times story about Dilyn the dog that so incensed Carrie?

The Times story about Dilyn the dog which so angered Carrie Symonds was a report in March 2020 claiming he could be quietly rehomed before the couple had their first child.

The newspaper reported that the Jack Russell cross adopted by the couple had proved quite a ‘sickly animal’, with one Whitehall source saying: ‘I’m not sure that dog is going to make it through the next reshuffle.’

The couple were said to have been angry about the mess the dog created in their apartment above 11 Downing Street, with the source claiming: ‘For a while there was dog s**t everywhere in the flat.’

Dilyn moved from Friends of Animals Wales in Rhondda into Downing Street in September 2019 aged 15 weeks after puppy farmers abandoned him.

But a Downing Street source told the newspaper at the time that Dilyn was in ‘great shape’, adding: ‘It’s completely untrue that there are plans for him to be rehomed.’

And Miss Symonds dismissed the story hours later on Twitter, writing: ‘What a load of total c**p! There has never been a happier, healthier and more loved dog than our Dilyn. 100 per cent BS. The people behind this story should be ashamed of themselves.’

The story has since been removed from the Times website.

She is believed to have been behind his defenestration last winter, which saw the former Vote Leave mastermind sensationally ditched. His allies were alleged to have referred to Miss Symonds, a former Conservative Party director of communications. as ‘Princess Nut Nuts’.

The slur went viral last November as the extraordinary power struggle between the PM’s fiancee and the Vote Leave cabal emerged in public.

But it was in fact said to have been circulating since the early days of Boris Johnson’s premiership, with tensions evident from the outset.

There had long been frustration over claims that Miss Symonds was running a shadow PR operation, while she is said to have been incensed at the aggressive behaviour of Mr Cummings and his cadre.

Miss Symonds, herself a former government special adviser and Conservative Party head of media, emerged triumphant last November in the struggle for control with Mr Cummings.

Other tags for Miss Symonds previously circulating among the Brexit clique include ‘Cersei’, a reference to the scheming Game of Thrones character.

A source told the Mail on Sunday that the nickname had been wrongly reported as ‘Princess Nut Nuts’.

‘It’s Princess Nut Nut,’ they said, before revealing that Miss Symonds’ adversaries used the phrase so often during the general election that they started using an emoji of a princess followed by two peanuts instead of words in text messages.

Miss Symonds was reportedly labelled a ‘princess’ for what her foes claimed was regal behaviour while the ‘nut’ is believed to be a poor-taste joke about her being ‘crazy’.

Mr Cummings said that in retrospect it was a ‘huge failure’ on his part not to ‘hit the emergency panic button’ earlier. He said it was’ obvious’ in retrospect that the UK should have locked down in the first week of March at the latest.

‘We certainly should have been doing all of these things weeks before we did, I think it’s unarguable that that is the case.’ 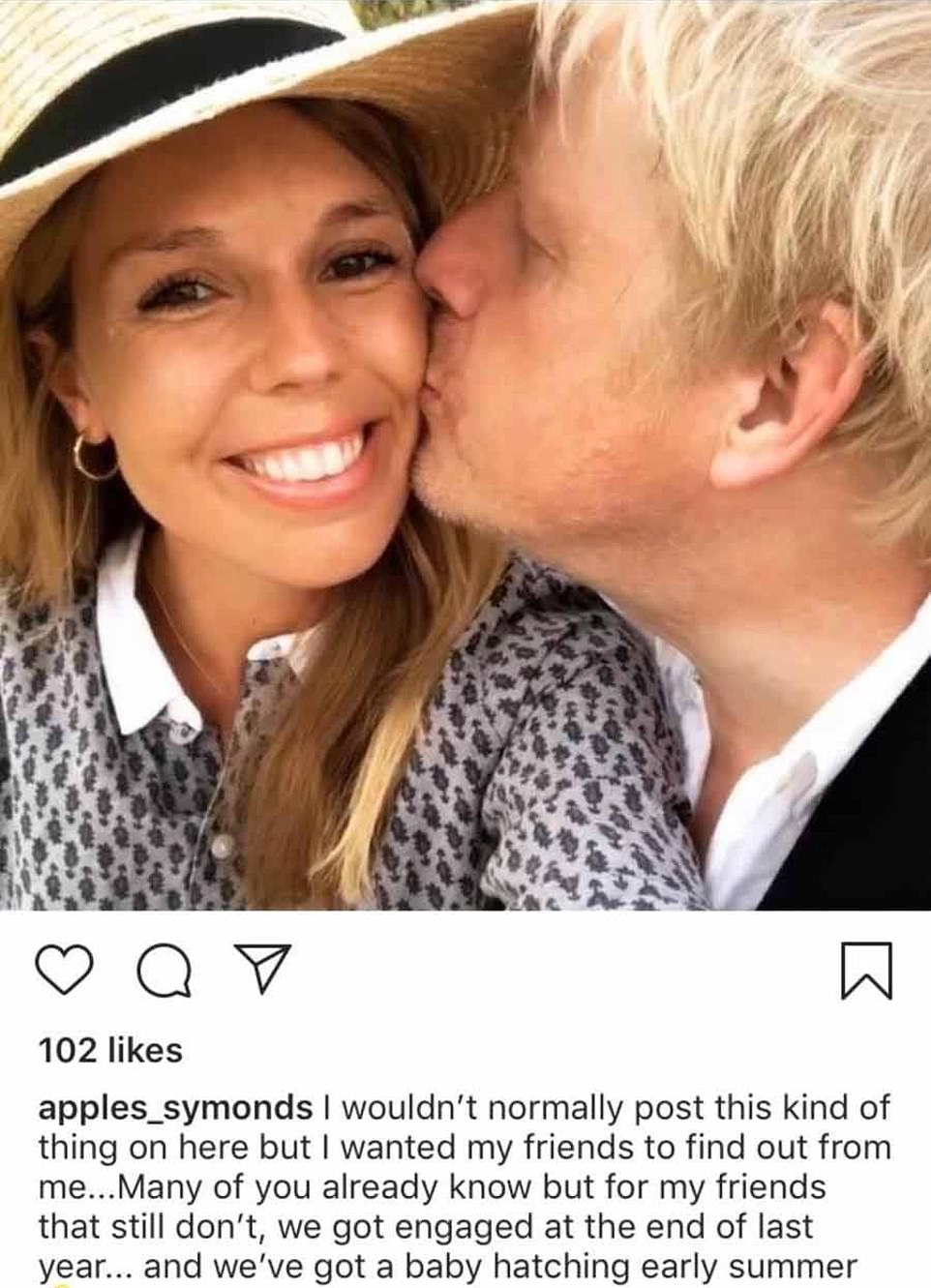 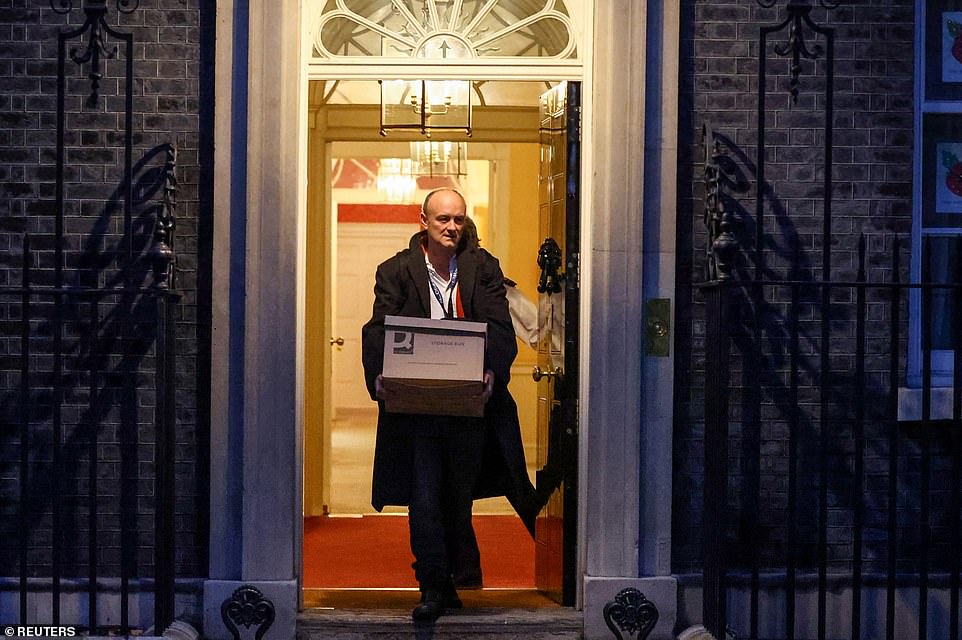 Mr Cummings carried his belongings out of No10’s famous front door in a cardboard box in November. Today he claimed Carrie was ‘desperate’ to get rid of him and his team

The US launched air strikes in Iraq on March 12 last year after a ‘hugely popular’ British army medic was killed in a missile attack on a coalition military base, along with two American servicemen.

Lance Corporal Brodie Gillon, 26, who served as a Reserve with the Scottish and North Irish Yeomanry, died after a dozen missiles were fired at Camp Taji, north of Baghdad, the day before.

The US air strikes – which were supported by the British military – targeted the Iranian-backed Shia militia members who were thought to have been behind the deadly rocket attack, according to a US official. 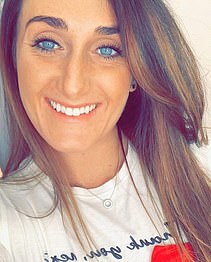 Two US servicemen were also killed in the attack, and another 14 military personnel were injured, according to the US Defence Department which described the action as defensive precision strikes on five weapon storage facilities.

Weapons facilities belonging to Kataib Hezbollah, who had been designated a ‘foreign terrorist organisation’ by the US State Department since 2009, were among the targets.

The strikes came two months after Iran carried out a massive ballistic missile attack against American troops at a base in Iraq.

L/Cpl Gillon was killed while volunteering as part of the Irish Guards Battle Group during their deployment to Iraq, the Ministry of Defence said.

Also on March 12, US Secretary of State Mike Pompeo said the attack would ‘not be tolerated’, while Foreign Secretary Dominic Raab said it was a ‘cowardly’ act.

‘All I can say is my worry was, my mental state at the time was, on the one hand you can know from the last week of February that a whole many things were wrong.

‘But I was incredibly frightened, I guess is the word, about the consequences of me kind of pulling a massive emergency string and saying the official plan is wrong and it’s going to kill everyone and you have got to change path because what if I’m wrong? What if I persuade him to change tack and that’s a disaster?’

Mr Cummings also told MPs that people died unnecessarily because of Government failings during the pandemic.

He said he was sorry that ministers, officials and advisers had fallen ‘disastrously short’ of the standards the public should expect in a crisis.

The former adviser, who left Downing Street last year after a behind-the-scenes power struggle, told the MPs: ‘The truth is that senior ministers, senior officials, senior advisers like me fell disastrously short of the standards that the public has a right to expect of its Government in a crisis like this.

‘When the public needed us most the Government failed. I would like to say to all the families of those who died unnecessarily how sorry I am for the mistakes that were made and for my own mistakes at that.’

Mr Cummings said he regrets that he ‘did not follow up’ and ‘push’ on pandemic preparations at the end of January 2020, adding that it was not until the end of February that it was realised the plans were ‘hollow’.

The Government was not operating on a ‘war footing’ in February 2020 as the global crisis mounted and ‘lots of key people were literally skiing in the middle of February’, he said.

Mr Cummings admitted not attending early Cobra meetings – claiming information leaked too frequently from them and he would rather discuss issues in conversations with chief scientific adviser Sir Patrick Vallance.

The former No 10 insider also suggested Mr Johnson did not chair early meetings of Cobra because he did not consider the virus to be serious.

He said the Prime Minister thought the issue was like ‘swine flu’ and did not need to cause concern.

And he suggested that Mr Johnson had considered being injected with coronavirus by chief medical officer Professor Chris Whitty to prove it was not that serious.

‘The view of various officials inside No 10 was – if we have the Prime Minister chairing Cobra meetings and he just tells everyone ‘it’s swine flu, don’t worry about it, I’m going to get Chris Whitty to inject me live on TV with coronavirus so everyone realises it’s nothing to be frightened of’ – that would not help actually serious planning,’ he said.

Ahead of his appearance before MPs, Mr Cummings tweeted a picture of a whiteboard on which the Government’s ‘plan B’ for the first wave of the virus was sketched out.

Mr Cummings had said the Government’s original plan was for limited intervention with the hope of achieving herd immunity but that was abandoned when it became clear the scale of the death toll that would result. 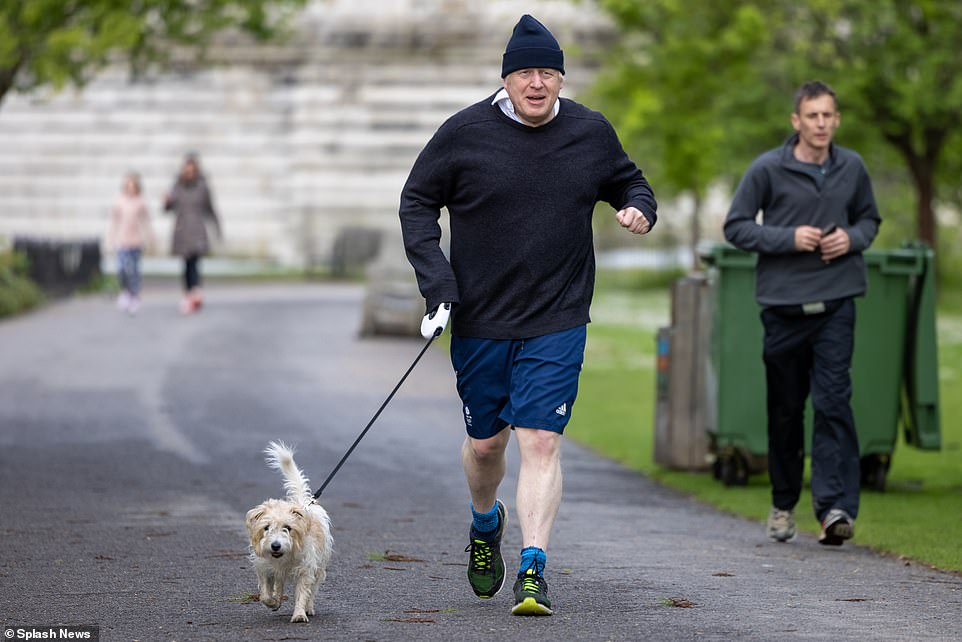 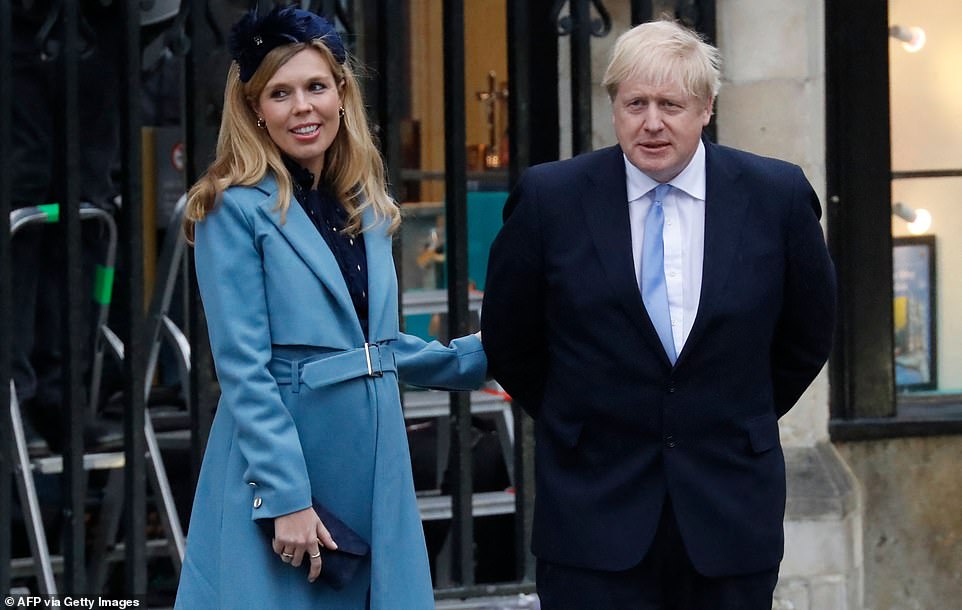 Boris Johnson and Carrie Symonds in London on March 9, 2020, three days before the day Mr Cummings was referring to

In February this year, the Daily Mail reported how Katie Lam, who worked for Mr Cummings, put down her bag and other belongings – only to see Dilyn cock his leg over them.

Miss Lam pushed away the dog to protect her possessions, sources claimed, before Miss Symonds arrived at the scene shortly afterwards. According to some sources, Miss Symonds remonstrated with Miss Lam.

However, this was disputed by others. Some friends of Miss Symonds are said to have criticised the way Miss Lam responded. Friends of Miss Lam, though, said she acted ‘perfectly reasonably’.

Miss Lam left Boris Johnson’s inner circle in February, but there was no suggestion that her departure was linked to the incident with Dilyn in the garden – or any criticism of Miss Symonds.

The Vaccine Rollout Is Changing How We Think about Prescription Meds

The 38 Best Statement Dresses for Under $200

Competing for the Russian Olympic Committee (ROC) team, world No. 2 Medvedev appeared to be struggling...