Dominic Cummings Says Matt Hancock Lied And Should Be Sacked

Health secretary Matt Hancock “lied”, lost the confidence of top civil servants and should have been sacked over his handling of Covid, Dominic Cummings has said.

Boris Johnson’s ex-senior adviser has been giving evidence to MPs on how the prime minister’s top team dealt with the pandemic in 2020.

Cummings said Hancock should have been fired for multiple offences and claimed the then cabinet secretary, Mark Sedwill, agreed with him.

Speaking to a Commons committee, Cummings said one of Hancock’s lies was that everybody got the treatment they deserved in the first peak when “many people were left to die in horrific circumstances”.

Asked to provide evidence of the Hancock’s lying, Cummings said: “There are numerous examples. I mean in the summer he said that everybody who needed treatment got the treatment that they required.

“He knew that that was a lie because he had been briefed by the chief scientific adviser [Patrick Vallance] and the chief medical officer [Chris Whitty] himself about the first peak, and we were told explicitly people did not get the treatment they deserved, many people were left to die in horrific circumstances.”

Cummings left his job in Downing Street in November and remains a controversial figure after his own trip to Durham during lockdown last year.

The PM’s former aide also took aim at leadership across government and Whitehall and repeatedly apologised for his own failings during the pandemic, telling MPs that collectively government “fell disastrously short of the standards the public has a right to expect”.

He said: “Like in much of the government system, there were many brilliant people at relatively junior and middle levels who were terribly let down by senior leadership.

“I think the secretary of state for health should’ve been fired for at least 15, 20 things, including lying to everybody on multiple occasions in meeting after meeting in the Cabinet room and publicly.

“There’s no doubt at all that many senior people performed far, far disastrously below the standards which the country has a right to expect. I think the secretary of state for health is certainly one of those people.

“I said repeatedly to the prime minister that he should be fired, so did the cabinet secretary, so did many other senior people.”

Hancock has been repeatedly criticised during the pandemic, including for PPE shortages and a failure to lockdown. 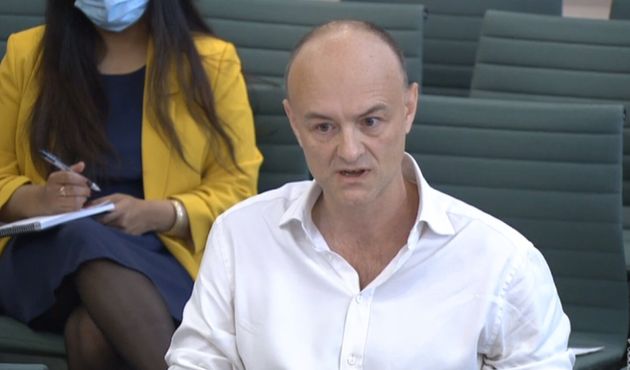 Dominic Cummings, former Chief Adviser to Prime Minister Boris Johnson, giving evidence to a joint inquiry of the Commons Health and Social Care and Science and Technology Committees on the subject of Coronavirus: lessons learnt. Picture date: Wednesday May 26, 2021. (Photo by House of Commons/PA Images via Getty Images)

Cummings also lambasted a “lack of urgency” in Whitehall early in the pandemic, saying it was fuelled by the “absolutely critical disaster” of a lack of testing data.

Discussing early March, Cummings said: “There was a fundamental misunderstanding about how far this already was in the country, how fast it was spreading in the country.

“The lack of testing data was an absolutely critical disaster because we didn’t realise early enough how far it had already spread.

“The testing data was wrong, the graphs we were shown and the models were all wrong because they were all pushed out to the right, and that massively contributed to the whole lack of urgency.”

The former chief aide to the PM described chaos in No. 10 in March 2020, saying that the second most powerful official in the country believed the UK would be “absolutely fucked” by Covid.

Helen MacNamara, the deputy cabinet secretary, had told him there was “no plan”.

“I think we are absolutely fucked,” Cummings said MacNamara told him on March 13. “I think this country is heading for a disaster. I think we are going to kill thousands of people.”

Cummings also alleged Johnson was more worried about the economy at the beginning of the pandemic than coronavirus itself.

“He had that view all the way through.

“In fact, one of the reasons why it was so rocky getting from the 14th, when we suggested plan B to him, to actual lockdown was because he kept basically bouncing back to ‘we don’t really know how dangerous it is, we’re going to completely destroy the economy by having lockdown, maybe we shouldn’t do it’.”

He added that it was wrong to suggest that chancellor Rishi Sunak had been against locking down – something which was reported at the time.

Here’s What The Coronavirus R Rate Is Near You

Vaccinated People May Spread the Virus, Though Rarely, C.D.C. Reports