Drummer Roy Mayorga (Stone Sour, Hellyeah), who previously played with Ministry from 2016 to 2017 and appeared on the album AmericaKKKant, has revealed that he will once again be joining forces with Al Jourgensen and co. He issued the following brief statement:

“Super excited to announce that I am officially back with my friends in Ministry. And can’t wait to hit the road with them coming up this October! See you all soon!”

Ministry will be moving forward with the much anticipated Industrial Strength Tour, today announcing that the previously announced spring dates have now been moved to October and November 2021 to allow additional time for COVID-19 restrictions to be lifted as The United States nears towards more normalcy this fall.

The new dates will kick off October 3 in Albuquerque and run through November 3 in Seattle, hitting all the previously announced markets except Pittsburgh, PA and Missoula, MT which unfortunately have been canceled and Baltimore, MD which will be postponed for a later date. The Buffalo, NY show has moved to a new venue and previous ticket purchases will be honored. And an additional show date has been added for Charlotte, NC that will go on sale Monday, March 22 at 10 AM, ET.

The tour’s special guests Front Line Assembly remain on the lineup for this one-of-a-kind celebration alongside newly announced support act Helmet. This special tour honors not only the 40th anniversary of Ministry in 2021 but also the 30th anniversary of revolutionary album The Mind Is A Terrible Thing To Taste and will also include brand-new material from Ministry’s upcoming 15th studio album. Due to the uncertainty of COVID-19 protocols for visas, travel and vaccine distribution in Germany as well as immigration uncertainty, KMFDM will regrettably not be taking part in this tour.

Says Ministry founder Al Jourgensen, “With current COVID-19 restrictions, we are forced to again move our scheduled March/April 2021 U.S. tour to October/November 2021 and hoping normalcy returns by then. With vaccinations and better care happening, we all feel the fall is realistic. We can’t wait to get out there and play not only The Mind Is A Terrible Thing To Taste material for you all but some stuff off our new album as well. Stay safe and see you in the fall!”

The full list of new, confirmed tour dates are below. All original tickets will be honored for the rescheduled dates in October and November; or, ticket holders can receive refunds at the point of purchase. Fans are being asked to check with their local markets and venues for new ticket purchases. 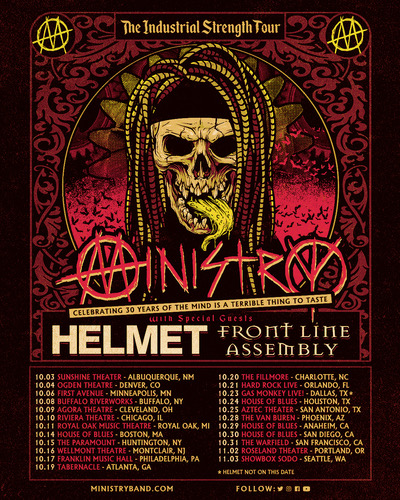 * indicates a new date not included on the original run

** indicates a venue change from the original run

*** indicates a date where Helmet will not be appearing

The Bizarro Streaming Site That Hackers Built From Scratch

We Have The First-Ever 3D Map of Our Solar System’s Heliosphere, And It’s Amazing

More than 1,800 drones came together to form an illuminated model of the world above Japan...