According to Guitar World, a recent online auction held by Julien’s Auctions brought in nearly $5 million US in three days after it sold a series of signed six-strings, artist-played electric guitars, unique items of music memorabilia and some rare pieces of artwork.

Chief among the artifacts sold as part of the company’s Music Icons lot was a collection of five Charvel Art Series guitars that had been stage-played and signed by the late guitar god Eddie Van Halen, which sold for a total of $210,225.

Two black-and-yellow Bumblebee-inspired models, sold for $38,400 and $41,600, were up for grabs alongside a red-and white-Frankenstein Mark II-styled six-string, which ultimately sold for $40,625. A reverse-colorway Charvel sold for $38,400, with the final black-and-silver striped EVH-signed Art Series guitar fetching $51,200.

As per the original line’s spec sheet, each axe was hand-striped by Van Halen himself during production, and sought to reproduce the feel and tones of his most iconic guitars. The models in question were wielded at a series of shows between 2004 and 2012, and came with extensive photographic evidence, video footage corroboration and letters of authenticity.

Read more about the auction via Guitar World here.

Losing Eddie Van Halen last year was a tremendous loss for many, including singer-songwriter-guitarist David Haerle. “Eddie”, his latest single out today, is a tribute to the man who, as David puts it, “performed miracles on six strings.” 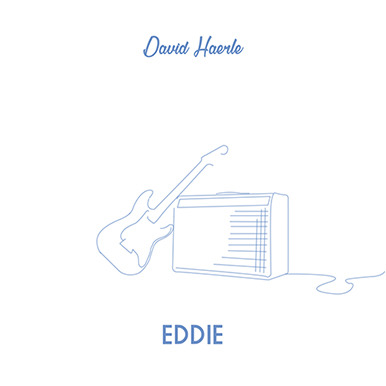 “Eddie” is now available to stream/buy on all digital platforms and the music video can be viewed below.

“I love Van Halen,” David shares. “I was 11 years old riding in the car with my dad near our home in Los Angeles and ‘Runnin’ With The Devil’ came thundering across the airwaves. That sound spoke to me. The song starts off with the backwards blare of car horns and a thumping bass line. Followed by the sound of Eddie Van Halen’s guitar and the drums kicking in. Then comes that distinctive lead vocal and their trademark harmony singing. It was like a bomb went off in the rock world that February 1978. Especially for guitar players. I started playing myself not long after that on a Fender Stratocaster and amplifier gifted to me by my parents.

“I saw Van Halen perform live early on at what was then the LA Sports Arena. Fantastic show. Eddie with that grin! The only problem with seeing guitar playing that good is it leaves you thinking, ‘where can anyone go from here?’ Once I made peace with the fact there’s only one Eddie Van Halen, I could use his greatness as inspiration to explore my own style of creativity.

“When he died in the fall of 2020, it hit me hard. His and the band’s music had been such a big part of my life, the soundtrack to my formative years. The LA Times ran Eddie’s obituary on the front page of the print edition. Eddie deserved that. I cried like a baby reading it. My song ‘Eddie’ is a thank you to the man who performed miracles on six strings. And always with a smile.”

“Eddie” is the latest release in a series of other heartfelt and personal tracks from David, including “Train Down Memory Lane,” “No More We” and “True Liberty.” His sophomore album Death Valley (May 2020) garnered praise from many music publications.

Ex-Bush Speechwriter Dismantles 'The Dreams Of Conservatives' In Scathing Essay

Portis, Tamarick Vanover and Robert McCune admitted to participating in a scheme to scam the league's...