Extreme guitarist Nuno Bettencourt has checked in with the following update:

“Hey y’all … our music community lost a dear friend a while back: David Zablidowsky, who, as David Z, was the bassist for both the Trans-Siberian Orchestra and Adrenaline Mob. He was killed when a tractor-trailor struck Adrenaline Mob’s RV. The band was en route to a gig at the State Theater in St. Petersburg at the time of the accident.

His brother is doing an amazing keeping David’s memory with us by creating the DavidZFoundadtion.org. And to raise funds for kids in music ftom mentor programs, scholarships, instruments etc. musicians like myself pull together to do performances for the fundraiser. For all of you who contributed, thank you!

I’m bummed me and the band still couldn’t be in the same room, but thanks @7venmartin @derekfrankbass and @colemartins.chopz for jumping in with and supporting a great foundation.

David Zablidowsky, better known as “David Z.” tragically died in a roadside accident in 2017 while on tour with Adrenaline Mob.

Before joining Adrenaline Mob, David had been the bass player of Trans-Siberian Orchestra. Along with his brother Paulie Z, the two had been a part of the band ZO2 and starred in their own TV series “Z Rock” on the IFC network.

ZO2 plans to debut a never-before-heard song called “Complicated” which was written and sung by David Z. It was one of the newer batch of ZO2 songs that the band were planning on releasing before the band took a break in 2012. ZO2 had a secret reunion show planned for March 2018 in NYC where some of these songs were going to be played, but sadly that never happened as David was killed in the summer 2017. This song was one David was very proud of as it was centered around a very personal experience and showcased his radio friendly writing style.

David Zablidowsky was active in developing young people through music. To continue his legacy, the David Z Foundation was founded to offer education and financial need to young aspiring musicians.

Donations to the fundraiser can be made here.

The David Z Foundation is a non-profit organization created in memory of David Zablidowsky and dedicated to transforming lives through the magic of music. Our goal is to nurture that creative musical spark that a child has and help turn it into a sustainable reality. We are currently running our original music programming nationwide, including private instruction, rock band, songwriting, production, and music business. In addition, we prepare kids for the music world by pairing them up with professionals in the field and showcasing their creativity through the various events we produce. Our focus is on providing these services to low-income families and high-risk children while subsidizing the financial costs that come with it. We also offer scholarships through partnerships with music schools such as School Of Rock, Brooklyn College, and various other local organizations around the country. 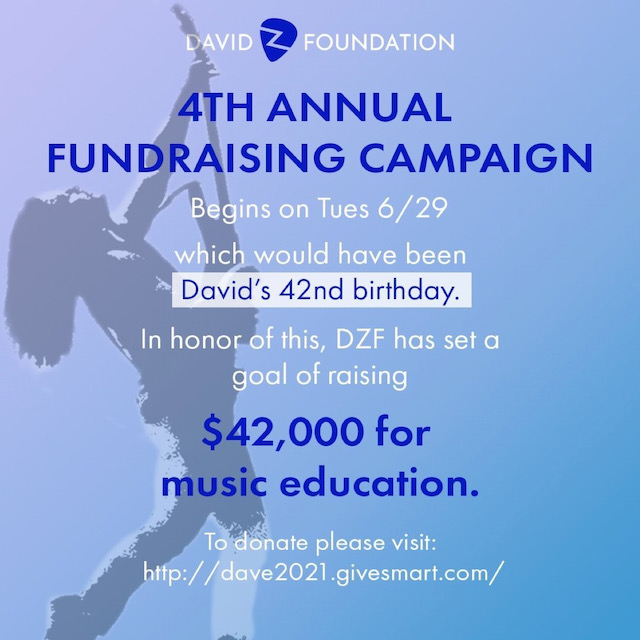 Morning Brief: 'An institution that did everything they could to take away absolutely everything we had'

Brazil’s Bolsonaro takes aim at election in echo of Trump

The Best New Size-Inclusive Arrivals to Hit the Internet

After Hundreds Of Arrests In Sprawling Capitol Hunt, The FBI Just Made A Pretty Big Mistake

Litman: Rudy Giuliani’s outrage is the refuge of a scoundrel