DL only – from Spotify or Apple or here (Netherlands)

As I said before: ‘Fluvster is a one-off, an artistic nomad, a space-cadet politico, a hippy-punk jester’. On this, his latest and possibly his best work, he seems to be getting a bit more downbeat and serious. Sitting Duck still rhymes with give-a-fuck though.

There’s no big budget, no fine-tuning – this is plug-in, play, record, release kinda stuff. Only it can’t be, because Fluvster plays all the instruments!  It still has that loose feel of a one-take jam – but one that works and the result is that-sounds-great.

There is a childlike naivety about some of the song-lyrics: repeated phrases and obvious rhymes, punctuated with profanity. But it’s instantly likeable.  Take opener ‘Brazen’ (the video for which is a year old and features footage of a now-fallen, man-baby, hippo-POTUS whose fuckface I don’t ever want to see again to be honest)

Nice Crass-like drumming, a Patrik FitzGerald type vocal – and some great wicky-wicky-wack scratching giving it another level of syncopation.

High Orifices has an almost plaintive hook adapted from a Stooges number and has a kind of slacker krautrock vibe.  It’s as if the song has a subconscious lethargy -from all the energy expended raging against everything for years…

Alaskan Thunderfuck is a Fluvster monsterpiece.  Doomy keyboard rumbles from the bowels of the earth and a sluggish, sludge-metal riff.  John Carpenter movie music and a song about a new herbal remedy or cocktail.

High Flyer is treacly funk with phlanger and a glam-rock chorus. An attack on ambition and greed personified.

Tuck Shop kinda reminds me of Sleaford Mods Mork and Mindy track, in that its a journey back to childhood but pointing to that initial experience being an introduction to the seduction of consumerism: addiction to sugar and shopping.

Dress It Up.  A mix of electronics, dub and guitar – which lyrically covers hedonistic highs but hints at morning after regret and emptiness. A few echoes of Carter USM on this one!

Another Day (Blown Away) –  Continues on the same theme. Sounds weirdly like a Sonic Youth / Krautrock/ New Order amalgam – fades itself out at 4 minutes 14, but possibly went on for an hour!

Sitting Duck  – a more jaunty pissed-off post-punk knockabout number with guitar and keyboard competing for attention – the stationary waterfowl in question of course  ‘don’t give a fuck’ and ‘lies face down in the muck’.

Sand Walker – this is the track which is a revelation.  A gentle, sad, slow and serious vibe to this lament.  Gentle picking and smooth synth.  Seems to be about loneliness and ageing. ‘Standing by an ocean of emptiness, dreaming of a sea of love…’.  It’s surprisingly moving and makes you wanna give Fluv a hug.

Everyone, I imagine, knows someone a bit like the Fluvster: a dude who is funny and full of manic energy until he has his daily intake of weed. 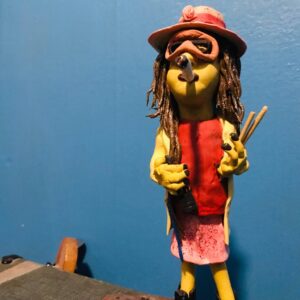 He lives in Amsterdam and looks more like his plasticine caricature every day. This album gives you a more rounded idea of the man behind the music.  He is talented and inspirational – yet has his moments of doubt & pain, anger & frustration as well as the all-important wild times of making-merry and uninhibited ‘spliffing’ abandon.

A Mighty album from a unique talent.  James from EMF once said of the Fluvsters music that it ‘makes me wanna take drugs’.  I think it’s the opposite – it replaces the need for them – Fluv is the Drug. The music is the trip… Just Say Yes!  Choose Life. Choose Fluvster!

Buy from DL Spotify or Apple or here (Netherlands)

With no vaccines, Haiti is struggling to contain covid. Jovenel Moïse’s assassination could make it worse

Sauce Recipes That Will Transform Any Meal

The NRL has announced that all 16 clubs have been placed on Level 4 Biosecurity Protocols...