A mum has spent more than $110K on tattoos and has lost count of how many she has.

Ever since Lisa-Marie was a little girl she always longed to be different and stand out above the crowd.

And the 37-year-old mum has most certainly achieved that over the past two decades.

After years of admiring tattoos from afar, she bit the bullet and got her first piece of body art when she was just 14 years old.

A mum has spent more than $110K on tattoos and has lost count of how many she has. Source: MediaDrumWorld/Australscope

Mum spends $110K on tattoos and has no regrets

“I was always different to everybody else. I guess my inspiration was me. I wanted permanent memories on my body. I wanted to see them every day,” Lisa-Marie explained.

“My first tattoo was from a Dru Hill album cover. It was a dragon on my right butt cheek so my dad wouldn’t ever see it.”

After splashing out the equivalent of more than $AUD 110,000 over the years – the Canadian has no idea how many tattoos she is sporting all over the body.

“I lost count of my tattoos after the first three – the panels all blend into each other now,” she admitted.

“The longest tattoo was absolutely my back piece – I think we ran about 30 hours across seven sessions on that. The most painful was my leg – the hamstring specifically.”

Lisa-Marie next hopes to add to her collection with a moose tattoo on her stomach. Lisa-Marie next hopes to add to her collection with a moose tattoo on her stomach. Source: MediaDrumWorld/Australscope

“I was shamed for my tattooed body when I was pregnant”

Of course, daring to be different always comes at a cost with even some of her family and friends expressing their displeasure of her inked body.

“My friends and family think I’m a little wild – I’m kind of on the outside with all of them,” she explained.

“I remember very well that once, a woman of about 50 or so wouldn’t let me serve her table because of how I looked.”

And she didn’t escape being shamed by strangers in public when she was pregnant either.

“I’ve had a lady walk up to me in the mall while I was pregnant too saying, ‘Do you think what you’ve done to your body looks good?’”

“I find a lot of men aren’t very attracted to face and neck tattoos and sometimes, my chest piece is a huge turn off for them as well,” she explained.

“I found I’ve had to stick to men with the same or a comparable number of tattoos. Most men with no or minimal tattoos have a harder time accepting it I guess you could say.”

RELATED: The story behind this tattoo is absolutely heartbreaking 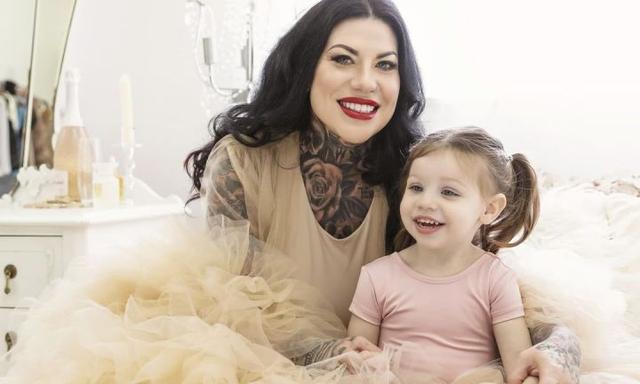 “Lots of people really admire all the artwork and the time and dedication it takes to be heavily-tattooed.” Source: MediaDrumWorld/Australscope

However, it hasn’t all been an uphill battle. In 2005, Lisa-Marie was scouted as a model thanks to her inked look.

Most importantly, her number one fan is her two-year-old daughter Royal-Marie.

“My daughter doesn’t really know much as she’s only two but she colours my tattoos in and likes to wear stick-on versions so that’s super cool,” Lisa-Marie added.

“I’ll encourage her to be herself and make her own decisions in whatever direction she wishes to travel and hopefully, I’ve guided her into a beautiful path of her own.”

But her toddler isn’t her only supporter.

“Lots of people really admire all the artwork and the time and dedication it takes to be heavily-tattooed,” she said.

“Advice I would give to anyone planning on getting a first tattoo is to make sure you love and trust your artist.”

Packers to insist on QB as part of any Aaron Rodgers trade?

12 Rules to Optimize Your Health for a 21st Century Mindset