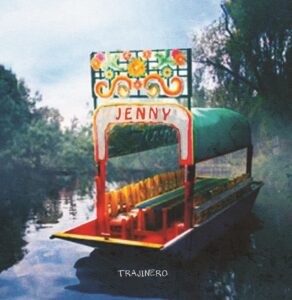 California based JENNY deliver another slice of classic West Coast power pop through their second single, Trajinero, and Louder Than War bring you the video premiere for the song.

JENNY are the brainchild of North American rock’n’roll minstrel Justin Maurer. Taking a sidestep from Justin’s other more garage punk infused bands such as Clorox Girls and L.A. Drugz, JENNY’s second single release, Trajinero, takes us back to the late 70’s power pop vibes of the West Coast, this time with a Spanish language twist.

The song was inspired by a trip on a boat ride through the swamps of Mexico City one sunny Sunday afternoon. The hand-painted gondolas are expertly guided through the winding canals by the local trajineros. With Justin’s penchant for rich characters, he obviously got lost in the moment as he imagined a lovelorn trajinero committing a crime of passion in a desperate bid to impress a local girl who he obviously felt was out of his reach. With such an idyllic setting, I have no doubt that scene has been played out many times.

Justin was ably assisted by Jacobo Fernandez and Gabreil Lopez, the latter also both engineering and mixing the recording. It’s a song that will definitely have you dancing around the living room in a manic fashion, with the Vox organ leading the infectious power pop vibe throughout, Justin’s catchy lead vocals, and great 60’s style vocal harmonies. The Spanish language was inspired by Justin’s long-standing love of the lingo having both lived and worked in Spain and Mexico over the years, so it’s a great time to practice some new words before heading off on that long-awaited holiday.

The B-side, Kids Of Today, has a far more rock’n’roll feel with Justin backed up by his former L.A. Drugz bandmates and is a tongue in cheek dig at the youth of today – yes you know who you are!

You can buy the single here.

All words by Ian Corbridge. You can find more of his writing at his author profile.

Americans are Flocking to Mexico. Should They Be?

What Ever Happened to IBM’s Watson?

Amazon dropshipping is a side hustle that can make you millions

What We Learned From the 2021 Eurovision Grand Final

Bitter anger over Jan. 6 riots lingers in the House, prompting a week of tense standoff and legislative stalemate

Canada vs Great Britain live stream: How to watch Tokyo 2020 fixture online and on TV

Shares at 7-month lows as China rout spills over

Chinese equities updatesSign up to myFT Daily Digest to be the first to know about Chinese...

The legal high that happy people get addicted to

Canada vs Great Britain live stream: How to watch Tokyo 2020 fixture online and on TV