Jeremy Corbyn should be “honest” about whether he has had his coronavirus vaccination or not, an aide to Keir Starmer has said.

Sharon Hodgson told HuffPost UK’s Commons People podcast the ex-Labour leader should not have any privacy concerns around telling people he has had the jab.

Corbyn is 71 years old, so has been eligible for a vaccine since January.

But his office has failed to respond to requests from HuffPost UK asking if he had had the vaccine, although his parliamentary office told the Guido Fawkes website this week that Corbyn “doesn’t normally comment on personal health matters”.

Boris Johnson in March invited photographers to London’s St Thomas’ hospital when he received his first dose of the Oxford/AstraZeneca vaccine.

Starmer was also photographed getting the jab at the Francis Crick Institute in his Holborn and St Pancras constituency in March.

Both used the opportunities to encourage others to get vaccinated. 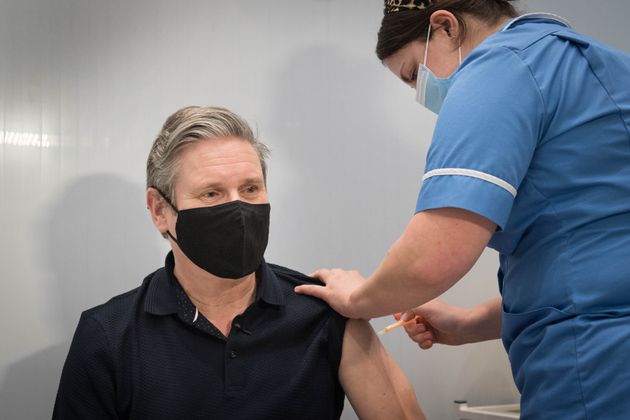 Keir Starmer receives his first dose of the AstraZeneca coronavirus vaccine from midwife, Emily Malden at the Francis Crick Institute in his Holborn and St Pancras seat, in March

Hodgson, a Labour MP who is Starmer’s new parliamentary private secretary, said Corbyn should follow other MPs in being open about whether he has had the jab as she was asked whether it could help boost take-up.

She told Commons People: “It’s not a privacy thing.

“I can’t imagine why anybody would want to say that’s a private matter between me and my jab.

“It’s not, it’s either you’ve had the jab or you haven’t.

“So yeah, if you’ve had the jab you should say and if he hasn’t then he needs to sort of be honest I suppose about that.”

It comes after Downing Street urged people who are refusing to get vaccinated to “think of others” and get the jab to help protect over-50s and vulnerable patients with immunity problems, amid localised spikes in the India Covid variant.

The prime minister has warned that the variant could delay England’s final exit from lockdown restrictions on June 21, prompting criticism from Tory MPs like Conor Burns, who said that it would not be right to keep the country in partial lockdown simply because vaccine hesitant people were refusing the jab.