Z2 Comics has teamed up with rock legend Joan Jett for a new graphic novel to celebrate the 40th Anniversary of her Bad Reuptation and I Love Rock ‘N Roll albums. Carianne Brinkman, president of Blackheart, issued following statement regarding the collaboration:

“When we began working with Z2 Comics on Joan Jett And The Blackhearts 40 x 40 for the 40th Anniversary of I Love Rock ‘N’ Roll and Bad Reputation, we reflected on all the rejection and opposition Joan faced from the industry as a woman with a guitar, especially at the beginning of her career. Luckily, she blocked out the noise and showed the doubters she could do it herself. The comic world, much like the rock ‘n’ roll world, is fairly underrepresented in terms of women, particularly in the mainstream. We thought this was a great opportunity to celebrate comic writers and illustrators who happen to be women, and who, like Joan, are constantly being asked what it’s like to be ‘a woman…’ in their respective industries. We are so excited to bring these amazing artists and writers together to celebrate this milestone anniversary.”

Joan Jett And The Blackhearts – 40×40: Bad Reputation / I Love Rock ‘N’ Roll is written and drawn by some of the most renowned female creators from around the world, and is available for pre-order now for a fall release in softcover and hardcover editions at finer comic shops, book and record stores worldwide. Exclusively available through Z2’s web site in limited quantities are the deluxe and super deluxe versions, packaged with exclusive vinyl, art prints and much more.

Z2 Comics: “Experience the graphic novel and exclusive bundles that celebrate the 40th anniversary of Bad Reputation and I Love Rock ’n’ Roll — two timeless, anthemic albums that have been the soundtrack to generations. An unparalleled team of creators brings these songs to life as 20 vivid stories in this singular graphic novel. Pre-order here.” 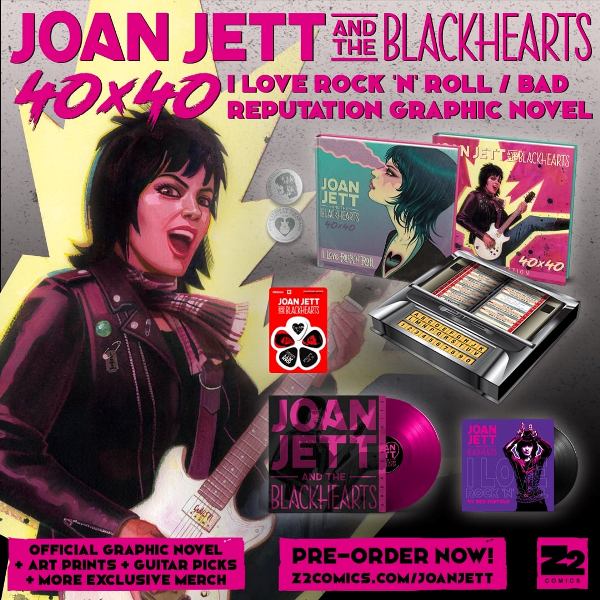 Bad Reputation is Joan Jett’s debut solo album, originally released independently in 1980 as a self-titled album following The Runaways split. It was re-issued on Boardwalk Records in 1981 as Bad Reputation. I Love Rock N’ Roll is Jett’s second album, and the first with her backing band The Blackhearts. It is Jett’s most commercially successful album to date with over 10 million copies sold, largely due to the success of the title track.

Defending The Clash: Welcome to the Resistance: CATR Radio & Live

The Nets have solved basketball, for now