Joe Bonamassa and Fender Musical Instruments Corporation (FMIC) today announced the release of The Bludgeon ’51 Nocaster, Master Built by Greg Fessler. The Bludgeon is a loving recreation of one of Joe’s most favorite guitars in his collection which makes this release a very special event. These limited-edition guitars are custom built by one of the finest crafters in the world and will come in a very limited run of only 100 made. Due to the time it takes to perfect each build, only 1-2 guitars are built per month, making this a very rare instrument to own.

In early May, the guitar made headlines ahead of its official announcement when Bonamassa shipped one to Guitar World for review. Model #JB006 was misplaced while in transit which led to Joe reaching out on social media for assistance in locating this one-of-a-kind instrument.  After a week of searching and exhausting all possibilities, the guitar final made its way back home. When Guitar World finally received the guitar, Joe stopped by their studio to talk about what makes this piece so special. Watch the whole enlightening conversation below:

The Bludgeon comes equipped with a beautiful heavy relic lacquer finish along with a one-of-a-kind 2-piece select ash body, finished with a 1-piece flat-sawn maple neck with Bludgeon Nocaster “U” back shape. The guitar also sports a 3-saddle vintage-style JB Tele bridge with brass barrel saddles, vintage-style tuning machines, and of course, a certificate of authenticity. Fans can reserve one of these beautiful and limited custom guitars now only at Joe’s website, here.

“It seems exaggerated, but that’s the sound of a Telecaster I prize or value the most.” – Damian Fanelli,  Guitar World 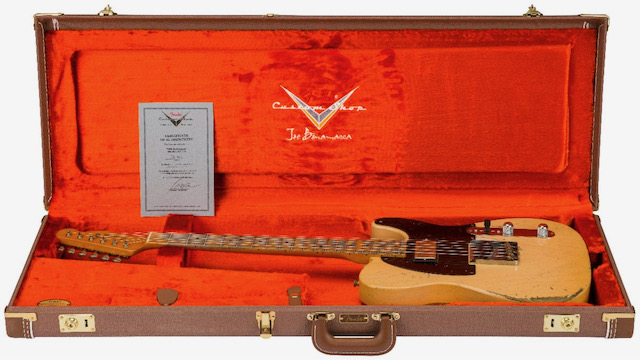 Bonamassa is undoubtedly one of today’s top live performers and his enthusiastic shows are a favorite for music lovers worldwide. With such attention to detail in his musical craft, Joe has become a huge guitar collector and The Bludgeon comes close to perfect as the latest addition to a wide variety of brands, instruments, and audio equipment that he’s given his stamp of approval. Hailed internationally as one of the greatest guitar players of his generation and cited by Guitar World Magazine as “the world’s biggest blues guitarist,” Bonamassa has almost single-handedly redefined the blues-rock genre and brought it into the mainstream. A self-made businessman, Joe has been able to make connections with a wide ranging array of brands across the globe, all who enlist his expertise for their custom designs. He’s a credited musician who knows his own needs as an artist, and a public figure that other musicians trust as a go-to source defining what brands and models to use. No doubt that Blues-Rock lovers from his undeniably massive international fan base will hear an unparalleled fresh new sound with The Bludgeon.

STRYPER Frontman MICHAEL SWEET – “I’ve Made A Worship Album That Breaks All The Molds, All The Stereotypes”

As the Virus Ravages Poorer Countries, Rich Nations Are Springing Back to Life