John Bramwell bounded into Altrincham with his ‘Full’ Harmonic Convergence. Nigel reports for Louder Than War with photos by the talented photographer Nick Provan!

Well it’s been a long time coming! More than a year of being starved of gigs and two come along at once! (Ist Ist played The Academy the following night!). What better way to rebound than with John Bramwell, live at The Bowdon Rooms in Altrincham!

Altrincham has something of a musical history, with the now demolished Stamford Hall playing host to all the big stars of the sixties, including The Hollies and The Stones. Later in the ‘70’s Check Inn hosted Joy Division, and Bowdon Social Club became the stuff of legend, when it hosted a series of gigs in ’79 featuring the The Fall, Joy division, The Freshies and V2.

It’s a slightly different experience of course these days; all these social distancing rules mean there’s no standing, masks all round, and a hall that’s set out like an examination room!

Frankly, none of that really matters. The break has allowed the new owners to improve facilities, although the venue, with its sprung dancefloor, (which at least meant you could ‘feel’ when someone was bringing you a drink!) is little changed, apart from the blackout curtains along each wall and twinkly lights on the ceiling. The only thing that’s important tonight is that the event is utterly absorbing, in a way that makes all the little inconveniences irrelevant. 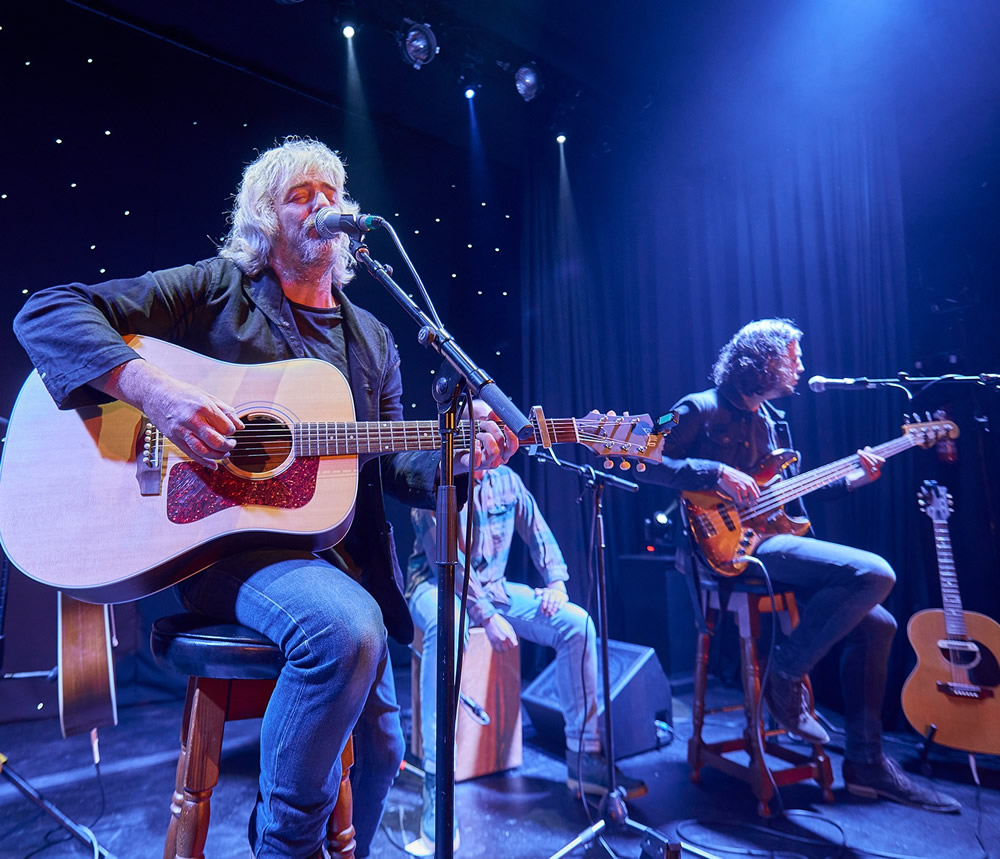 John Bramwell enthrals the crowd, both solo and as part of his ‘partial’ Full Harmonic Convergence, in a full on show which kicks off a series of live dates for the ex-I Am Kloot frontman.

Support comes in the form of Manchester’s Dave Fidler, who, after being introduced by Bramwell, later joins him on stage as part of his slimmed down ‘Convergence; (former Kloot session musician Alan Lowles, couldn’t make the gig). What started out as an invitation to support Bramwell for just seven dates, turned into a 300 date tour for the Fidler. This subsequently led to an invitation to join the quintet with the addition of virtuoso cellist Harriet Bradshaw.

Bramwell jumps on stage to introduce Fidler, who regales us with an engaging selection of songs from his back catalogue. With a powerful and confident delivery, his brand of delicate folk goes down a storm. His guitar playing is impeccable, although navigating the soundboard to accompany himself with drums and tambourine on the closing track, comes with a rather one-man-band-style-leg-stomping challenge! Fidler is an accomplished troubadour, a Gerry Rafferty style character with tales to tell of life, love, and hope.

John Bramwell is like your favourite uncle; warm, friendly, and funny, with a Manc Lilt that is utterly intoxicating. The anecdotes, quips, and one-liners help glue the set together, where every re-tune, fluff or false start appears part of the show. Frankly, this most engaging of characters could get away without playing a single note, with his comic timing and funny stories. The most remarkable of guitarists, the songs feel organic, like they have always existed and the way the words slip from John’s lips feels the most natural thing in the world. 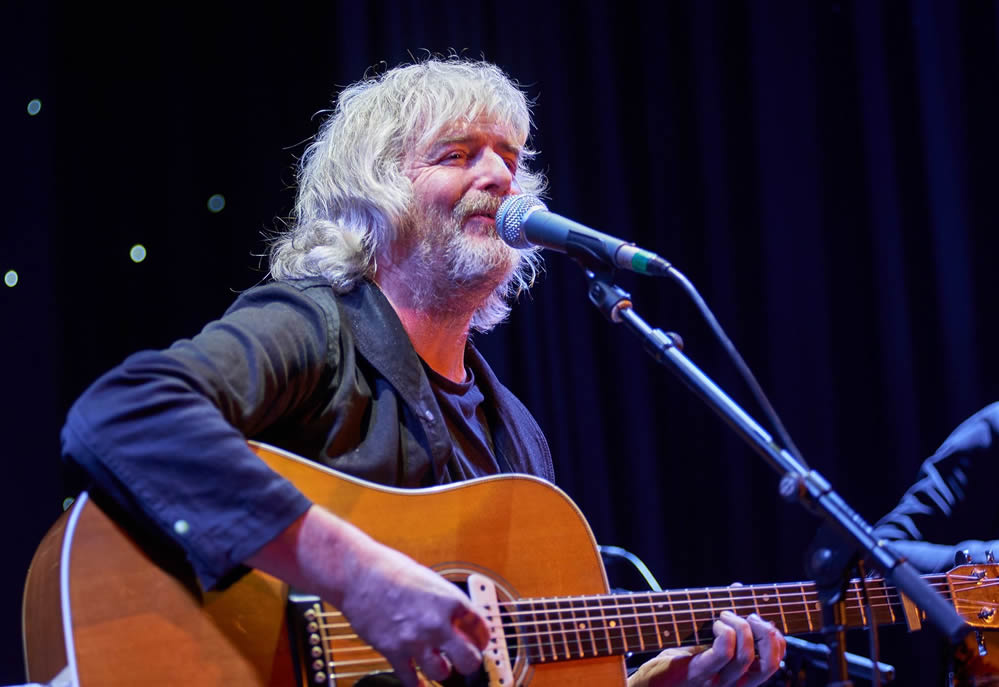 Bramwell splits the show in two parts. First, as the soloist, the familiar troubadour; one minute delicately tumbling words into the mic, the next, headbanging, hair flying forwards, hammering the strings of his guitar. He mixes I Am Kloot classics like From Your Favourite Sky with newer songs like Times Arrow from his recent album Leave Alone The Empty Spaces, and the even newer, from upcoming album The Light Fantastic, which, having been delayed from 2020 is due any time now. He even slips in a track which he’s written only two weeks ago, complaining that that with each new song he writes, the other 302 won’t leave his head!

During the second part of the show he brings Fidler back on stage along with cellist Bradshaw. The interplay on the ensuing songs between them is complicated, entwined and enchanting with the cellist underpinning and punctuating the soaring harmonies.

Before the penultimate track To The Brink, which he precedes with ‘If you’d like to join us on the solo, that would be beautiful or indeed any part of the song, remembering that that if you’re out of tune, and out of time, that that is artistically correct’. There’s a short pause as he attempts to mount the stool, which he later discards after the comment ‘John Bramwell, the Val Doonican years…’. Inevitably, this song is the highlight of the night and despite some of the audience joining in on the first verse, the chorus is taken away by Bradshaw’s exquisite cello. The recorded version has violins, but her version seems to take the song to an even higher level. The band finishes with the classic Northern Skies before leaving the stage to rapturous applause. 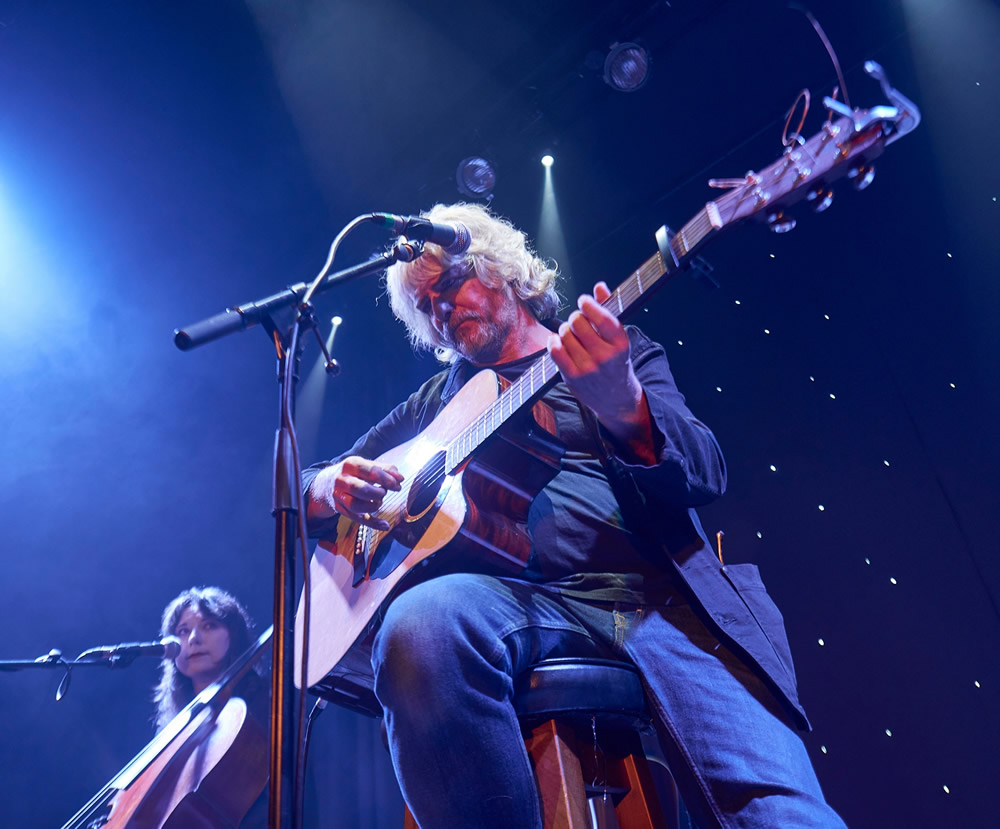 Bramwell has been filling his time whilst at home, writing out lyric sheets which he’s been selling on his website. It’s been a tough time for everyone, and to see this man in full flow,  was pure joy. We’ve been stuck in for way too long, so get out and see this genius at work if you possible can. You will not be disappointed!

Bramwell played a follow up show at the Bowdon Rooms the following night and is appearing at the following shows around the country:

Further Gigs at The Bowdon Rooms

Article by Nigel Carr. More writing by Nigel on Louder Than War can be found in his Author’s archive. You can find Nigel on Twitter and Facebook and his own Website. Photos by Nick Provan© – Use of these photos without permission is breach of copyright. Nick on Houzz – Nick on Facebook