Lockheed Martin, the nation’s top defense contractor, forced 13 executives including a three-star general to complete a three-day Zoom course so they would ‘unlearn their male privilege’.

The course was led by Portland-based firm White Men as Full Diversity Partners (WMFDP). It was carried out last June, at the height of Black Lives Matter protests in the wake of George Floyd’s murder, and involved 13 Lockheed employees dialing in for 16 hours. Details of the three-day course last June were obtained by City Journal.

It was led by three men from WMFDP; Jim Morris, Mark Havens, and Michael Welp, one of the firm’s co-founders. Bill Proudman, the other co-founder, didn’t take part.

It’s unclear whose decision it was to have the training, or how much Lockheed paid the firm for the 16-hour training course.

On the firm’s website, they name the Colonial Pipeline, the City of Portland, NASA, Boeing, Exxon Mobil, Dell, Kohler, Ohio State University, USAA and Suncor as other clients.

The session Lockheed paid for was a 16-hour, virtual White Men’s Caucus from White Men As Full Diversity Partners 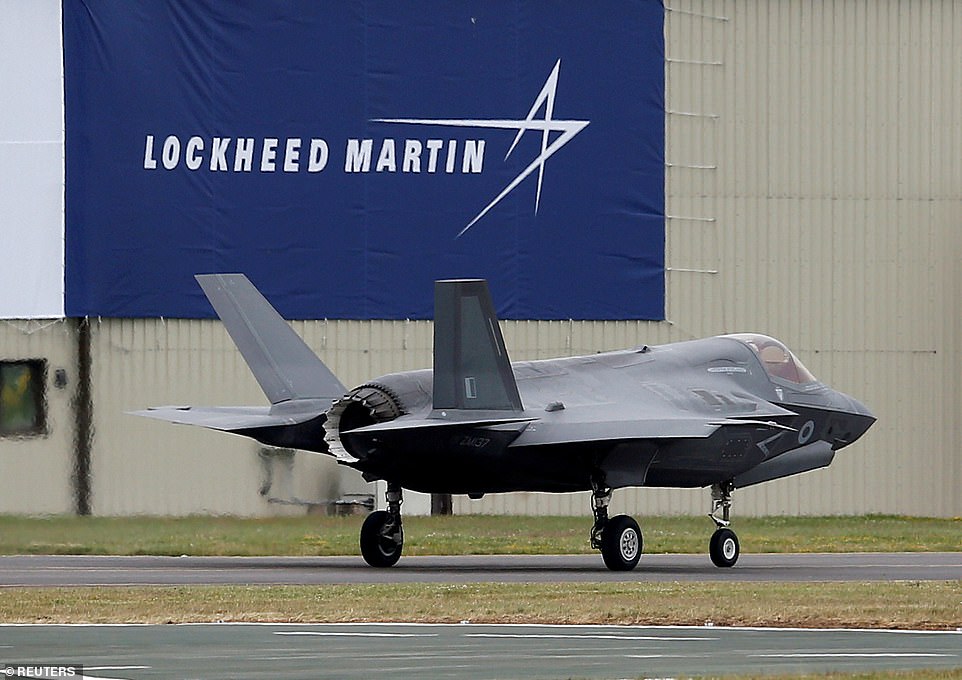 Lockheed Martin, the nation’s top defense contractor, forced 13 executives including a three-star general to complete a three-day Zoom course so they would ‘unlearn their male privilege’

Lockheed Martin takes in $6billion a year and 70% of that comes from government contracts.

The training included the generals having to recite statements of privilege like ‘my body belongs to me’, and statements of frustration from the perspective of minorities like ‘I’m tired of being black.’ 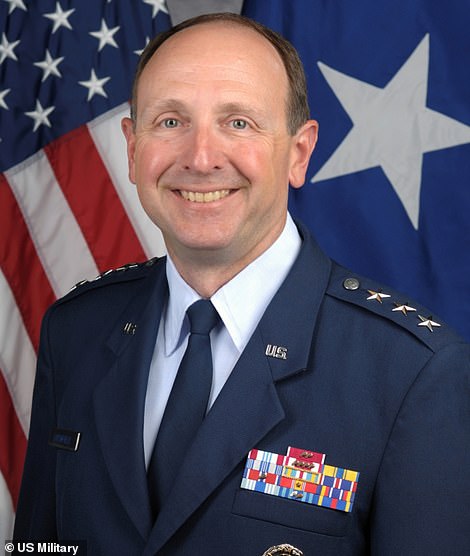 They also had to watch videos by beauty brands Dove and Pantene about self-esteem and body positivity.

Some of the talking points included the men adopting ‘radical new mindsets’ and having to forget their ‘problem solving’ tendencies to ‘listen’ instead and accept that ‘life is a journey’.

At the start of the session, the men were asked to list connotations of ‘white privilege’ during a ‘free association’ exercise.

The trainers wrote down what they said and the connotations included ‘old,’ ‘racist,’ ‘privileged,’ ‘anti-women,’ ‘angry,’ ‘Aryan Nation,’ ‘KKK,’ ‘Founding fathers,’ ‘guns,’ ‘guilty,’ and ‘can’t jump’, according to City Journal, which obtained the itinerary from the course and a screenshot of the men taking part in it.

The trainers also presented the men with 156 statements of privilege.

Some of the white privilege statements included being able to find affordable housing if they move, being able to get a haircut, and being ‘encouraged’ to make as much money as they can.

Some of the male privilege statements the trainers listed included; ‘Unlike a woman who decides to keep her name when she marries, I am not interrogated and shamed by friends and family for doing the same thing’. 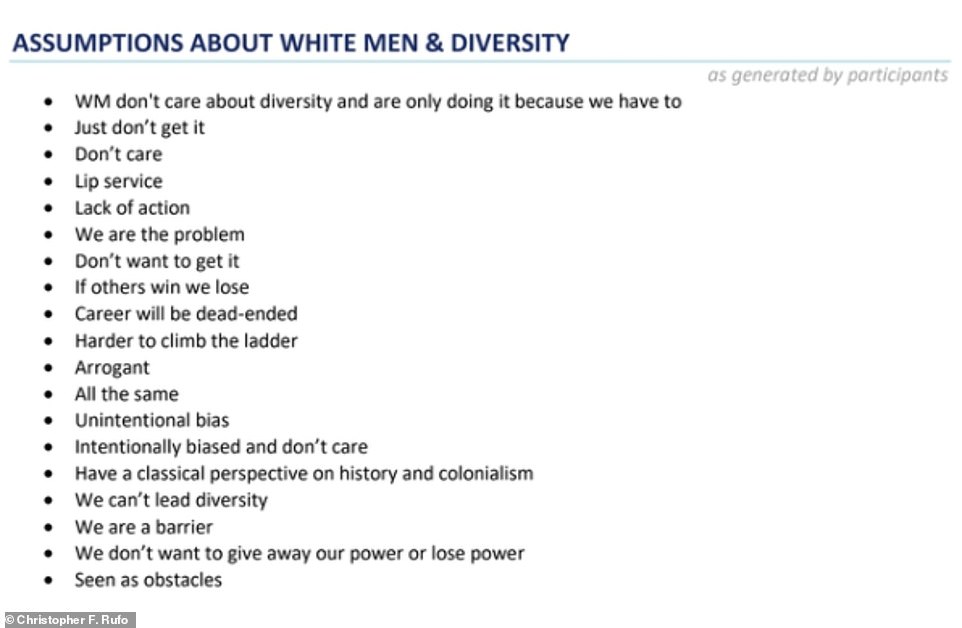 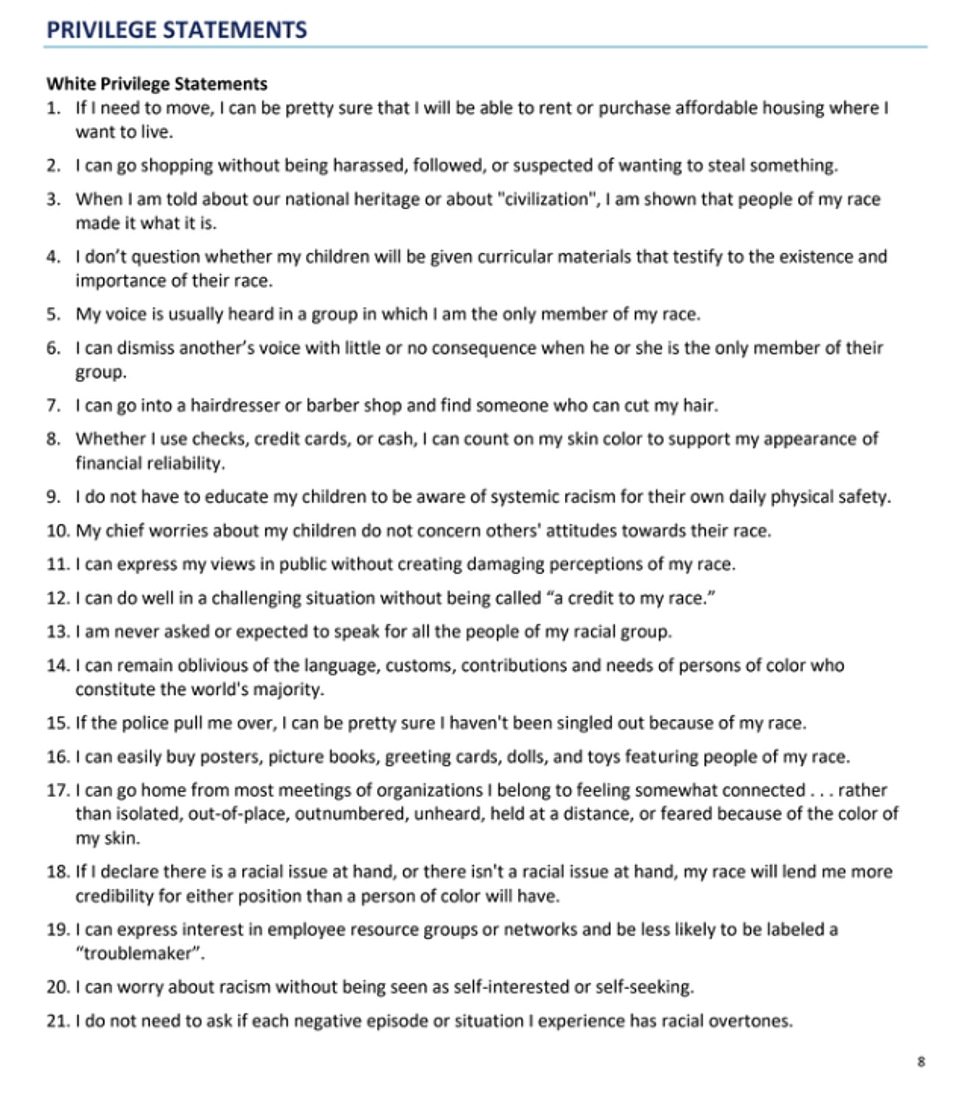 The group of 13 men were asked to recite these ‘statements of white, male and heterosexual privilege’ like the ones listed above 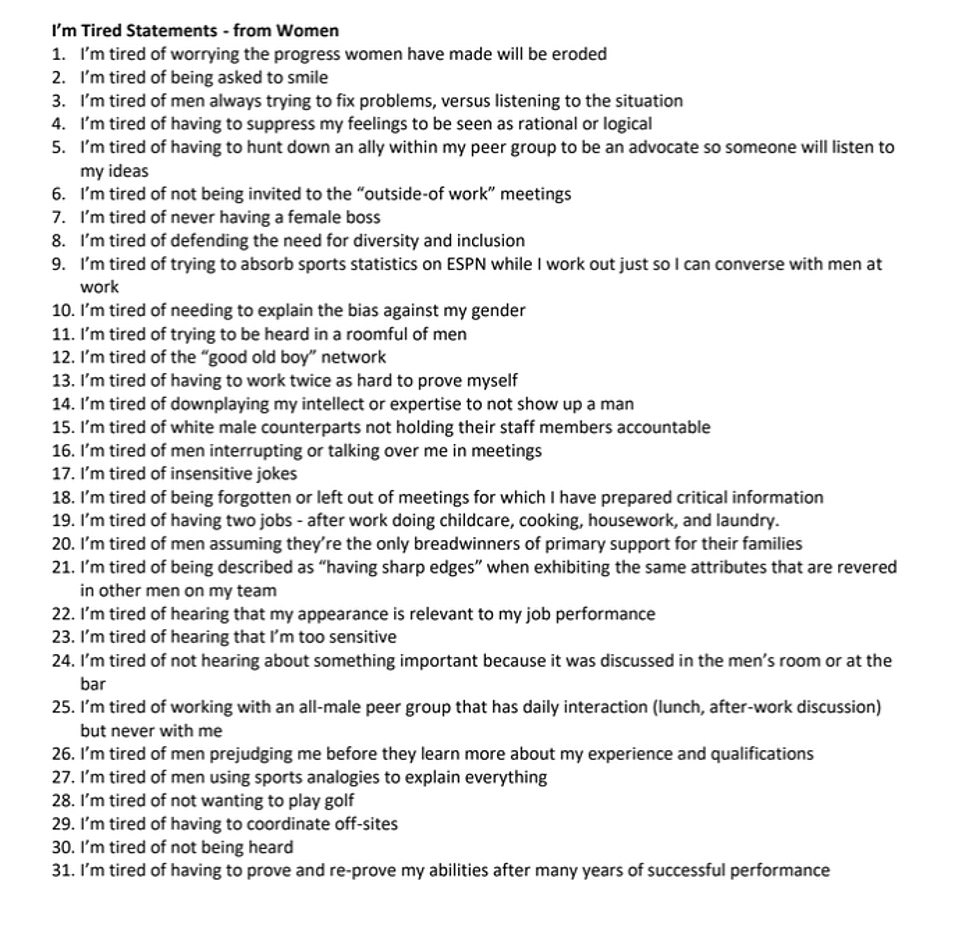 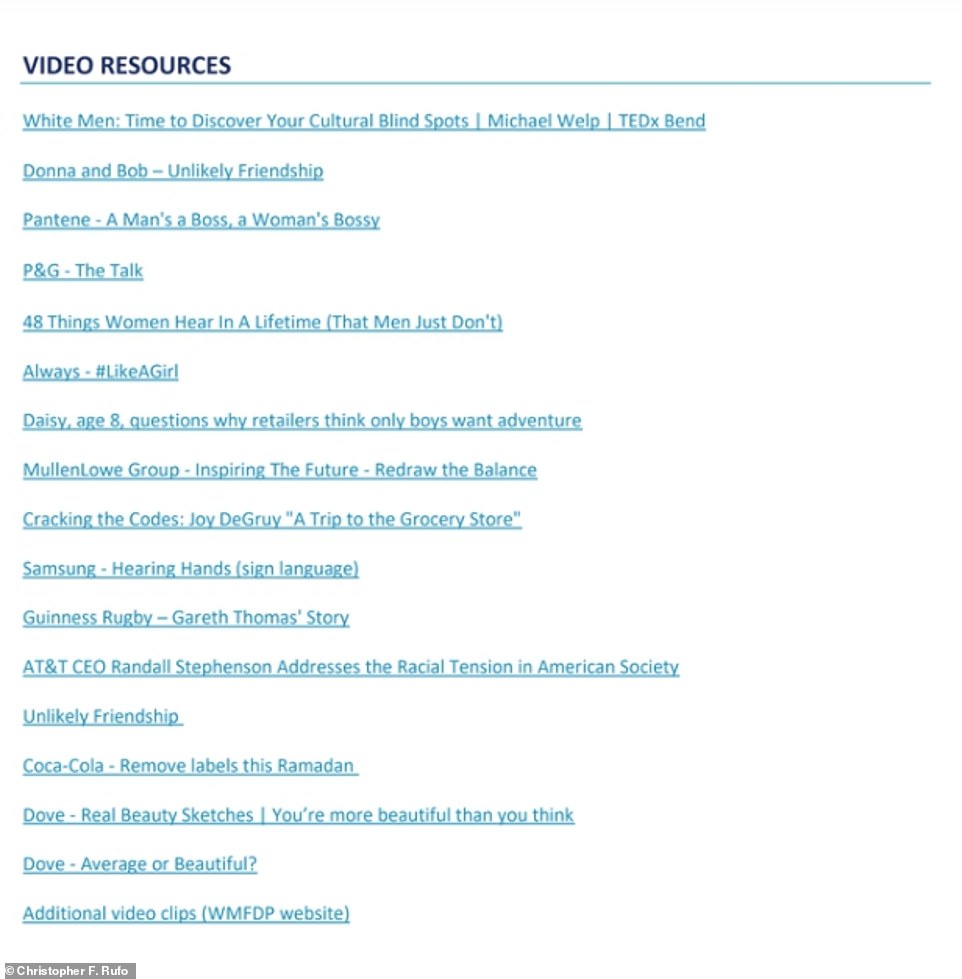 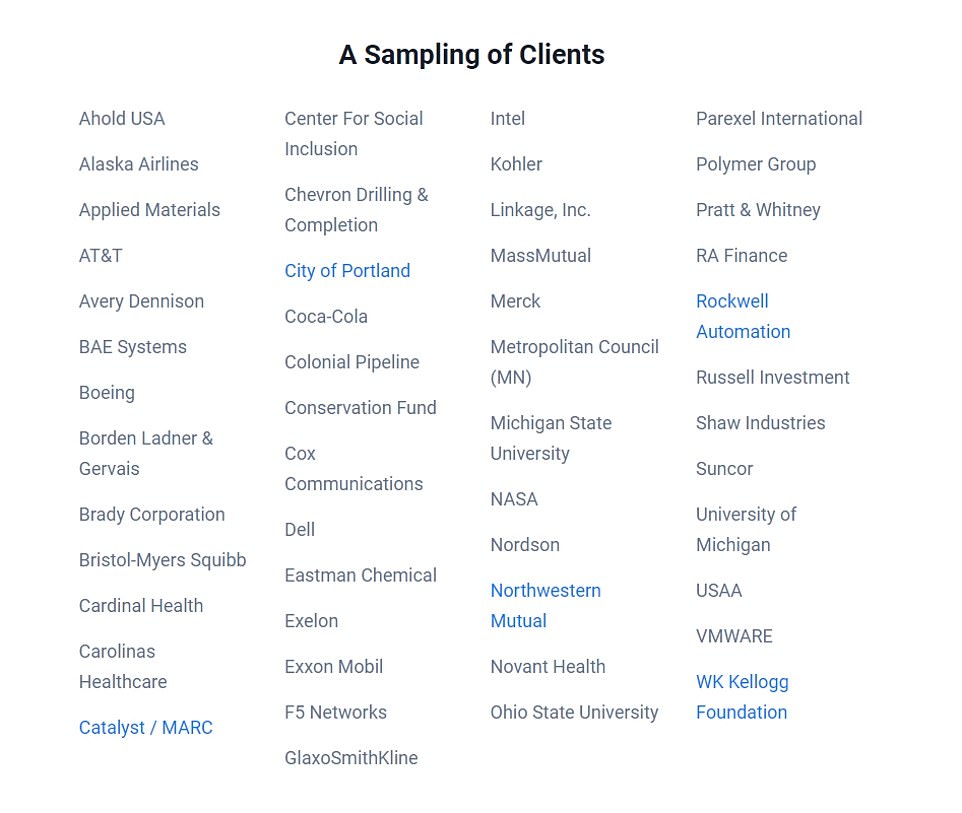 The firm hired to lead the training is called White Men as Full Diversity Partners. Its founder is Bill Proudman.

The firm was formally started in the late 1990s and their first training lab – White Men and Allies Learning Lab – was launched in 2000.

Now, they offer a range of courses including the White Male Caucus – which is the course Lockheed paid for – and free webinars on their website.

It’s unclear how much Lockheed paid for the course.

Some of the free webinars on the company’s website include ones titles ‘When Our Identities Conflict—Learning to See and Hear Each Other Across Difference’ and ‘Unscripted: Who Gets to Belong?’

They also listed the comment: ‘I am not expected to “put out” because of my gender’ and ‘my body belongs to me. my reproductive organs are not seen as the property of other men/the government’.

The heterosexual privilege statements included ‘I am not asked to think about why I am straight’ and ‘I can have friendships with or work around children without being accused of recruiting or molesting them.’

The group was also asked to ‘discover the roots of white male culture’ focusing on associated traits including ‘rugged individualism,’ ‘hard work,’ ‘operating from principles’ and ‘a can-do attitude.’

Then, they had to recite a series of statements from the perspective of a minority.

All of them started with the words ‘I’m tired’.

They had to watch videos including one titled ‘White Men: Time to discover your cultural blindspots’, ‘Always: #LikeAGirl’ and ‘Coca Cola, Remove labels this Ramadan’ and an ad campaign by the skincare brand Dove called ‘Average or Beautiful?’

Another was Pantene’s ‘A Man’s a Boss, A Woman’s Bossy’.

When asked at the start of the training what they thought was in it for them, the Lockheed employees replied: ‘I won’t get replaced by someone who is a better full diversity partner’, ‘[I will] improve the brand, image, reputation of white men,’ and ‘I [will] have less nagging sense of guilt that I am the problem.’

Lockheed told Chris Rufo, the journalist who revealed the training: ‘Lockheed Martin has robust employee training programs focused on our core values of doing what is right, respecting others and performing with excellence.

‘Like many corporations, we employ multiple vendors and continuously evaluate the effectiveness of training programs to ensure they are aligned with our values, applicable laws and regulations, and incorporate employee feedback and best practices.’

Rufo tweeted that it was an outrage taxpayer dollars might be being used on such training.

In 2018, 70 percent of Lockheed’s income came from contracts with the government.

Toronto parents would save the most under Liberal child-care plan