With Louder Than Life less than a month away, to be held September 23, 24, 25, and 26 at Highland Festival Grounds At KY Expo Center in Louisville, KY, festival producers Danny Wimmer Presents have announced additional onsite entertainment, the full bourbon lineup and unique food offerings for The World’s Largest Rock ‘N’ Roll Whiskey Festival.

Single day and weekend passes for Louder Than Life are on sale now, with General Admission passes starting at $99.50* for single day (Thursday), $119.50 for single day (Friday, Saturday or Sunday), and $289.50* for 4-day (*plus fees). Additionally, fans can purchase a 2021 + 2022 combo passes for only $50 down, with 11 months to complete payments, giving fans the most affordable plan possible.

Attendees can also stay up to date, plan their schedules and tune in for live updates by downloading the official Louder Than Life Mobile App. The app is available for download on iOS and Android platforms.

Louder Than Life will feature 70 music acts over 4 days, with performances on three stages, along with award-winning bourbons, whiskey, spirits, craft beer, and the best food Louisville has to offer. Festival attendees will enjoy a variety of onsite food and beverage experiences, as well as sponsor activations that celebrate the bourbon culture and culinary heritage of this unique American city. 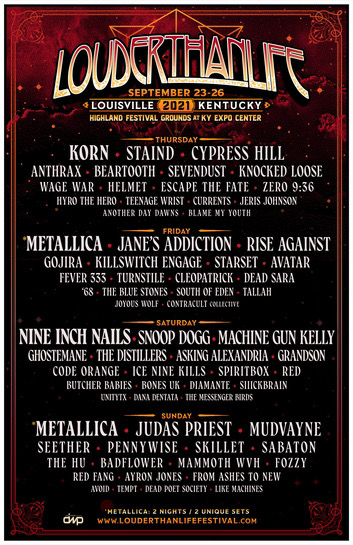 Additional bourbon, food & beverage, and other experiences available onsite include:

-Silver Dollar Hunter’s Club – featuring vintage bourbons dating as far back as the 1930s, as well as contemporary selections

The Highland Festival Grounds at KY Expo Center are located at 937 Phillips Lane in Louisville, KY.

A 'just recovery' must include housing