A two-year-old Melbourne girl was badly burnt in the kitchen after the baby gate was accidentally left open.

Jessica Gardner didn’t take any chances when it came to keeping her daughters safe inside their home.

In September last year, the Melbourne mum and her then husband Daryl – who are parents to Chloe, five, and Gracie, two – re-installed their baby gates across the two entrances of their kitchen when a minor accident gave them an awful scare.

“Gracie had burnt her fingers on the stove while I was at work, so as soon as I found out, we put the baby gates back on, and our rule was that whenever the stove was on, the gates would be closed,” Jessica tells Kidspot.

Just two weeks later, on September 27, the 35-year-old went to her part-time job as she did every Friday while Daryl remained home looking after the kids.

That day, however, the father-of-two decided to clean some motorcycle parts in a pot on the gas stove in the kitchen.

Within moments, the stove caught alight – causing a raging fire.

As Chloe watched on in horror from the lounge room, Gracie ran into the kitchen where her dad was trying to put out the fire and became engulfed in flames.

Two-year-old Gracie was badly burnt when the stove caught fire in the kitchen. Source: Supplied to Kidspot

“The baby gate had accidentally been open that morning”

Tragically, the baby gate latch had accidentally been open that morning.

“I got a call to say there was a fire in the kitchen and Gracie had been hurt,” Jessica vividly recalls of the devastating moment her life changed forever.

“I panicked while Daryl tried to calm me down, saying ‘It’s not that bad’.”

Jessica rushed home, managing to arrive just in time to join her daughter in the ambulance before it left for the hospital.

Despite not being able to get a glimpse of her daughter’s face or body, the distraught mum instantly crumbled to pieces, realising her daughter’s burns were far worse than she could ever have imagined and now feared the injuries could end her life.

“I only saw the back of her head. She was missing most of her hair,” she cries as she retells the horror. 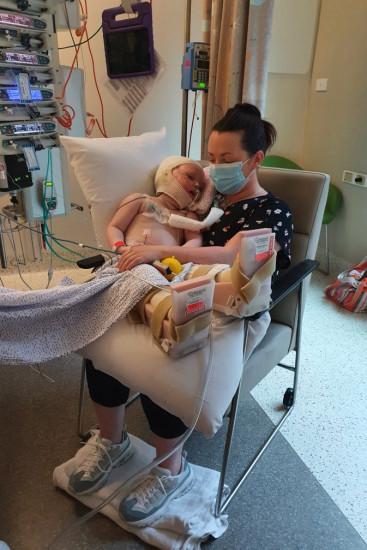 “It was flesh with no skin and so swollen and red they couldn’t tell if her airways had been burnt from the smoke. She couldn’t open her eyes… she just kept saying, ‘Mummy, Mummy’.” Source: Supplied to Kidspot

“She had flesh with no skin and just kept saying, ‘Mummy, Mummy’”

Jessica will never forget the brief torturous few moments she laid eyes on her little girl before she was whisked away into the emergency room.

“That’s when I first saw her face,” the anguished mum says.

“It was flesh with no skin and so swollen and red they couldn’t tell if her airways had been burnt from the smoke. She couldn’t open her eyes… she just kept saying, ‘Mummy, Mummy’.”

Gracie was immediately put into an induced coma, where she remained for the next five weeks.

“They told me she wouldn’t make it unless she was in a coma,” Jessica says.

Gracie also underwent emergency skin grafting surgery that day to treat full thickness burns to her entire face, scalp, left hand, abdomen, both legs and feet that covered 40 per cent of her body.

“When she came back, she had no skin on her face and no hair,” Jessica says with the horrifying image still clear in her mind,

“It was horrible. I looked at her, thinking, ‘Is this my baby?’ It didn’t look like her anymore.”

Gracie’s injuries were so severe that she was forced to stay in hospital for three months after the accident and in just nine months since that fateful day, the little girl has had to endure nine surgeries removing skin from other parts of her body and grafting it to her face and lower body. 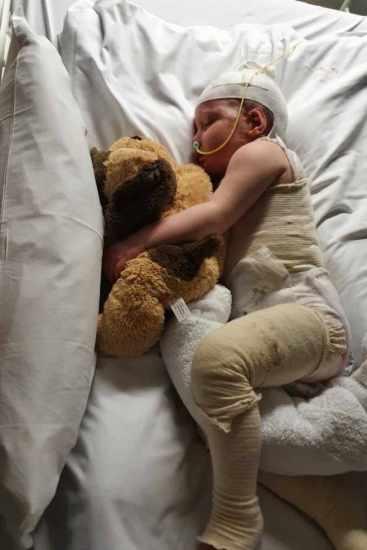 Her ears were so badly damaged that most of her right ear and parts of her left ear are now missing. Miraculously, her hearing and vision hasn’t been affected so far.

“I spent every night in hospital with her, lying awake thinking, ‘Why her? It’s not fair. Why did I go to work that day?’” Jessica says.

Gracie – who had only just taken her first steps at 16 months – had to learn to walk all over again at two-and-a-half, but this time with terrible burns on the tops of her feet.

“It was an even bigger deal this time,” her proud mum smiles. “Now we have to stop her from running to protect her skin.”

Jessica spends at least two hours a day tending to her daughter’s delicate skin and helping her into her burn-suit, which is made up of thin sheath-like pieces of clothing covering her feet, legs, hand, and face.

Gracie’s skin is still so fragile that it is too dangerous for her to be outside when the UV is higher than four, which is an otherwise moderate level, even if she is fully clothed and wearing sunscreen.

“Minor sunburn for someone else is extreme sunburn for her,” Jessica explains. “She’s also at extreme high risk for skin cancer.”

Gracie also can’t go into sandpits as it is too abrasive for her skin and can cause infections, which the toddler is already heavily susceptible to.

“She’s only just started to be able to go down a slide as the friction hurt too much before. Any bump can leave a permanent scar, it takes a very long time for her to heal from anything.”

Jessica, who has since moved from the rental home that was heavily damaged by the fire, now lives with her parents and her daughters, and takes care of Gracie full time. 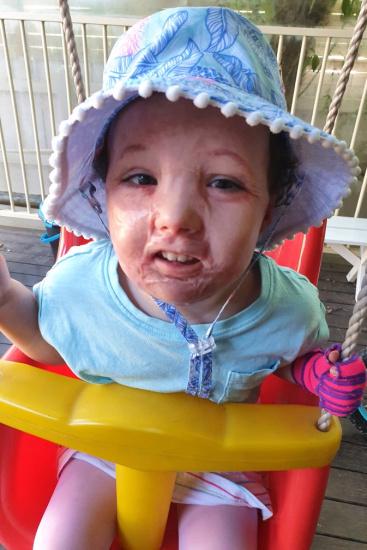 “Between me and my mum, there is always someone watching Gracie, and she has a safe play pen now too – she’s never in the kitchen.” Source: Supplied to Kidspot

The little girl will likely need to wear some form of skin protection and require skin grafting for the rest of her life.

“Between me and my mum, there is always someone watching Gracie, and she has a safe play pen now too – she’s never in the kitchen.”

Incredibly, despite the pain Gracie endures and limitations placed on her, the brave little girl’s bright, bubbly personality has returned, bringing joy to all those around her.

“She’s back to her normal, happy self,” Jessica says of her resilient daughter.

“All she talks about is her toys and what she wants to watch or play with. If she wasn’t the same cheeky little girl she was before, it would be a lot harder to cope with.”

“I just wish the baby gate was locked like it was supposed to be, then she wouldn’t be going through this.”

Every week, 17 children are treated at a specialist burns unit in Australia and New Zealand. Kidsafe Victoria’s National Burns Awareness Month aims to educate caregivers about how to prevent and treat children’s burns. Jessica’s family has also set up a GoFundMe campaign to help with Gracie’s recovery.

The Challenge of Getting on the Podium at the CrossFit Games

Struggling US renters at risk as eviction moratorium expires