A mother-of-two has revealed she had morning sickness that was so debilitating she lost two stone while pregnant and was bedridden for three months.

Sarah Vickery, 38, suffered a complication during her second pregnancy called hyperemesis gravidarum, an extreme type of morning sickness which causes severe nausea – the same condition battled by Kate Middleton during her three pregnancies.

The public health nurse was unable to eat or drink without vomiting for three months and admitted she would have been forced to terminate the pregnancy without support from her family.

She saw her weight plummet by two stone as a result of the condition, and became so weak that she was left bedridden and needed to go to hospital six times ,while husband Matt, 39, took care of their two-year-old, Hannah.

However, despite the complications she delivered a healthy baby boy, Travis, who is now one week old and after giving birth, Sarah got her appetite back.

Sarah said: ‘At around five weeks pregnant I started feeling tired and sick and I was vomiting a few times a day but within a week I was being sick all day long.

‘I couldn’t get out of bed because as soon as I moved I would vomit. 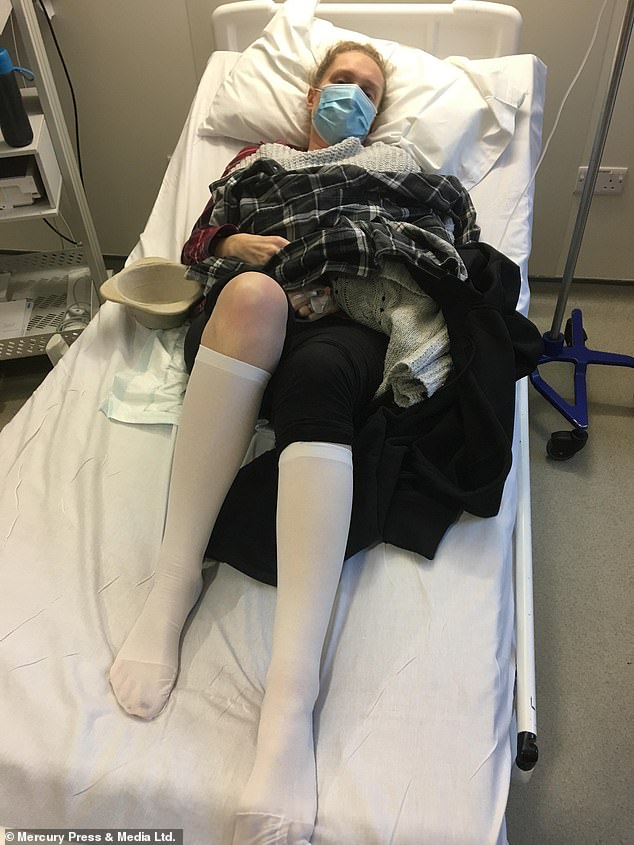 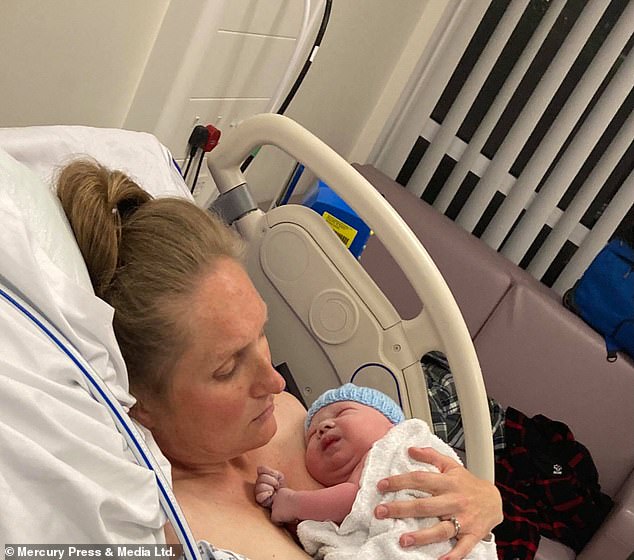 However, miraculously she has since delivered a healthy baby boy, Travis, who is now one week old (pictured together in the hospital) and after giving birth, Sarah got her appetite back 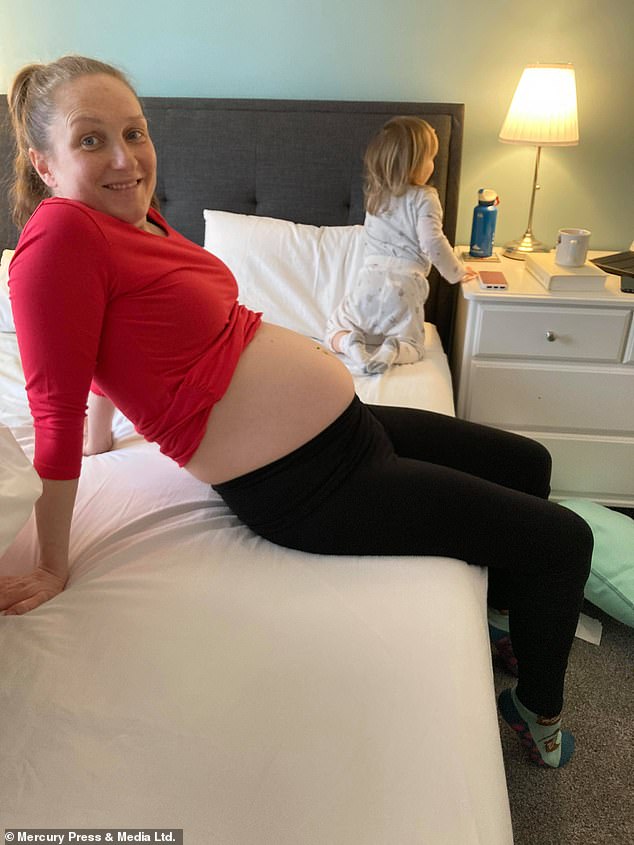 The public health nurse was unable to eat or drink without vomiting for three months because of the severe nausea which started at week five (pictured at 30 weeks with Hannah, two)

‘The list of things I could eat got smaller until there was nothing and I couldn’t drink either.

‘I had just come back from holiday when I found out I was pregnancy so people had commented on how well I looked. Then the next time they saw me I was really thin.

‘I couldn’t walk, I couldn’t look after my little girl and I missed her second birthday because I couldn’t get downstairs. It was really scary.

‘If I didn’t have my husband and family I would have had to have a termination and some women who suffer with it do end up having to do that.

‘I needed assistance to get to the shower and to look after a toddler was impossible.’ 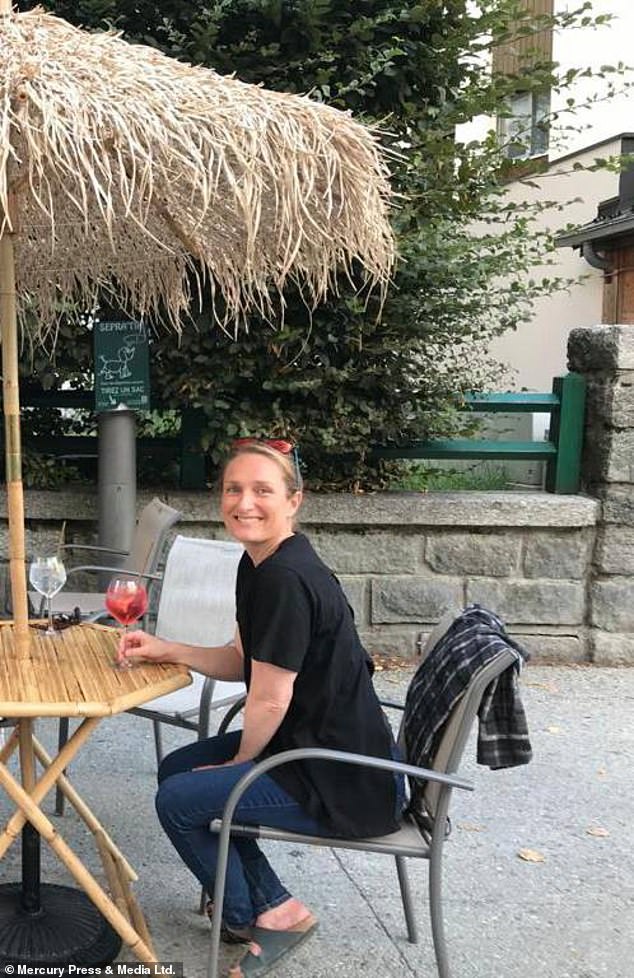 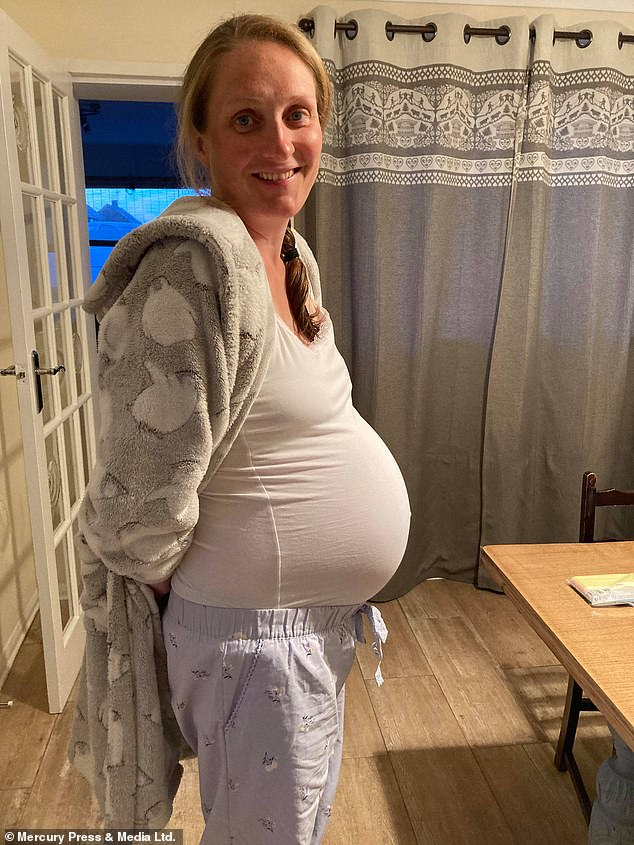 She admitted she would have been forced to terminate the pregnancy without support from her husband Matt, 39, and her family (pictured 40 weeks pregnant))

Sarah was unable to eat or drink for three months without vomiting, was forced to take time off work at eight weeks and was hospitalised twice before she was eventually put on steroids at 17 weeks to help with the symptoms.

She said: ‘The steroids changed the symptoms. I had no appetite, no enthusiasm and I just felt out of it. It felt like a constant hangover. 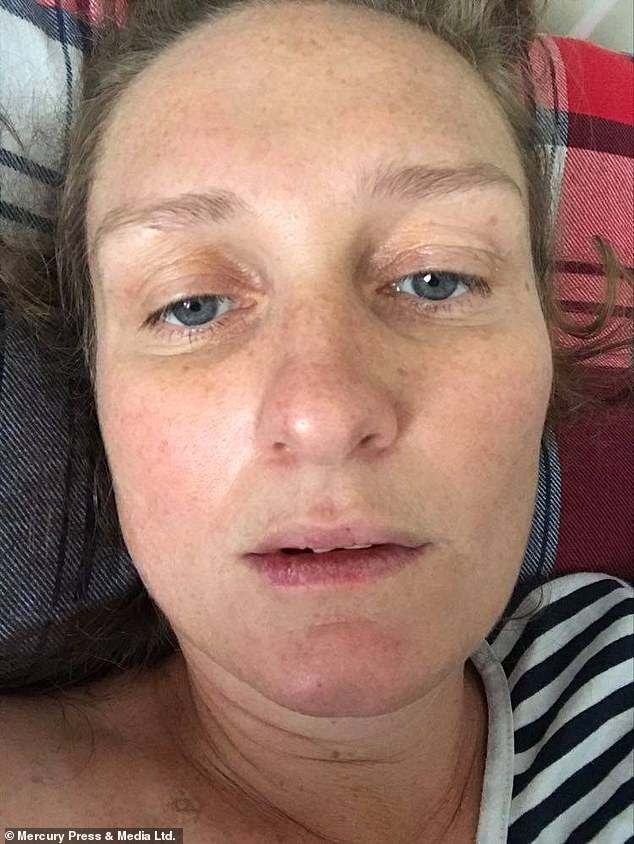 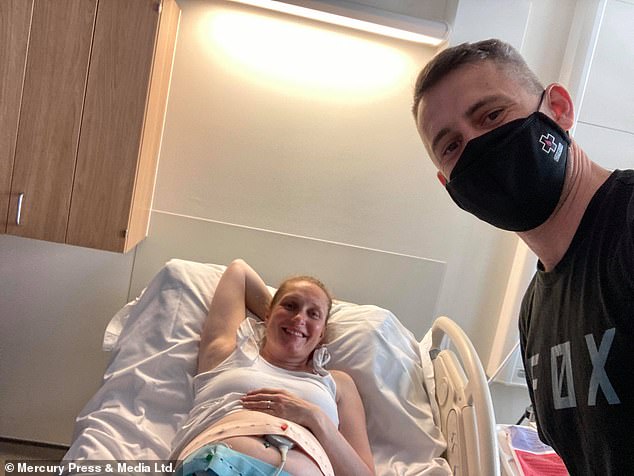 After giving birth, Sarah said her symptoms disappeared and she was able to eat ‘the biggest meal’ (Pictured: Sarah during labour with husband Matt)

What is Hyperemesis Gravidarum and how can it be treated?

Mild cases of HG are able to be treated with a change in diet, rest and antacids. But more severe cases can force the expectant mother to stay in the hospital so they can receive the nourishment they need.

About 70 to 80 percent of women will experience some form of morning sickness throughout their pregnancy.

But the number of women who suffer from HG is not well known because the majority will often go unreported because they treat it at home or in an out-patient care.

The cause of HG remains unknown, but the severe nausea is believed to be due to the rise in hormone levels in the women’s body as it changes to house the growing fetus.

HG symptoms typically start during the first trimester at the four to six week mark and peak when the woman is nine to 12 weeks along.

While most women will experience relief as the enter their second trimester at 14 weeks, some will have severe nausea throughout the course of their pregnancy.

‘I definitely won’t have anymore. If I’d have had this experience with my first pregnancy then there’s no way I would have had another.’

Miraculously, despite concerns over the health of mum and baby, their son Travis, now one week old, continued to grow and almost immediately after the birth, Sarah’s symptoms disappeared.

She said: ‘I feel like I’m me again. I can get excited again.

‘I can enjoy spending time with my toddler and just to leave the house which I couldn’t even think about before.

‘The baby was alright and getting everything he needed even though I was losing weight so that was reassuring.

‘I’ve got my huge appetite back and after I’d given birth I had the biggest meal.’

Few Israelis wanted a leader to the right of Netanyahu. Naftali Bennett is set to oust his old boss anyway.

Kamala Harris to meet with Guatemala’s leader on migration

Carla Zampatti to be honoured with NSW state funeral.

Donald Trump finally has the obsequious press he always wanted

Kathryn Dennis and Chleb Ravenell Celebrate One Year Together!!

Donald Trump finally has the obsequious press he always wanted