The government’s long-awaited action plan for the missing and murdered Indigenous women and girls inquiry is more visionary than substantive and pushes concrete action off to yet another day, Indigenous women are saying two days before its release, with one partner group saying it’s backing away from the “toxic” process.

The Native Women’s Association of Canada said it could no longer continue as a partner to the “toxic, dysfunctional” action plan process, and has pulled its name from the document, which will be released on June 3, the two-year anniversary of the MMIWG inquiry’s final report.

It was a combination of factors that led the organization to send a letter to Crown-Indigenous Relations Minister Carolyn Bennett (Toronto-St. Paul’s, Ont.) a couple of weeks ago, said NWAC CEO Lynne Groulx. She said the association wasn’t permitted to sit on working groups where key decisions were made, experienced “lateral violence,” and it became apparent the document being drafted would put off action in place of more “red tape” and bureaucracy, which she said is not what families of survivors and Indigenous women need in response to the 231 calls for justice laid out in the inquiry’s report released two years ago.

“They’re expecting to see action on those specific initiatives and a real plan. They’re not expecting [Ottawa] to say, ‘Here’s part of a plan, here’s a … policy-type visionary document, and we’ll bring you the other half,” at an unspecified time, she said, noting late in the process it seemed to NWAC the “government didn’t seem to have a plan that was concrete initiatives that were measurable and costed out.”

A May 17 draft of the government’s action plan obtained by The Hill Times sets out a list of 21 short-term priorities that it said can be started within one to three years and are tied to specific inquiry recommendations related to culture, human security, health and wellness, and justice. It also promises the development of another document—“an in-depth implementation plan for the national action plan”—that will offer “more specific information” on these priorities including “funding, timelines, and who is responsible for implementation.” It doesn’t say when the implementation plan will be produced, but said work to develop it is part of eight “immediate” steps to start in the next 12 months.

The draft, which didn’t yet include the province or territorial submissions, repeatedly described the action plan as an “evergreen” document, and noted that it is intended to lay a “strong foundation” but is adaptable, requires monitoring, and further co-development and course correction “as required.” Much of the document details the various groups co-developing the action plan, its vision, and guiding principles, as well as monitoring progress in the long term, including through a data strategy for the national action plan.

Developing a coordinated strategy to address the inquiry’s recommendations was listed first in the 231 calls for justice outlined in the June 2019 final report. In that first demand, the commissioners do not separate action from implementation. In fact, they say the action plan should include “devoted funding and timetables for implementation that are rooted in the local cultures and communities of diverse Indigenous identities, with measurable goals and necessary resources dedicated to capacity building, sustainability, and long-term solutions.”

Ms. Bennett’s office said “to be faithful to the task” in that first call, “we knew an inclusive approach was needed to include the diversity of voices and partners,” and the plan was developed with more than 100 Indigenous women and partner organizations, including families and survivors, as well as provincial and territorial governments. Ottawa provided funding to these organizations, the office said, including NWAC, for their participation in this structure. The statement stressed the action plan is being released by all partners and contains a “federal component,” and the development of all components is “a priority.”

Ms. Bennett’s office did not respond to questions about the distinction between the action plan and implementation plan, and whether, or why, the government is waiting to determine funding and timelines.

“It’s another delay, a tactic, and also delaying the funding resources that families of survivors need now. We have people today going missing and murdered. Things have got to change now,” said Judy Wilson, chief of Neskonlith First Nation, secretary-treasurer of the Union of B.C. Indian Chiefs, and part of a B.C. coalition of about 30 organizations representing a large cross section working on the issue, though not directly tied to any of the plan’s working committees. Still, she said information has been shared with them throughout the process, and they have, in turn, been warning the federal government that its plan, as it stands now, is “not substantive enough.”

“Canada’s genocidal legacy is going to continue because there’s no change, real leadership, and real commitment. We just get the flowery reconciliation speeches that fall short in action,” said Ms. Wilson.

The language about it being an evergreen or living document is “alarming” to Pamela Palmater, a Mi’kmaw lawyer and professor and the chair in Indigenous governance at Ryerson University.

“That’s code for we didn’t come up with a plan,” she said, stressing she’s not laying that problem at the feet of the advocacy groups. A plan that doesn’t have concrete actions, clear timelines, and measurable outcomes is not acceptable, she said.

“We’re talking about genocide. We need an emergency national action plan that is tripartite: federal, provincial, and Indigenous governments,” and the response should be treated as urgently as the pandemic, she said. “We know, clearly, money can come out of nowhere for very important things.”

In the recent federal budget, the government earmarked $2.2-billion in funding to address the “national tragedy” of missing and murdered Indigenous women and girls. That demonstrated the government’s “ongoing commitment” to respond to the inquiry report “with concrete action, with a focus on working with many partners to ensure real change takes place in communities across Canada,” said Ms. Bennett’s office, and “lays out a plan,” but as CBC reported, advocates said the budget, in their estimation, lacked such a plan.

Planned to be spent on the preservation of culture and heritage, addressing racism and discrimination in the health-care system, supporting culturally responsive policing, and more, the budget investment is in addition to the $781.5-million set out in the fall economic statement. Promised over five years, that funding will go, in part, towards new shelters and transition housing, and to address the overrepresentation of Indigenous people in the criminal justice system.

The May 17 draft plan also lists eight “immediate next steps” the government and representative Indigenous organizations will “focus on” over the next 12 months. They include immediate support services for survivors and family members; public awareness and training; “accountability mechanisms” for reporting on the 231 calls for justice; “immediate” development of an implementation plan with involvement of survivors and family members; an independent oversight committee or working group for the action plan as well as an oversight body. Asked if any have funding attached, Ms. Bennett’s office did not respond.

“It’s a purely bureaucratic approach to this issue of missing and murdered women,” said Ms. Wilson of the eight expected immediate promises.

One promise suggests some dollars will be earmarked, promising funding “to establish accessible healing and support services for survivors and family members.”

‘Difficult and challenging situations’ during the process, Bennett’s office says

Calling the action plan’s development “important and challenging work,” Ms. Bennett’s office said the “work to date” is in “direct response” to the inquiry’s calls for justice.

“With so many voices and perspectives coming together, we recognize that there have been some difficult and challenging situations. No one has lost sight of the importance of the transformative change needed to keep Indigenous women, girls, and 2SLGBTQQIA+ people safe wherever they live.”

As for the NWAC’s comments on the “toxic” process, in a statement, the office said it is “greatly appreciative” of and values the association’s work input to date. “We are hopeful we can continue to work together as we put in place the concrete measures to stop this national tragedy and help families and survivors as they seek healing and justice.”

The federal government isn’t taking enough lead or responsibility with the action plan, said Ms. Groulx, who also said she worries the document is “shifting the responsibility” to the provinces or the Indigenous organizations themselves. 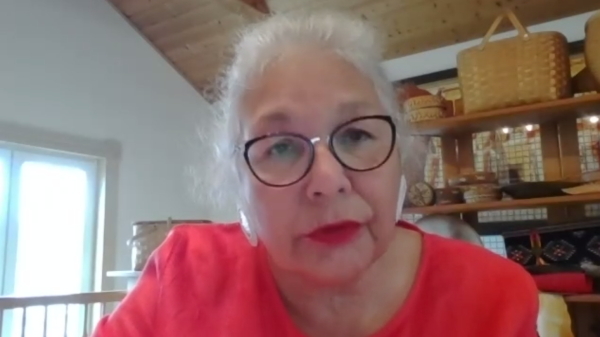 Lorraine Whitman, president of the Native Women’s Association of Canada, released its own action plan after pulling its name from the federal government’s plan, to be released on June 3. Photograph courtesy of Zoom screengrab

NWAC instead opted to release its own action plan on June 1, laying out 65 actions the organization plans to take, the estimated budget, and measurable landmarks tied to the action. In presenting that plan NWAC president Lorraine Whitman said women are “no safer now than we were two years ago, so we are taking matters into our own hands.”

The Hill Times reached out to several members of the core working group following NWAC’s announcement departure from the “dysfunctional” process on May 31, including the AFN, Les Femmes Michif Otipemisiwak (LFMO), Inuit Tapiriit Kanatam, the Ontario Federation of Indigenous Friendship Centres, and Ma Mawi Wi Chi Itata, but none responded by deadline.

Rebecca Kudloo, president of the Pauktuutit Inuit Women of Canada, said her experience working collaboratively on the Inuit chapter with ITK and other partners on the Inuit working group has been different. Since the fall, it has been meeting weekly to develop a plan focused on the 46 Inuit-specific calls for justice.

Rebecca Kudloo, president of the Pauktuutit Inuit Women of Canada, says it’s important the organization has a voice at the table. Photograph courtesy of Pauktuutit

“I know there were political snags here and there but I think the way we work with other organizations has been good,” she said, noting Pauktuutit is the national voice for Inuit women and NWAC doesn’t represent them.

Asked if there should be more “concrete action” in the expected plan, as its critics suggest, she said, “ideally we would have liked to have seen that, but we have voiced that we would want to be part of implementation.”

Ms. Kudloo said she’s raised concerns directly with the government, meeting as recently as last week with Ms. Bennett, whose involvement she said she’s been happy with. While it’s taken longer than expected, Ms. Kudloo recognized the pandemic had an impact on the delay and said it’s most important Pauktuutit is present and has a voice in the process, including for the eventual implementation plan.

What's the business case for the Kurri Kurri gas plant?

How Gravity Turns Me Upside Down

U.N. warns of worsening famine in Ethiopia’s Tigray By Reuters