Passéisme first established themselves releasing two songs from their latest Eminence LP back in 2019. A few dozens of copies of that demo came out on cassettes. Quite a punk-like, I suppose.

Ivan Markin, guitarist of Passéisme reflects on how the band was affected by the pandemic.

While two of the members were recording the second LP of their project – Wombripper, Markin has been “surviving the pandemic” – like many of us. And also, thinking about a good way to continue what they’d been doing since the formation of Passéisme. “We simply couldn’t not to re-record these two [songs from “Austerity Parade” demo] in a proper quality…”. The foundation for the record was set up, even though, the sound is still different. Maturing, Passéisme learnt to combine tension, atmosphere, and various sub-styles presented in their music.

Konstantiv Korolev, the bass player and vocalist of Passéisme has been a member of Wombripper, their first project. He left the band in 2018 but didn’t lose the connection with former bandmates. “The reason for my leaving Wombripper was my saturation of old-school death metal. Having a strong sympathy and appreciation of black metal as we had previously, it was clear to me whom to call.” – the turning point was the show, Wombripper has played in the autumn of 2019.

Korolev recalls: “I remember saying to them, after the gig: “I have the very first riff for a new band!” which turned out being the riff for Chant for Austerity. A black metal song with a very death-metallic aftertaste, in some ways it calls to mind the chaoticness of Bolt Thrower, combined with a certain progressivity that has become so important for Passéisme. Ivan puts all my references together describing the sound of Eminence as: “Covered with dust. But not to a point, where all the references become non-visible. It’s equal to an old, worn, but still functioning item…”

Experience of demoing their songs became crucial for Passéisme. Korolev states that among black-metal artists, quite often, the epithets “rough” and “live sounding” are quite natural to describe records with. 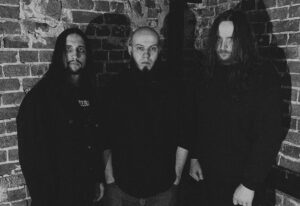 “We tried to keep the live sound of the instruments. Even though, at a point, it’s lost in the atmosphere.” – the bass player of Passéisme calls their debut Eminence “a more textured work” referring to the band’s developed ability to keep the expressivity of live-playing level.

There are, of course, some variations of this. Having set up the foundation for the upcoming project the band has been developing the record of the basis of the released demo.

“I try to write in a linear way” – says Markov and then explains: “The beginning of the composition is the main space for various experiments. It sets the tonalities for the future track…”

Of course, it’s not all about pressure. Closer to the end of the Eminence, Markov starts using an acoustic guitar. Colouring changes but the atmosphere and the pressure didn’t go away. When I ask about the reasons for such choice of instruments, he replies saying: “From the beginning, it seemed to us that acoustic sound would work organically within the structure of the record, taking into account its general moodiness.”

Either melodic like Chant for Tribulation or initially aggressive like Chant for Austerity and over-expressive Chant for Parade – Markov let them all lead him within the writing process. He says: “Which means that by the end of my work, I logically have all the parts so I could use different references, taking something from previously used riffs and melodies”.

Ivan had been writing the carcass of the songs. “Either riffs, or melodies or progressions…”. Then the arrangements come. Konstantin notices that arrangements that came next usually create the perception of the composition. Another crucial thing for Passéisme. Others are pressure, grooviness and moodiness, following the words of Konstantin “make the music work. As good as a high-speed train would work on a full-speed”.

Korolev is a translator. Quite good, so he could translate parts and pieces of Arthur Rimbaud’s poetry putting them together in the lyrics of the songs like Chant For Austerity and Chant For Parade. Konstantin refers to the decadence epoch, saying that: “We could see the fragility of these rebellious lines and structures of the early avant-garde era after they’d get translated not in a proper way.” – he continues: “If an individual understands the epoche of romanticism, he or she understands that initial black-ish spark that had existed during the very first years. Artistic detachment from the declining world.”

In the creativity of Passéisme, all the references play an important role. Korolev referrers to the visual presentation of the record, saying:

“The rethinking of memory-theme works there. It’s opposition to the term “history” being [usually] presented as an image of arrow or spiral.” – Korolev continues stressing: “That’s where the esthetic side works. Medieval entourage, French black-metal in English from Russian band, hardcore-type-of-vocals and death-metallic sounding”.

PwC's 'once in a generation' strategy change targets checks and balances

Katie Thurston Cries, Warns Bachelorette Suitors: Get Real or Get the F--k Out!