Pink has reflected on rising to fame alongside Britney Spears in the late 1990s, saying she wished she’d helped out her pop contemporary when she was struggling.

During an appearance on Watch What Happens Live, the three-time Grammy winner was asked about Framing Britney Spears, the controversial New York Times documentary about Britney’s personal life.

“I love Britney, and here’s the thing about all of us voyeurs — none of us know what’s going on,” Pink said. “We’re not there. And I would like to. I think we all would like to, and we feel this fierce protectiveness over her, for good reason — she’s a sweetheart. All I know is she’s incredibly sweet, and I want her to be happy.”

The singer told host Andy Cohen that watching the documentary made her wish she’d “reached out more” to Britney, who is engaged in a legal battle with her father over a court-ordered conservatorship that limits her authority over her own finances.

“I don’t like feeling helpless or powerless, and I can only imagine how she feels,” she said. “She could have used some support. The media tore her apart, and the paparazzi are scum. I wish I could’ve reached out and gave her a hug.” 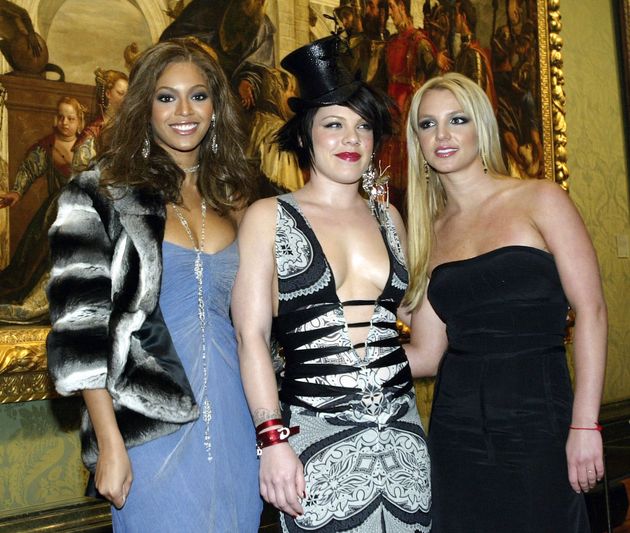 Pink (centre) with Beyoncé and Britney Spears in 2003.

Earlier this month, Spears blasted the scrutiny over her private life that Framing Britney Spears had ignited.

“These documentaries are so hypocritical,” she wrote on Instagram. “I don’t know y’all but I’m thrilled to remind you all that although I’ve had some pretty tough times in my life … I’ve had waaaayyyy more amazing times in my life and unfortunately my friends … I think the world is more interested in the negative.”

This week, Pink unveiled her own documentary, All I Know So Far. The film takes a behind-the-scenes look look at her Beautiful Trauma World Tour in the style of Madonna’s Truth or Dare and Beyoncé’s Homecoming.

Pink also opened up about turning down the chance to headline the Super Bowl halftime show in 2019. Maroon 5 accepted the gig instead, delivering a widelypanned performance with rappers Big Boi and Travis Scott as guests.

Pink didn’t single out Maroon 5 specifically, but hinted that the criticism the band and other artists have received after performing at halftime – as well as her support of the Black Lives Matter movement – factored into her decision.

“I would have a lot of fun doing it and it would be great, but I feel like nobody can win at that anymore,” she said. “It seems like anybody that does that halftime show, people just pick them apart.

“Also, I would probably take a knee, and people would be upset,” she added.

Watch Pink on Watch What Happens Live below…

How Many Deaths Is Boris Johnson Willing To Tolerate To Keep His July 19 Promise?

Surprise Stripping And Watermelon Crushing: Has This Morning Just Aired Its Strangest Show Ever?

I finally made it home to Australia. Thousands of others remain blocked by pandemic travel rules.

BMW reveals iX and i4 electric cars for Australia

In new letter, Democratic Rep. Cuellar urges Harris to travel to the border