Aspiring entrepreneurs know that an impressive office address can be a powerful asset.

Customers assume that if a business can afford to be based in an affluent area, it must be successful. But a Money Mail investigation today shows why you should think twice before trusting a grand-sounding location.

Number 207 Regent Street is a smart Portland stone building in central London, with five floors based above a shoe shop.

You might assume the rent would be eye-watering. Yet floor three could be yours for just £24 a month — as long as you don’t mind sharing with 3,900 other companies.

That’s because 207 Regent Street is what’s known as a virtual office.

It means that none of the firms’ staff are based at the address, and any post is just forwarded on to their ‘real’ location.

Virtual office: Number 207 Regent Street is a smart Portland stone building in central London, with five floors based above a shoe shop

They are paying to be able to use the address on business cards and websites.

As the firm that rents out the space, Hold Everything boasts on its website: ‘Having a virtual office on London’s Regent Street exudes the height of professionalism and ensures your business looks established and trustworthy’.

Companies purporting to be based at the address range from retailers to private investigators. U.S. businesswoman, Jennifer Arcuri, who claims to have had a four-year affair with Prime Minister Boris Johnson, uses the address for her firm, Hacker House Ltd.

But while most businesses have a justifiable reason for wanting a virtual office address, some unscrupulous owners are exploiting the system.

And City watchdog, the Financial Conduct Authority, has issued about half a dozen warnings about unauthorised firms claiming to be registered at 207 Regent Street.

These include the now-dissolved Coombes and Kiwonski Investments and a loan firm, Sky Quid, which conned victims out of about £20,000 by convincing them to pay deposits for loans that never materialised. 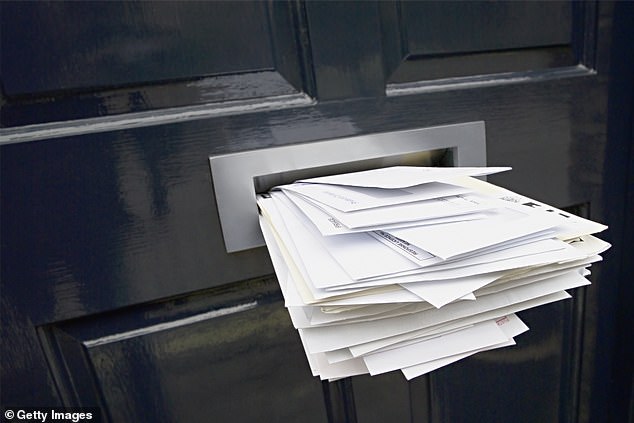 Forwarding service: None of the firms’ staff are based at 207 Regent Street, and any post is just forwarded on to their ‘real’ location

It’s around 11am on a Thursday when we arrive at the Regent Street office. A postman is heaving two bags of mail towards the entrance and opens the door for us.

Far from glamorous, inside there are piles of boxes and parcels filling up much of the cramped space. There is also a small boardroom clients can reserve for meetings.

Hold Everything’s owner, Richard Cooper, 52, is taking phone calls in the office. Wearing jeans and a fleece, he is a little defensive at first and insists his business is not doing anything wrong. And he is right. It is perfectly legal to rent out a virtual office space.

The problem is unscrupulous firms often target addresses where a lot of companies are registered as it can be easier to go undetected. 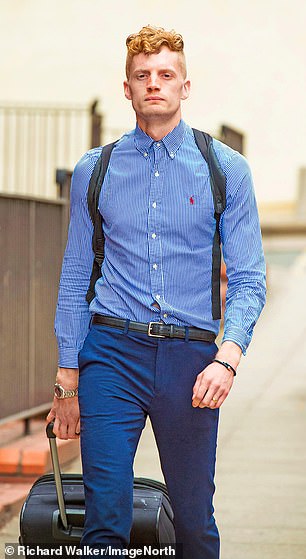 Richard Howard arrives for sentencing at Leeds Crown Court after being convicted of a £1.6 million passport scam

Usually, these business owners don’t even bother paying Mr Cooper the monthly fee. They just list his company’s address on their websites without his knowledge.

In fact, when Money Mail presented Mr Cooper with a list of six firms the FCA has issued warnings about, he said he did not recognise any of them — although they claimed to be registered at his Regent Street address.

Coombes and Kiwonski was even listed at Companies House as being registered at No 207.

Yet Mr Cooper says he has no record of the firm ever being a client. ‘I feel disgusted when I think that fraudsters have used the address to dupe victims,’ he says.

Experts say it is far too easy for crooks to register misleading information at Companies House, which holds a list of all limited businesses in the UK.

This is because Companies House is not authorised to check the accuracy of documents submitted, and is required only to ensure they have been completed and signed.

Fraud campaigner Mark Taber says: ‘If a customer searches for the address on Google maps and sees a legitimate office and other genuine firms registered there, it seems more credible.

‘If Companies House had to check addresses it would close another loophole.’

Many customers do not realise the address is a virtual office.

Mr Cooper, who has run the firm for 19 years, says people have turned up to complain. ‘One man stormed into the room shouting. I had to take him to the boardroom to calm down,’ he says.

Virtual offices are regulated by HMRC under money-laundering rules, which means they are required to verify the identities of customers and their addresses.

Mr Cooper says he always alerts the authorities to companies he is concerned about.

Details he provided about one client, Richard Howard, in 2018 were used to help convict him of a £1.6 million passport scam.

The crook had duped victims into paying fees of up to £117 to renew their passport, and was fined £200,000 and given a one-year suspended prison sentence after pleading guilty.

Mr Cooper’s Regent Street virtual office is just one of many up for grabs. Another address in Finchley, North London, is the first floor of a two-storey office block on a quiet residential road.

Some 4,475 companies are registered there, and Money Mail identified three about which the FCA has issued warnings, including an unscrupulous loan business. The firm which runs the virtual office, A1 Company Services, did not respond to our requests for comment.

A Companies House spokesman says: ‘We recognise the concerns around the use of people’s data for fraudulent purposes and refer cases to law enforcement partners where it is suspected.’

New rules will soon require it to verify directors’ identities before they can be appointed.

Some links in this article may be affiliate links. If you click on them we may earn a small commission. That helps us fund This Is Money, and keep it free to use. We do not write articles to promote products. We do not allow any commercial relationship to affect our editorial independence.

U18 Worlds Preview: Canada vs. Sweden

It’s Official: These Are 24 the Best Yoga Pants on Amazon