Punks in Peoria: Making a Scene in the American Heartland

By Jonathan Wright and Dawson Barrett

Local punks rejoice! Punk rock has been brewing in small towns for decades—you just have to know where to look. Punks in Peoria is just the text map you need.

This book is a true celebration of the local—the so-called flyover and pass-through towns where nobody tends to stop. Indeed, as Wright and Barrett underscore, Peoria is a place where a number of notable punk bands from the 1970s to the present almost played. But don’t assume for a second that Peoria isn’t important — and perhaps even essential — to charting a history of punk in America: “The story of the Peoria music scene affirms the central premise of DIY punk rock: that music is for everyone, and that anyone can (and should) create meaningful art.” Wright and Barrett intimate that Peoria is a quintessential lesson in how “the music industry—the major record labels, the corporate media, the Grammys—can create and reward pop stars, but commercial success is often unrelated to talent, originality, or passion.” To be sure, the authors leave their readers wondering what other small towns have been overlooked in charting the punk scene and other sonic innovations simply because of chance, economics, or geographic proximity to an urban center. 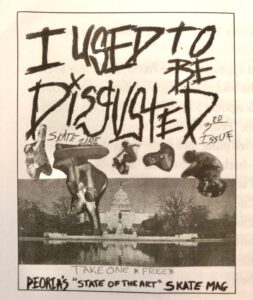 As musician Kate Dusenbery explains in the book, “the main thing that Peoria instilled in me is the ability to make something from nothing . . . . To see potential where there is very little, to understand that if you love something, if you want to create and make something happen, if you can get just a few people to believe it and help you do it, you can make it happen.” Dusenbery is one of many artists profiled in Punks in Peoria, part of a scene that included “an intersection of like-minded peers from different schools and different racial and socioeconomic backgrounds — and one in which women were a driving force.” In the late 1980s, Dusenbery and others formed the Disgusted Youth Organization (DYO), which arranged an (in)famous gig in downtown Peoria and created I Used to Be Disgusted, a zine “defined by their aggressive straight-edge and anti-racist views.” Of course, DYO wouldn’t have been possible, Wright and Barrett suggest, without the earlier work of brothers Steve, Chopper, and Barry Stepe — musicians who were instrumental in developing a punk scene in the midwestern town in the early 1980s. Other players at the center of the decades-long story of Punks in Peoria include Jon Ginoli of Pansy Division, Bloody F. Mess, Suit and Tie Guy James Eric Williamson, and the members of Dollface, Nora Hate, and Planes Mistaken for Stars.

Oh, and the venues! In the best kind of punk fashion, most of Peoria’s early spots for shows were makeshift ones, rented out for the night. As the authors explain, “Peoria was never able to sustain a proper punk venue,” so “its underground music scene learned to be DIY in a very active and unorthodox way.” In both its past and present, arranging a gig in Peoria has required “constantly hunting for venues [that could be] repurposed for an evening—a revolving hodgepodge of banquet halls, houses, church basement, and after-hours businesses.”

Even in the mid-1960s, gigs occurred mostly in “Peoria-area garages,” while subsequent bands played at spots like the Juice Bar, VFW Hall, American Legion Hall, Expo Gardens, the Owens Recreation Center, and East Peoria’s ICC gym. Later on, clubs like Confetti’s and Stage 2 became prominent — albeit short-lived — spaces for punk to flouresce. While it was only open for about a year, Airwaves Skate Park enjoyed a temporary “reign” as “Peoria’s punk rock mecca” from 1992-1993.

A subsequent venue, Tiamat, “existed solely for the purpose of music,” Wright and Barrett explain, identifying the spot as “the Peoria equivalent of New York City’s CBGB or Berkeley, California’s 924 Gilman Street, ragged but legendary punk venues that encapsulated the grimy essence of their time and place.” Indeed, in seemingly classic Peoria fashion, Tiamat closed after a Jimmy John’s franchise bought up its real estate to create a parking lot. Yes, reader, one of Peoria’s favorite punk venues became a place for sandwich buyers to park their cars. Yet as the authors suggest, “the spirit of Tiamat still lives on Peoria’s West Main Street — even if Jimmy John’s was the business left standing.” If it makes you feel just a bit better, a Peoria band from the time, the Fucked Ups, “ended Tiamat’s punk rock reign in style: with fake blood splattered everywhere and friends and comrades beating percussive rhythms on overturned metal trash cans . . . one last exciting mess.” And when it comes to documenting local spots, I’d be remiss if I didn’t mention Peoria’s Co-Op Tapes & Records role in the burgeoning scene. Although its life was brief, the music shop is a prominent character in this book, ultimately depicted as a catalyst for the midwestern town’s punk narrative.

In case you couldn’t tell by now, Punks in Peoria relies on a variety of source material, including substantive interviews with members of the Peoria music scene, archival newspaper articles, flyers and handbills, locally made zines, and more. It’s in part a work of oral history and a material mine. Yet the text is also, by and large, an act of recovery as it brings local knowledge of Peoria’s punk scene to the surface and center. Ultimately, Wright and Barrett make a strong case for learning about Peoria and all the other small-town scenes that may have been subsumed to the punk stories of New York, Los Angeles, Seattle, London, Manchester, Berlin, and other major world cities. Without understanding the local, they hint, you’ll never have a full picture of the global.

Punks in Peoria is among the best examples I’ve encountered of a book using scholarly methodologies that’s hugely accessible to any interested reader. Indeed, this text should be seen as a gold standard for academic writers who want to reach the public, with the University of Illinois Press as a key partner in this important work. One of the greatest aspects of Punks in Peoria is that it acts as a call to action for any readers with their own knowledge of local punk histories, suggesting that this kind of writing need not be tethered to academic inquiry. Like the writers say of their book, “in the DIY tradition, if it doesn’t reflect your history, we encourage you to write it!”

If I could make just one change to the book, I’d add a playlist for a multi-volume mixtape. For now, I’ll need to track down some of these bands myself, but I’m looking forward to doing it.

Words by Audrey J. Golden. You can follow Audrey on Twitter and Instagram, and you can check out her personal website to learn more about her writing and her archive of books, records, and ephemera.

Coronavirus: Returning to the workplace? Your office might look a little bit different

Don Martin: Teflon Trudeau dodges trouble with a gift from the Greens

We Tested The Ninja Foodi Grill. Here’s Our Review