A retired Albuquerque cop and his wife were among the five victims who died Saturday morning when a hot air balloon flew into a power line and crashed in New Mexico.

Martin Martinez, 59, a retired Albuquerque police officer and sergeant in the Albuquerque Public Schools Police Department, and his wife Mary, 62, were identified during an afternoon press conference.

Their son is a current prison transport officer in the department.

The other three victims’ names won’t be released until their families are notified. They’re described as middle-aged and New Mexico residents.

Albuquerque Police Chief Harold Medina said he worked with Martin Martinez when he first entered the department, which made the tragedy even more traumatic for him and the other officers who responded.

‘In 26 years, it was one of the scenes that hit me the most,’ Medina said. ‘There were officers on the scene who worked with Martin and we did have to send some officers home because they were disturbed by what had occurred and it took its toll on them.’

The Albuquerque Public Schools issued a statement giving condolences to the Martinez family.

The balloon came down on a street corner in the West Side neighborhood of Albuquerque around 7am Saturday, about six miles from Albuquerque International Sunport Airport.

The hot air balloon basket, shown here, separated from the colorful envelope and crashed on a busy intersection in Albuquerque 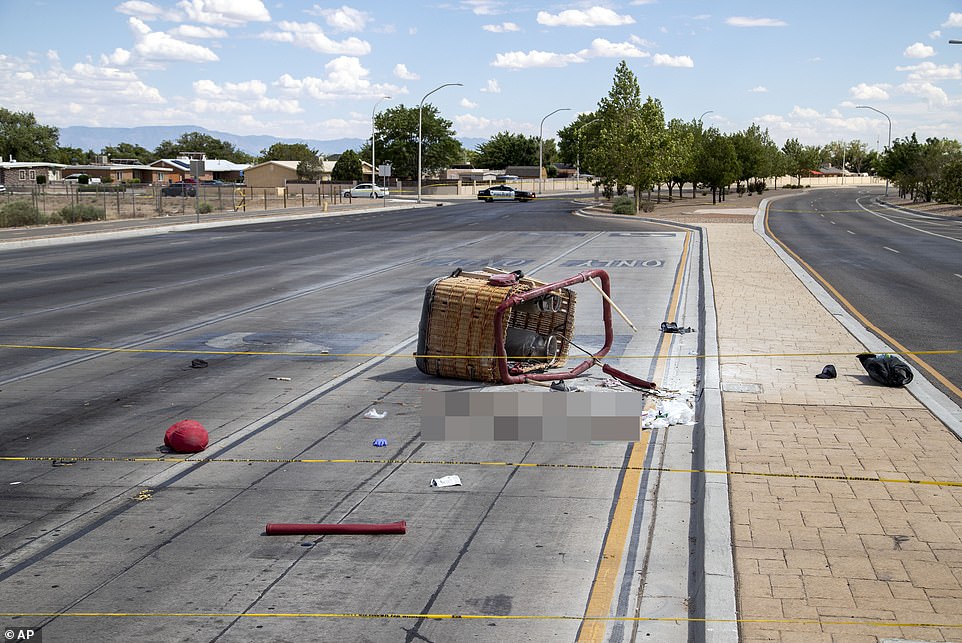 The basket lies on the street in the West Side neighborhood of Albuquerque, about six miles from Albuquerque International Sunport Airport, while the investigation continues 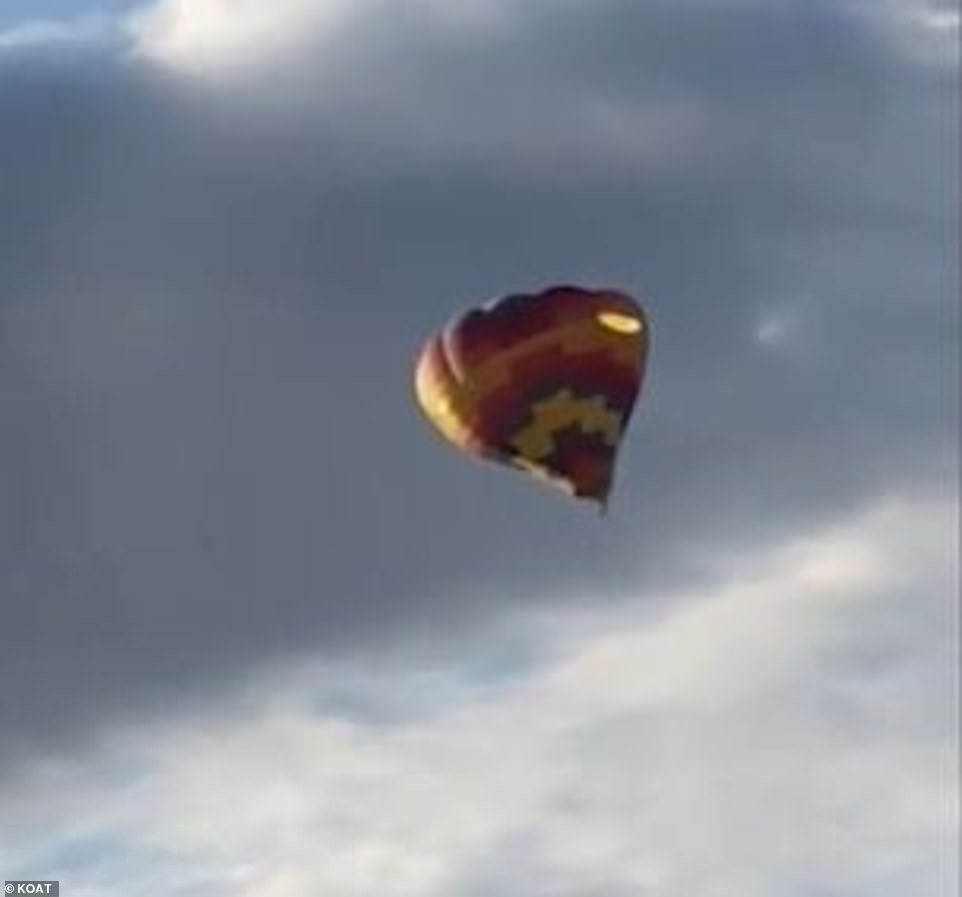 Five people have been killed in a hot air balloon crash in New Mexico after it flew into power lines, according to authorities

The balloon is thought to have been blown by the wind into power lines, causing it to catch fire and the basket separated from the colorful envelope.

The basket then plummeted to the ground in flames, landing in a busy street close to a local CVS pharmacy.

The envelope – the colorful balloon part – was later found in the backyard of a home about a mile away.

Medina said several nearby citizens ran to the basket with fire extinguishers and tried to help the victims. Unfortunately, four of the victims were pronounced dead at the scene. One of the victims was rushed to the hospital but died shortly thereafter.

‘We want to thank all the individuals who helped out today. There were greats acts of heroics done by citizens,’ Medina said. 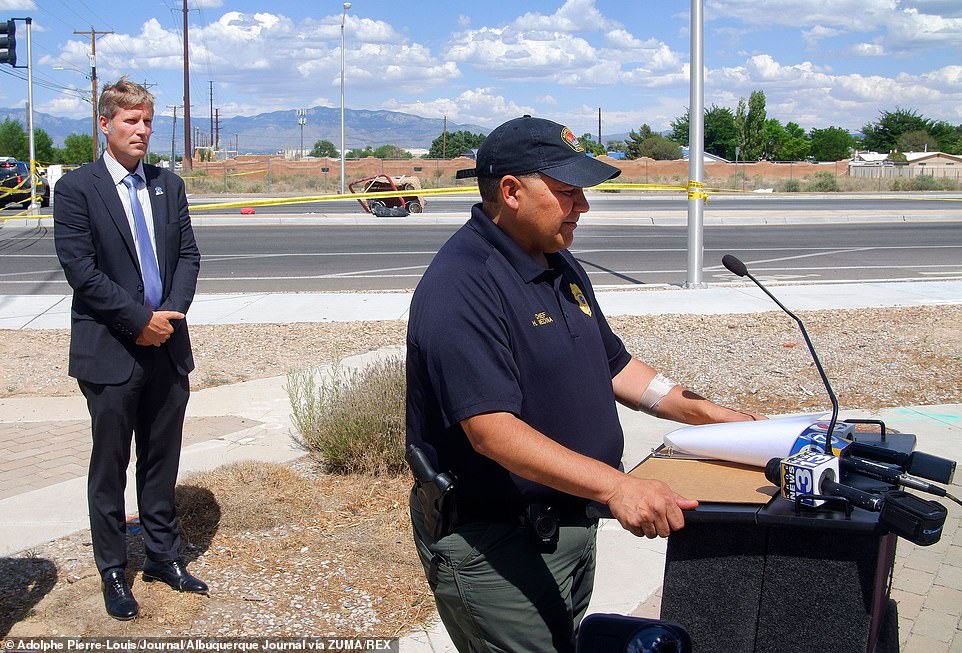 Albuquerque Police Chief Harold Medina, at the podium, said during a Saturday afternoon press conference, ‘In 26 years, it was one of the scenes that hit me the most.’ Behind him is the city’s mayor Tim Keller 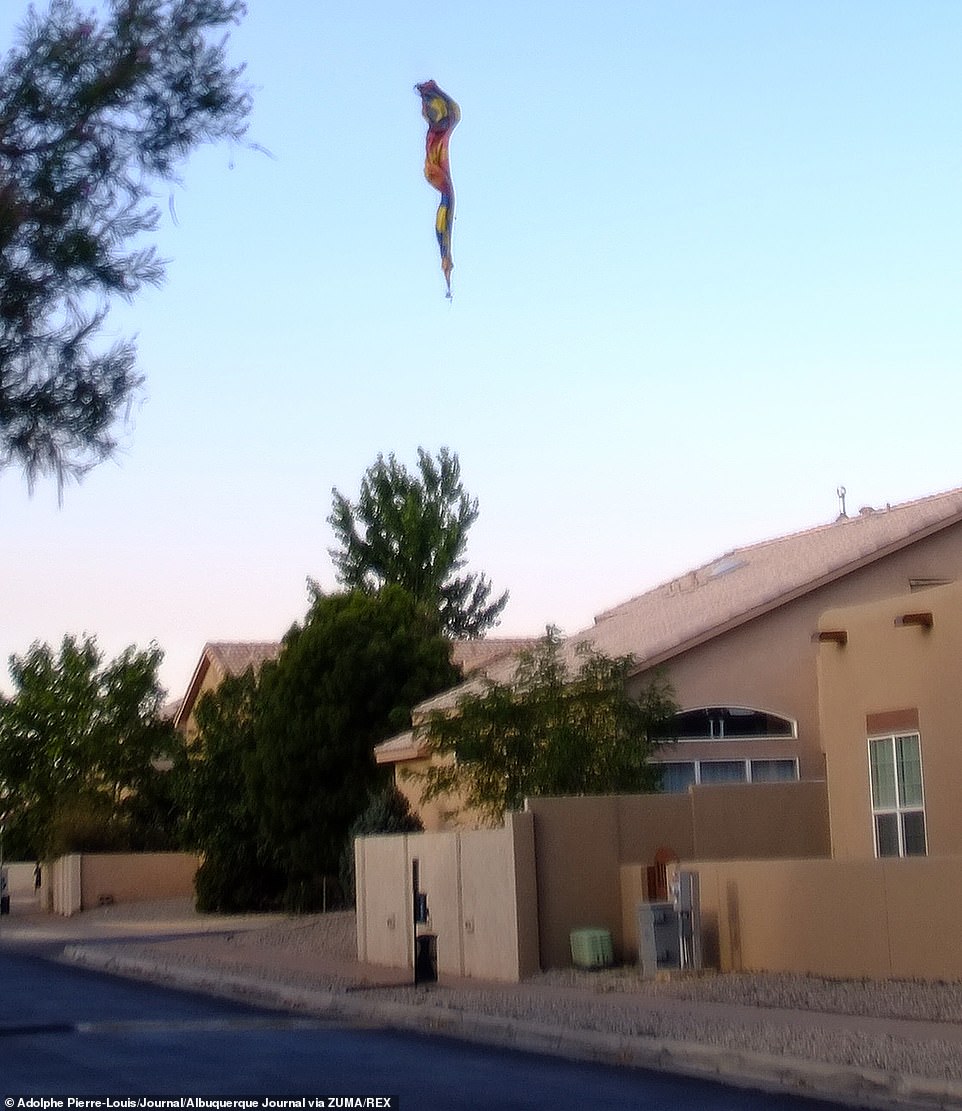 The balloon is thought to have been blown by the wind into power lines, causing it to catch fire and the basket to separate from the balloon. The balloon is seen landing near a home 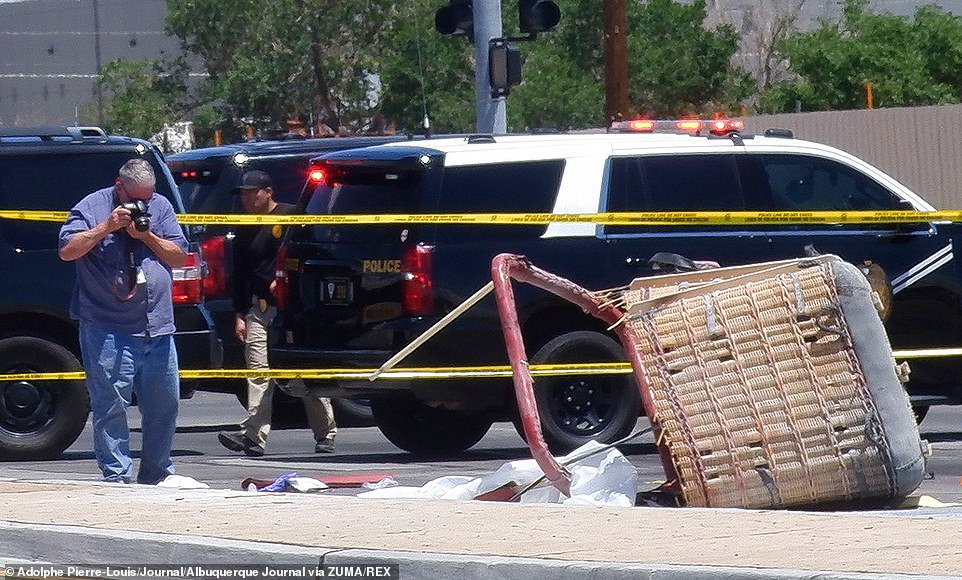 The basket plummeted to the ground in flames, landing in a busy street close to a pharmacy 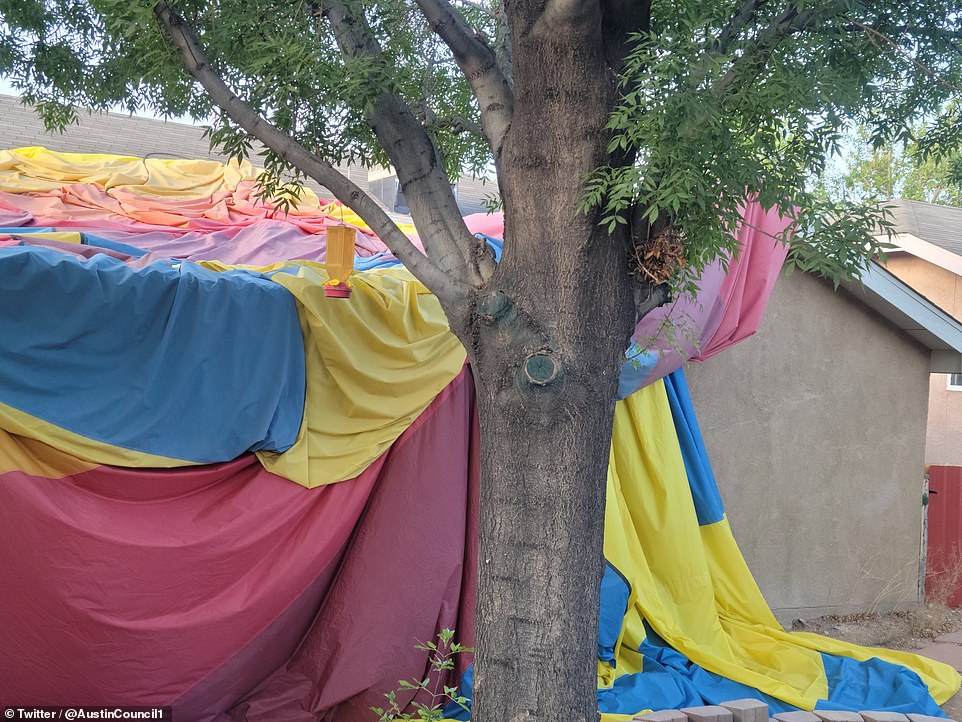 Albuquerque Police spokesman Gilbert Gallegos said at a press conference that the multi-colored balloon skirted the top of the power lines at around 7am.

Witnesses told KOAT the basket was on fire when it crashed into the street with several bystanders rushing to try to put the fire out.

Another witness told KOB4 he was in a gym nearby when he heard a loud bang that ‘sounded like gunshots’.

Joshua Perez rushed out and saw the balloon part flying off detached, before noticing the basket lying in the street.

He said people turned off the propane on the balloon and ran over with fire extinguishers to help save the victims.

‘We turned off the propane off the balloon so it didn’t blow up on them.’

Police said the four people were already dead when they arrived on the scene. 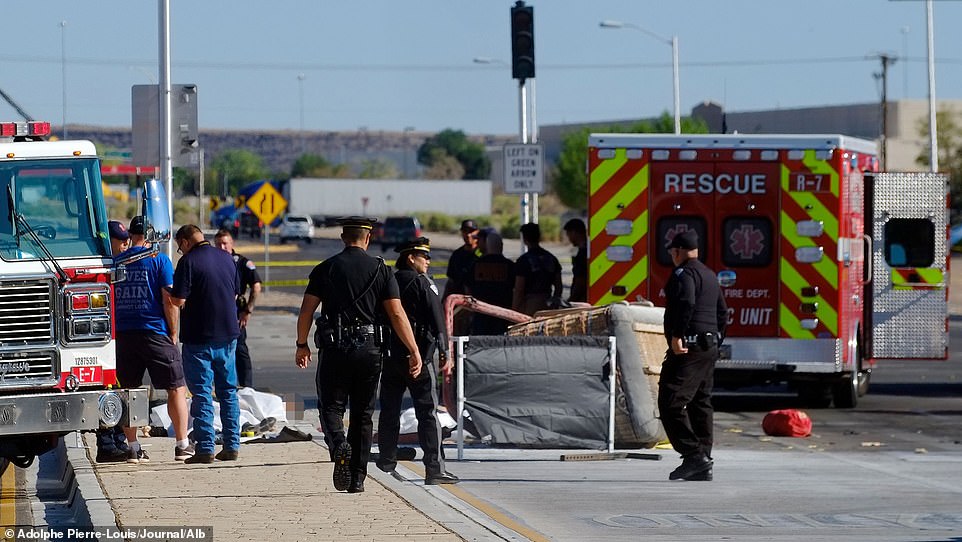 Gallegos said: ‘It’s just a very tragic situation. Our officers who arrived first on scene had a tough time when they saw what they saw. These things are just horrible anytime they happen.’

Gallegos said it was not clear what had caused the balloon to strike the power line but ‘sometimes winds kick up or things happen that make it difficult for balloons to navigate.’

‘Our balloonists tend to be very much experts at navigating, but sometimes we have these types of tragic accidents,’ he said.

The collision also left one of the lines dangling down and cut off power to more than 13,000 homes in the area.

Public Service Company of New Mexico (PNM) crews were seen working to fix the downed line and restore power as soon as possible.

Albuquerque Police, the FAA and the National Transportation Safety Board are investigating the incident. 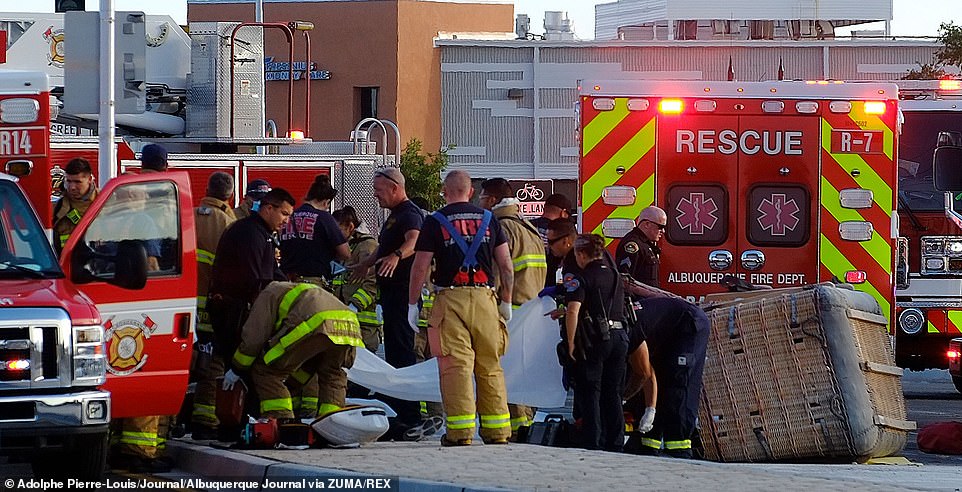 The aircraft came down on a street corner in the West Side neighborhood of Albuquerque around 7am Saturday, about six miles from Albuquerque International Sunport Airport 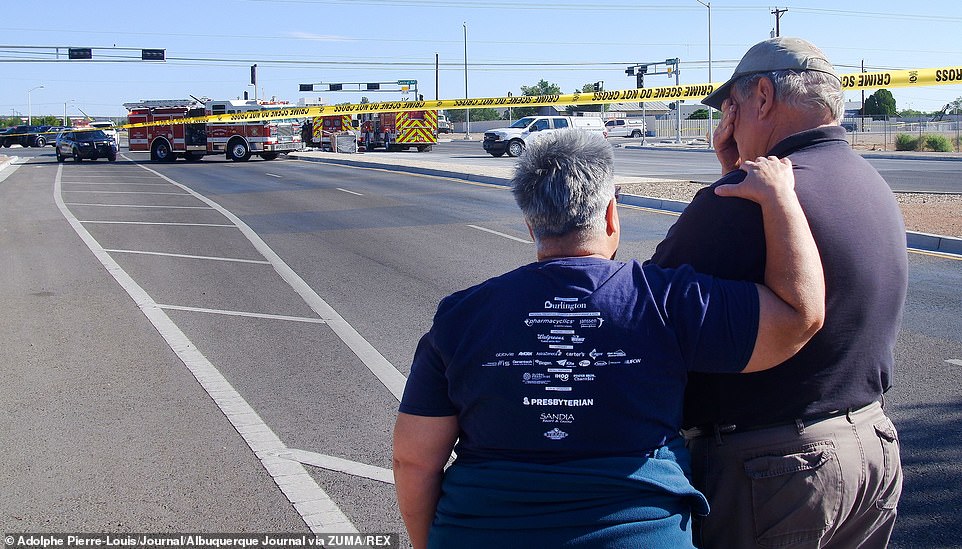 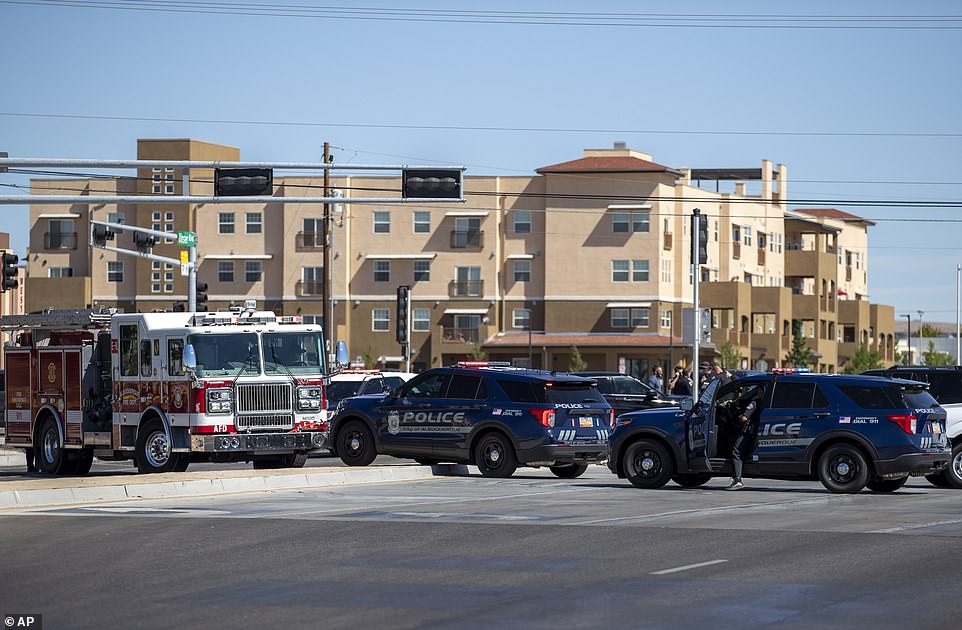 Albuquerque Police, the FAA and the National Transportation Safety Board are investigating the incident 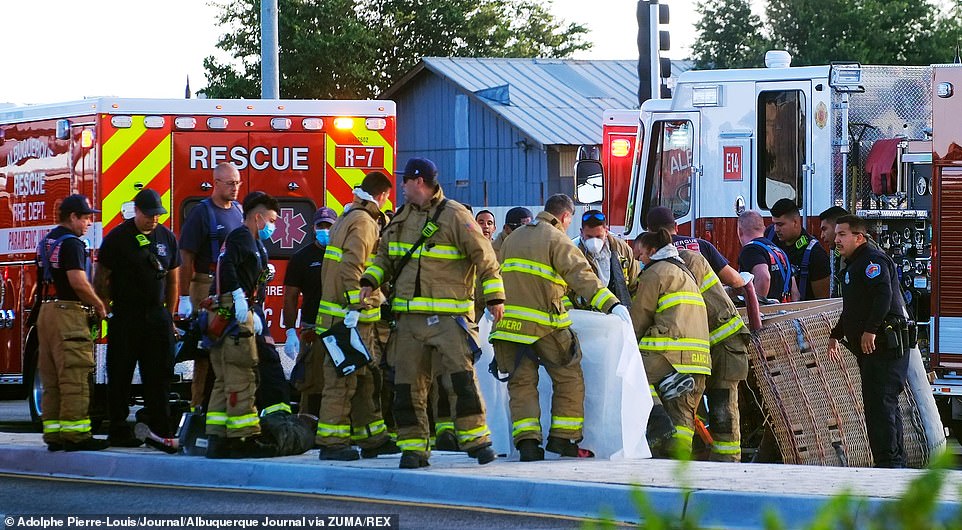 The deadly crash comes just months after another fatal balloon incident just outside the city of Albuquerque.

In January, a passenger in a hot air balloon was ejected from the basket after a hard landing.

He was taken to hospital but later died from his injuries.

In 2016 in neighboring Texas, 16 died when a hot air balloon hit high-tension power lines before crashing into a pasture, killing all on board.

Federal authorities said at the time it was the worst such disaster in US history.

Albuquerque is a popular destination for hot air balloon rides, with colorful balloons regularly spotted above the skies.

Every October, the city hosts a nine-day event that draws hundreds of thousands of spectators and pilots from around the world. 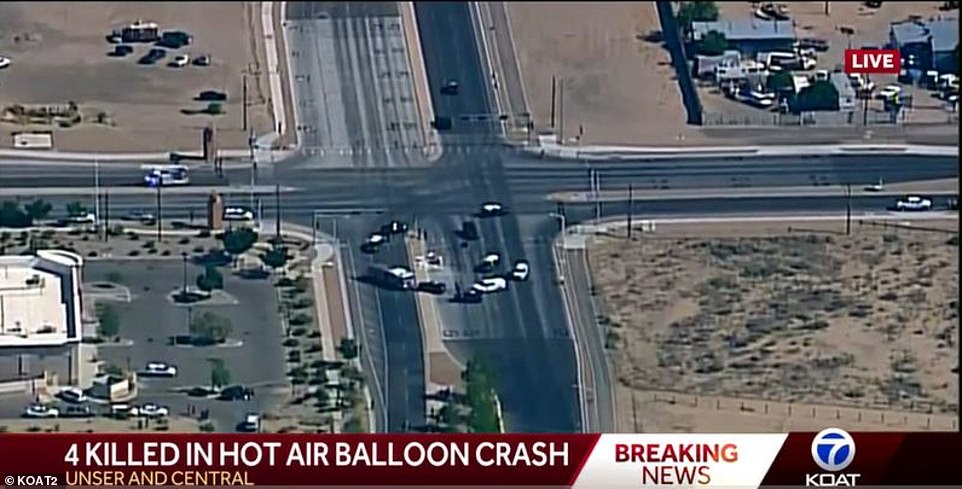 Five people were flying in the craft at the time. Two men and two women including the male pilot were killed while a fifth victim is in a critical condition in hospital 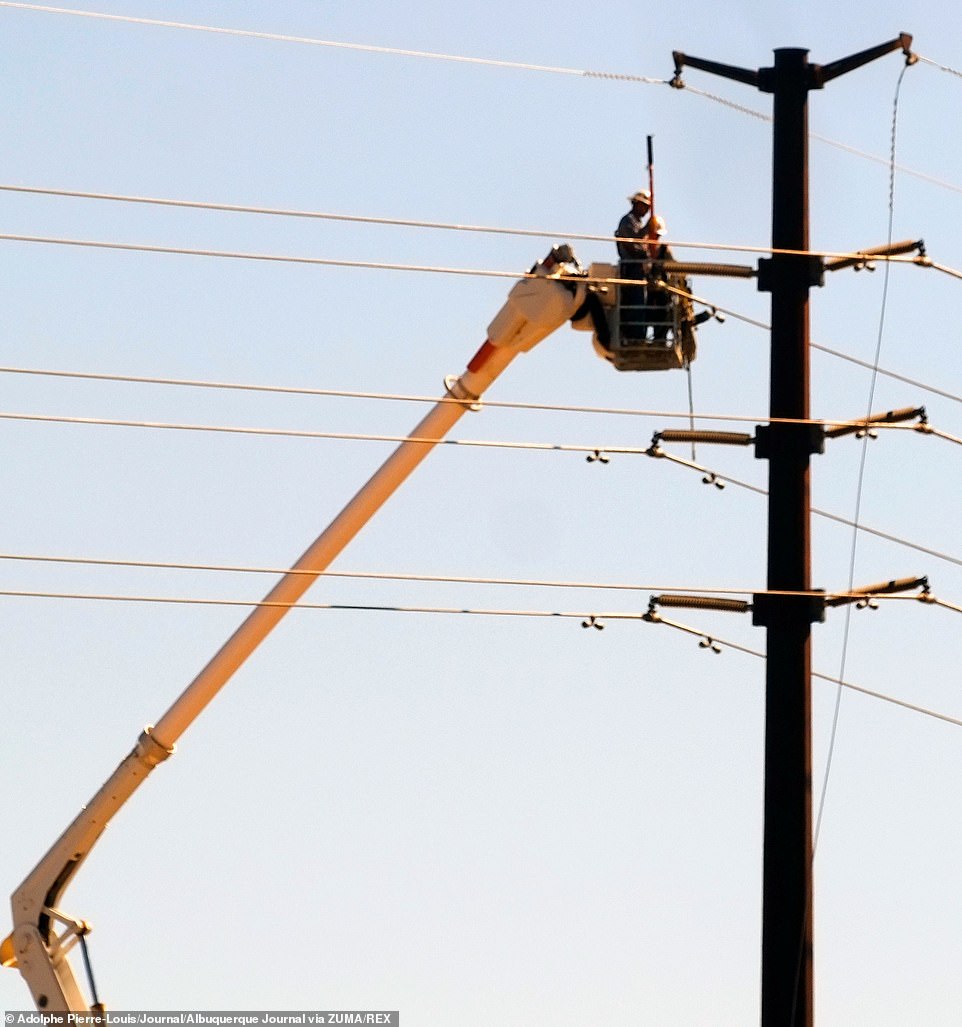 By chance, Florida building resident stayed at girlfriend's on night of disaster By Reuters

Fact or Fiction: ‘Horns Down’ should be a personal foul