Sebastian Plano: Save Me Not

Sebastian Plano’s latest album, Save Me Not, is a beautifully tantalising masterpiece. Seeming to flit between parallel dimensions, it is utterly captivating from start to finish. Louder Than War’s Gordon Rutherford reviews.

There is a statement on the cover of Stevie Wonder’s masterpiece, Music Of My Mind, that proclaims, “The man is his own instrument/ The instrument is an orchestra.” Those words immediately came to mind the first time I heard Sebastian Plano’s latest album, Save Me Not. One man working in solitude. A one-man orchestra. That’s the way that Plano, the outstanding Argentinian cellist, composer and producer, likes it. All he needs is his cello, his grand piano, his voice and his imagination, and by utilising these to the full, he has been able to create something quite stunning.

Plano recorded Save Me Not in his Berlin studio in the bleak midwinter, working in the wee small hours, when the mercury plummets and the city sleeps. Within, he grafts alone, experimenting and innovating, knitting together the ideas that flow through his head. The downside, I guess, is the few opportunities for water-cooler chats, but such a methodology does bring an incredible sense of freedom and the space to innovate.

Save Me Not sounds precisely as you might envision it from that description. It’s spectral and lingering and incredibly moving. It’s a body of work that seems to straddle two dimensions and the space in between them, almost as though there is a rip in the fabric of time and the music is seeping back and forth. This acuity is evident even before the needle drops on to the vinyl. On the album cover, a portrait of the artist is brutally dissected by a slash that runs from top to bottom of the image. On one side, it is unblemished truth, whilst the other is a distorted, warped version of reality. 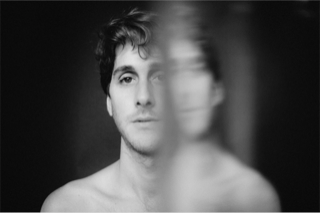 Our traversal begins amidst the distorted and otherworldly realm in the form of the opening track, Agos. It centres around an ethereal choir of voices that are chaperoned directly through from the other realm by Plano. This is followed by the title track, Save Me Not, which dwells in that same space. Plano’s haunting and distorted voice enfolds you. There is a magical moment almost three minutes in where the music just stops, then restarts a second later. However, it’s slightly different on its return. It’s like when James Murphy proclaims that love is like an astronaut on LCD Soundsystem’s Drunk Girls – they come back but they’re never the same. Something has occurred. In that split second, the music has gone somewhere and come back somehow changed.

Those opening eight minutes of Save Me Not (the album) may surprise those familiar with Plano’s back catalogue. Take 2019’s Grammy-nominated Verve, for example, which was awash with lush strings and undulating piano. Two tracks into this follow-up, it is evident that he has moved on. There is a quite different feel at play here, with the new material coming across as more complex, more innovative. It’s not that he has suddenly adopted banks of electronics to achieve this. Far from it – there are no electronic instruments on Save Me Not (although the sounds created were ultimately processed electronically).

With extraordinary levels of ingenuity, Plano actually managed to improvise by striking the body of his cello or by stamping his feet. He even utilised the squeak of his studio chair. We return to more familiar terrain on the following two tracks, the first of which is the exquisitely composed, rippling piano and lush strings of A Present For A Young Traveller. Plano’s mournful cello then introduces the glacial majesty of Obsequence, a composition which is like a fragile and precious artefact, clearly crafted by an artisan.

Sometimes you are in neither dimension on Save Me Not. Take the album’s centrepiece, a three-part suite (along with a prelude) entitled Soul, for example. This is a section of the album that seems to straddle the two dimensions, as though it is stuck in the void between them for eternity. Soul I (Avow) is like a requiem, lamenting its eternal fate to be trapped between worlds. Can any instrument ooze sadness quite like the cello, particularly when it is in the hands of such a virtuoso? It is unquestionably the album’s highlight, a piece of music as melancholic as a freighter full of sorrow. And yet, like Visconti’s Death In Venice and di Lampedusa’s Il Gattopardo, it combines the tragic with an elegiac beauty.

The mood shifts marginally with Soul II (Elan), which is built upon a hypnotically looping piano line, whilst the influence of former collaborator Nils Frahm hovers on the rhythmic Soul III (Ylem). The latter is yet another example of Plano’s ability to innovate, as layer upon layer of pizzicato cello weave patterns all around you. The track escalates and swells and discordant sweeps of bow on cello guide you back to that warped dimension again. Never Learned is quite simply the sound of a heart breaking, as Plano’s cello and piano intertwine exquisitely, whilst the album closer, Liv, is a minimalist bookend to opener, Agos.

Save Me Not is an incredible achievement, one that should surely result in considerable acclaim for Sebastian Plano: ten beautifully ethereal compositions, masterfully created and expertly performed. As we walk through these tracks, we get a sense that a host of different forces are at work, pulling the artist hither and thither. And yet, at no point is there conflict. No matter which dimension we are in, collectively it all dovetails seamlessly. I guess that’s the thing about parallel dimensions.

All words by Gordon Rutherford. More writing by Gordon can be found in his archive.