By Raven Saunt For Mailonline

A fed-up headteacher has banned skirts from his school because he said he is sick of girls wearing them too short.

Lee Jarvis sent a message to all parents at St Martin’s School in Caerphilly, South Wales, over concerns that skirts were ‘far too revealing’.

He has now outlawed all skirts because of their ‘inappropriate’ length – and introduced new rules to say youngsters must wear tailored trousers or shorts.

Furious parents have blasted the new skirt ban as ‘unfair’ after buying uniforms for pupils – and say the entire 980-strong student body should not be penalised.

But St Martin’s is not the first school to ban skirts with a series of others across the UK having also introduced the rule in recent years.

Mr Jarvis’s email said: ‘Over the last couple of years our school community has had concerns over the length of some learners’ skirts.

‘Staff and learners are included in this and members of the public have frequently contacted the school to complain about what they regard as highly inappropriate and far too revealing attire for the workplace.

‘We have therefore concluded that this item of clothing needs to be removed from our uniform policy from September and replaced by tailored shorts for hot weather or alternatively trousers.

‘I felt it was prudent to write to let you know this in plenty of time before we all begin to consider purchasing new uniform for September. ‘ 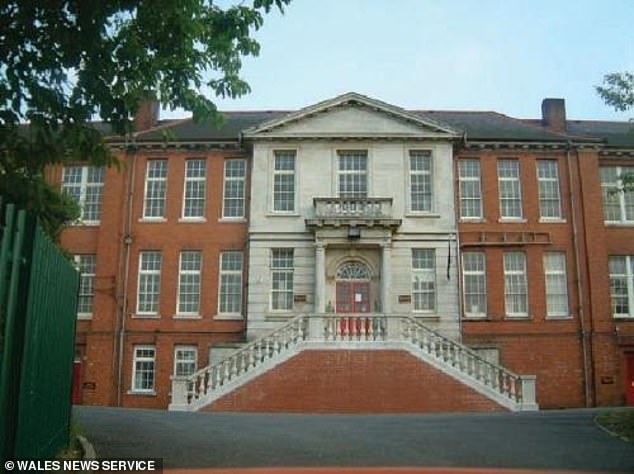 He sent the message to all parents at St Martin’s School (pictured) in Caerphilly, South Wales, over concerns that skirts were ‘far too revealing’

But angry parents hit out at the new rules and said they now must fork out more money on uniforms.

One mother said: ‘My daughter is not happy and doesn’t want to wear tailored school trousers.

‘I think it’s unfair. Don’t they have other things to worry about after we’ve all come through Covid?’

Another added: ‘I disagree with this. It should be addressed per child and not penalise the whole school.’

St Martin’s is not the first school to ban pupils wearing skirts.

Priory School in Lewes, East Sussex, scrapped its female uniform and made all new pupils wear trousers, shirts, jumpers and ties in 2017.

Teachers said the new attire is being imposed to stop girls dressing provocatively and to help the ‘small but increasing number’ of transgender pupils.

Similarly, eleven-year-old pupils – both boys and girls – at Stowmarket High School, Suffolk, were told in 2019 they would have to wear trousers, a blazer and clip-on tie.

The school initially said the new policy has been partially put in place because of the new building design.

Opinion | What the Covid Rookies Saw

Do crypto ATMs make buying BTC easier for the mainstream?

Dina Asher-Smith breaks down in tears as the British sprinting star PULLS OUT of the 200m...

If you’re watching the Olympics from the US, here are the key events to catch today