The Go-Go’s Beauty and the Beat: A 40th Anniversary Celebration


The Go-Go’s debut album Beauty and the Beat was released on July 8, 1981. Its 40th anniversary is a momentous occasion marked by the band’s induction into the Rock & Roll Hall of Fame, bringing the Go-Go’s full circle.

The band should have been inducted into the Rock & Roll Hall of Fame sooner—they’ve been eligible since 2006—but I’ll take any opportunity to celebrate the Go-Go’s and their music while also pointing out the misogynist hurdles to being recognised within the world of rock music. The pervasive sexism in the music industry isn’t so different than it was in 1981 when the Go-Go’s released their first record, yet the band prevailed powerfully and illustriously. Indeed, Beauty and the Beat made the Go-Go’s the first all-woman group to reach No. 1 on the US charts. The album sold more than two million copies, went double platinum, and continues to be hailed as one of the most commercially successful debuts of all time. The music was popular then, and it’s still popular now. On the one hand, the record is tied to the new-wave sounds of the past, but on the other hand, it’s a collection of lasting tracks that transcend the decade in which they were recorded.

Although the Go-Go’s accolades feel almost predestined in the 21st century, the band members still look back with wonder on the success of Beauty and the Beat. Lead vocalist Belinda Carlisle recalls, “I remember thinking, if we sell 100,000 copies, that would be amazing. We had no idea it would do what it did. I look back even now and say wow. We went from zero to one hundred in about two years. And what happened with the album—its success—was beyond any of our expectations.” Go-Go’s bassist Kathy Valentine looks back similarly. “It was like having your wildest dreams come true,” she tells me, “recording a record with your best friends at only twenty-two years old.” 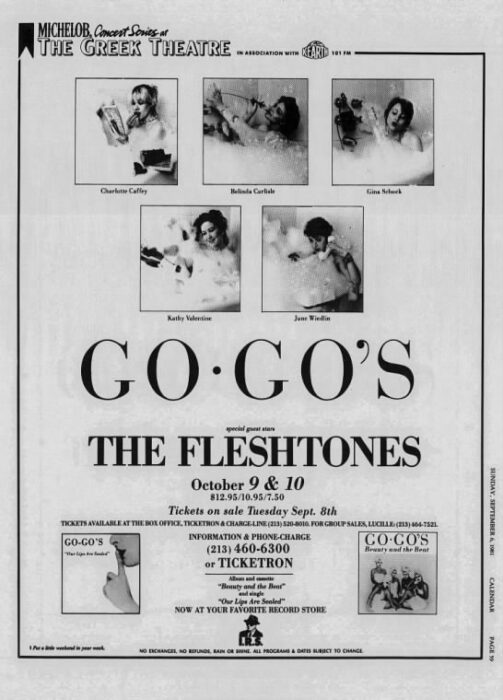 Kathy attributes the continued success of Beauty and the Beat to the timeless production work of Richard Gottehrer, who formed Sire Records with Seymour Stein and produced records by Blondie, Richard Hell and the Voidoids, the Fleshtones, the Bongos, and many more. The enduring sound of the songs reflects the eminent agelessness of the album’s cover. Faded images of the band members, in spa-style towels and face masks, suggests that the record is untethered from any markers of temporality. Belinda recalls, “I had the idea that it should be timeless—no clothing or makeup that dates it. We didn’t want anything to date the record.”

The figures behind I.R.S. Records, who signed the Go-Go’s in 1981, recognised the brilliance of the band and, in so doing, played a key role in music history. While other labels turned down the Go-Go’s under the discriminatory assumption that female musicians wouldn’t sell records, I.R.S. did things differently. At the time, the label was “viewed as an eccentric outfit that specialized in singles and EPs from hardened punk bands like the Cramps and Dead Kennedys, or obscure artistes like Wazmo Nariz and Skafish,” the Los Angeles Times reported upon the release of Beauty and the Beat. Before the label went defunct in 1996, its roster also included Buzzcocks, The Fall, The Bangles, Magazine, R.E.M., and The Damned. But back to 1981. For that same Los Angeles Times article, just a couple of weeks after the official release of the Go-Go’s debut record, I.R.S. co-founder Miles Copeland talked with the California newspaper about the band and their first album. “We are very very happy with the Go-Go’s, and we know they’re going to be a major group,” he said. “I’ve been watching the Go-Go’s since they put out their first single on Stiff, [and] I know the Go-Go’s . . . are the music of the future.”

Despite the Go-Go’s being an LA band, Beauty and the Beat was recorded in New York City. Kathy remembers the distinctive ways that NYC shaped the album. “I don’t know if it would have been the same record if we had done it in LA. There was something about the energy and exuberance of New York City then, and that sensibility became part of our record.” The East Coast location also looms large for Belinda when she thinks back. “Recording the album was wild,” she recalls. “We were doing something we loved in a city that felt exotic.” While recording Beauty and the Beat in NYC, Belinda was “listening to a lot of Patsy Cline and Dinah Washington.” Although the Go-Go’s sound might not align in obvious ways with country and blues influences, there’s a clear lineage of powerful women vocalists making waves and changing the music scene. 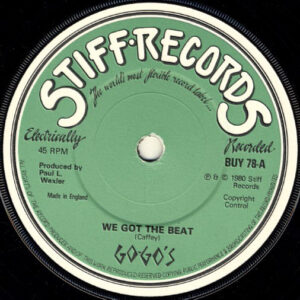 The album’s singles, Our Lips Are Sealed and We Got the Beat, are notably ubiquitous these days, from sound to cinema. We Got the Beat was initially released as a single by Stiff Records in the UK in 1980, which was Miles Copeland’s introduction to the band. A Boston Globe writer framed the single as “a song [Charlotte] Caffey wrote in five minutes while watching ‘The Twilight Zone’ and listening to Smokey Robinson on the radio.” In the early 1980s, it caught the ear of filmmaker Amy Heckerling. The track opens Heckerling’s directorial debut and cinematic cult classic Fast Times at Ridgemont High. Without the Go-Go’s, that film just isn’t the same. We Got the Beat makes the opening montage and cements the movie in cinematic history. I asked Belinda about the single’s inclusion in Fast Times. “I think the story goes like this: the producer of the film did not want We Got the Beat as the opening song. Amy Heckerling—this is what I heard—really fought to get our song as the opening track because she thought it was perfect for the film, and she got it. We Got the Beat perfectly sums up that time, that age, and that moment in Southern California. It’s a perfect fit—I don’t think any other song would have worked.”

Like women film directors such as Heckerling, the Go-Go’s, with their debut album and the records that followed, stand as a righteous middle finger to the labels who turned down the band before I.R.S. and to all the sexist naysayers who insisted on applying gendered labels, stereotypes, and tropes to the music. A review of the Beauty and the Beat in Sounds described the songs as “sweet and amusing for about five minutes,” while NME described the record as a “bubbling celebration by five cute girls, with no thought inside their darling little heads save for tonight’s beach party.” That patronising, infantilising language continued across various reviews of the record. A Newsday review reported how “almost everything about the Go-Go’s . . . is cute. The name is cute, the back-cover photos of the five female members of the band taking bubble baths are adorable.” A syndicated piece in the US noted that the “five-piece, all-girl band . . . plays a fresh, very ‘cute’ sort of music.” One American newspaper entitled its review of the album “5 Girls, No Men,” and suggested that the album had the potential to succeed only because the Go-Go’s were “not radical feminists.” Quite clearly, none of these writers took the time to learn about the emergence of the Go-Go’s from the Los Angeles punk scene or to properly consider the band members for the badasses they were (and are).

Even commentary and marketing with ameliorative aims ultimately highlighted the sexist inculcation of so many people behind the scenes. A Los Angeles Times writer praised Beauty and the Beat but described the songs as “the most invigorating collection of spunky, teen-and-female accented rock since Blondie’s debut LP in 1977.” And when famed photographer Annie Leibovitz shot the band for Rolling Stone, she suggested the women appear only in their underwear. An image from that shoot appeared on the cover of the magazine with the hyper-sexual and objectifying text: “Go-Go’s Put Out.” There are more examples, but you get the idea. Fuck’em! The Go-Go’s persisted and succeeded despite the misogynistic lens through which they were consistently framed.

The Go-Go’s established a new model for pop music, beginning with their debut record. Yet it’s not just that the songs on Beauty and the Beat are appealing for singing or dancing along (although they are). The lyrics reveal the band’s feminist power, acknowledging the sociocultural sonic lens through which women musicians are often heard while reclaiming a sense of agency. Belinda emphasises the seeming contradiction between the pop sounds of the songs and the narratives that emerge. “If you really pay attention to the lyrics, there’s a real intelligence and darkness behind them, setting up a dichotomy between the lyrics and the melody.” Our Lips Are Sealed perhaps explains this interrelation best:

Belinda’s favorite song on the album, This Town, further underscores the juxtapositions in the band’s music. “It really sums up the energy of LA when we were first beginning,” she says, “a kind of energy you could feel in the air.”

For four decades, the Go-Go’s have inspired artists to make melodic music that matters and have proven that women can and do sell records—millions of records. They’ll be inducted into the Rock & Roll Hall of Fame on October 30, 2021. Until then, play your copy of Beauty and the Beat loud and celebrate one of the most successful debut records of all time.

Words by Audrey J. Golden. You can follow Audrey on Twitter and Instagram, and you can check out her personal website to learn more about her writing and her archive of books, records, and ephemera.

Mentors for aspiring racialized politicians are in short supply

Wildfires scorch Spain and cause ‘disaster without precedence’ in Sardinia

U.S. to speed up asylum processing at border while fast-tracking deportations By Reuters

Zoë Kravitz Calls Out Publications For Objectifying Her