The hat and the pencil: who is Peru’s president in waiting?


With his huge straw hat and giant yellow pencil, Pedro Castillo has emerged from nowhere to become one of the most recognisable figures in Latin American politics in recent weeks, and appears poised to become Peru’s next president.

But beyond the eye-catching photographs of him ploughing fields in the Andes with oxen, stoking the wood fire in his modest mountain dwelling and riding to his local polling station on horseback, Castillo remains a largely unknown quantity.

He gives few interviews, and has declined to speak to the Financial Times. He has never worked in government and until now was best known for leading a teachers’ strike in 2017.

And yet, results from this month’s presidential election suggest he has secured an epic victory. With just a handful of disputed votes left to count, he leads his rival Keiko Fujimori by 50,000 votes — 50.1 per cent to 49.9. If her claims of electoral fraud are dismissed and the result is confirmed, he will be sworn in on July 28 as one of the most unlikely leaders in Peru’s rich history.

Much of the confusion surrounding Castillo stems from his flip-flopping on policy during the campaign. One minute he was a radical tub-thumper, determined to nationalise companies and rip up Peru’s 1993 constitution; the next he was trying to assuage the country’s terrified elite they had nothing to fear from him. No one knows what to expect.

On the stump, he knows how to fire up a crowd. His simple message — “no more poor people in a rich country” — resonated with millions of downtrodden voters in impoverished villages in the Andes and Amazon basin.

“He’s one of us,” said Edith Vega as she shopped for food in the town of Chota, close to where Castillo was born. “He knows what our problems are, and they’re not only the problems of Chota — they’re the problems that most Peruvians face.”

In the presidential debates, Castillo was calm and polite but offered little in the way of policy. In his few local media interviews he was sometimes hopelessly out of his depth, particularly when discussing the economy.

“Pedro Castillo is a disaster when he has to explain his ideas but he’s sensational when he reduces his message to a single phrase: rich against poor, the wealth of those on the coast versus the poverty of those in the Andes, the dispossessed against those who have everything,” said Rodolfo Rojas, a political analyst at Sequoia, a consultancy in Lima.

“He’s a teacher who had a poor education himself and it shows. To give one example, he’s had problems explaining the difference between the national budget and gross domestic product.”

Castillo was born in 1969 in the tiny hamlet of Puña in the northern Andean region of Cajamarca, by some measures the poorest in the country.

“I’m from a neighbouring area and I know something of the hardships there,” said Modesto Montoya, a Peruvian scientist and part of Castillo’s team of advisers. “In my town I knew children like Pedro who walked for hours to get to school. When they came into contact with the cities it made them aware of the injustices and inequality of opportunities that still exist in Peru. That’s what led Pedro to want to change the country.”

The third of nine children, Castillo went to a local school, helped his parents tend their crops, trained as a teacher and married his childhood sweetheart, with whom he has two children. He taught in a rural primary school.

He became a rondero — the peasant nightwatchmen who, in the absence of the state during the dark days of the 1970s and 1980s, formed their own communal protection groups, patrolling the Andes and meting out sometimes brutal justice to those they deemed criminals, including leftist guerrillas from the Maoist Shining Path organisation.

People who know him say that like many mountain villagers he is a social conservative. “It’s deeply ingrained in the Andean culture,” one said, adding that Castillo is unlikely to champion gay rights, women’s liberation or a relaxation of the abortion laws.

His first venture into politics came in 2002 when he stood unsuccessfully for a mayoral post with Perú Posible (Possible Peru), the party of then-president Alejandro Toledo.

Fifteen years later he reappeared, this time at the head of a striking teachers’ union. 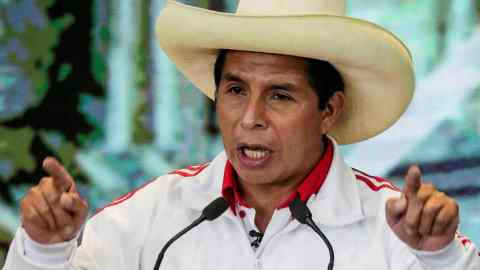 Castillo’s poor Andean roots have led some to compare him to Bolivia’s former president Evo Morales, but Montoya says the analogy is misguided. “I see him more as a Pepe Mujica,” he said, referring to Uruguay’s plain-speaking leftist president from a decade ago. “He’s a simple, honest man.”

The problem is knowing what this simple, honest man would do in government. Who would serve in his cabinet and who would advise him? While he flatly denies he is a communist, his party, Free Peru, is headed by a Cuban-trained Marxist ideologue, Vladimir Cerrón. It is unclear who would hold the reins of power.

In March, Castillo gave a local television interview in which he said he wanted “to revive the economy, renegotiate contracts, nationalise Camisea [a gas project], eliminate private pension funds and return money to Peruvian workers”.

He confirmed that as president he would sit down with foreign mining companies to squeeze more money from them, even to the point of driving them from the country.

“I imagine that at the end of the conversation multinationals are going to pack their bags and say ‘you know what? I’m out of here’ and the [Peruvian] people will say ‘that’s fine, you can go because we want companies that come and invest and negotiate with the state’,” Castillo said.

As US-based consultancy Teneo noted, Castillo would come to power “with a shaky mandate . . . a lack of experience and a tendency to improvise, an uncosted policy programme . . . a weak position in congress and a radical rival to his leadership within his party”.

Like Castillo’s own journey to the polling station in the first round of the election in April, when he paraded through the streets of Cajamarca on a skittish, bucking horse, it promises to be a rough ride.

No, the ‘real problem’ with the coronavirus surge is not the border

How to Exercise During Menstrual Cycle Phases

Here’s which states are eliminating pandemic unemployment benefits, and when.

Tilray Surges as Cannabis Poised to Benefit After Lockdown

These Were the Most Popular Fashion Items Last Month

Coronavirus: More than half of Canada’s population has received at least one dose of COVID-19 vaccine

Court fight over Liberal gun ban may be nearing its end

An epidemiologist has revealed the two factors which will keep Greater Sydney locked down well beyond...