VOIVOD Aim To Enter The Studio This Fall


During a recent appearance on The Metal Voice, which can be seen below, Voivod guitarist Daniel “Chewy” Mongrain provided an update on Voivod’s as yet untitled fifteenth studio album, saying:

“We’re still in the writing process… we’re still sharing files. We hope to go into the studio and start recording this fall, but it’s hard to tell. I think the situation will get better and we’ll have the chance to meet more often and jam together; that’s where the magic happens usually. But we’ve learned to work in this context as well. And that’s cool because I received a bunch of tracks from Away, who is programming drums with his computer, and it sounded exactly like Away’s playing. I was super impressed because sometimes you use a computer, it sounds kind of square. But everything was perfect! So it’s really fun to do, it’s a different way. It’s going to bring different ideas, if we welcome it in a creative way.”

“It’s still early in the process, but it’s going. I feel the need personally, and I’m not talking on behalf of the band, I feel a little bit more thrashy, some dirtiness so to speak, in the sound. Complexity has always been part of my influence in songwriting, so I’m not worrying about that side. But maybe a bit less polished and more rock ‘n roll I guess.”

Voivod’s “Hypercube Sessions” began last August with a blazing live set from RadicArt studios, the studio where Voivod recorded their Juno award winning album The Wake, and continues with Voïvod’s “Hypercube Session 2”, where the band will be performing Nothingface for the first time ever on May 30. The date also coincides with Michel “Away” Langevin’s birthday!

“Hypercube Session 3” will feature the classic Dimension Hatröss album and will stream on June 27.

Both shows will be available for 48 hours after the initial broadcast. Don’t miss these unique performances by one of metal’s most acclaimed and innovative bands! The exclusive event will include an afterparty live chat with the band hosted by Vox and Hops. 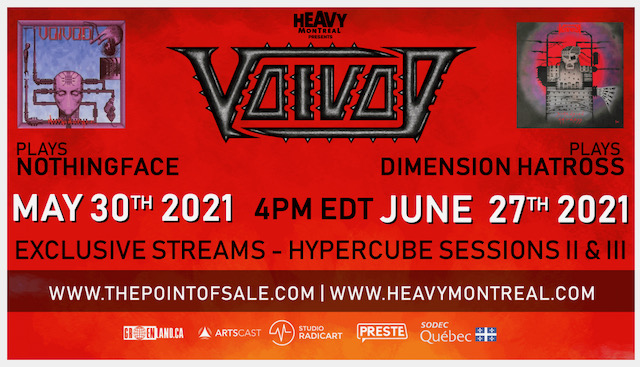 Ticket options for each session are available for purchase below:

How Jana Kramer Found Out Mike Caussin Was Cheating Before Split