Wings Over Scotland | The Taking Of Holyrood 129


So here’s your majority:

And we know because they told us.

It only took a matter of hours for two million votes for independence to be hijacked as endorsements for trans ideology. 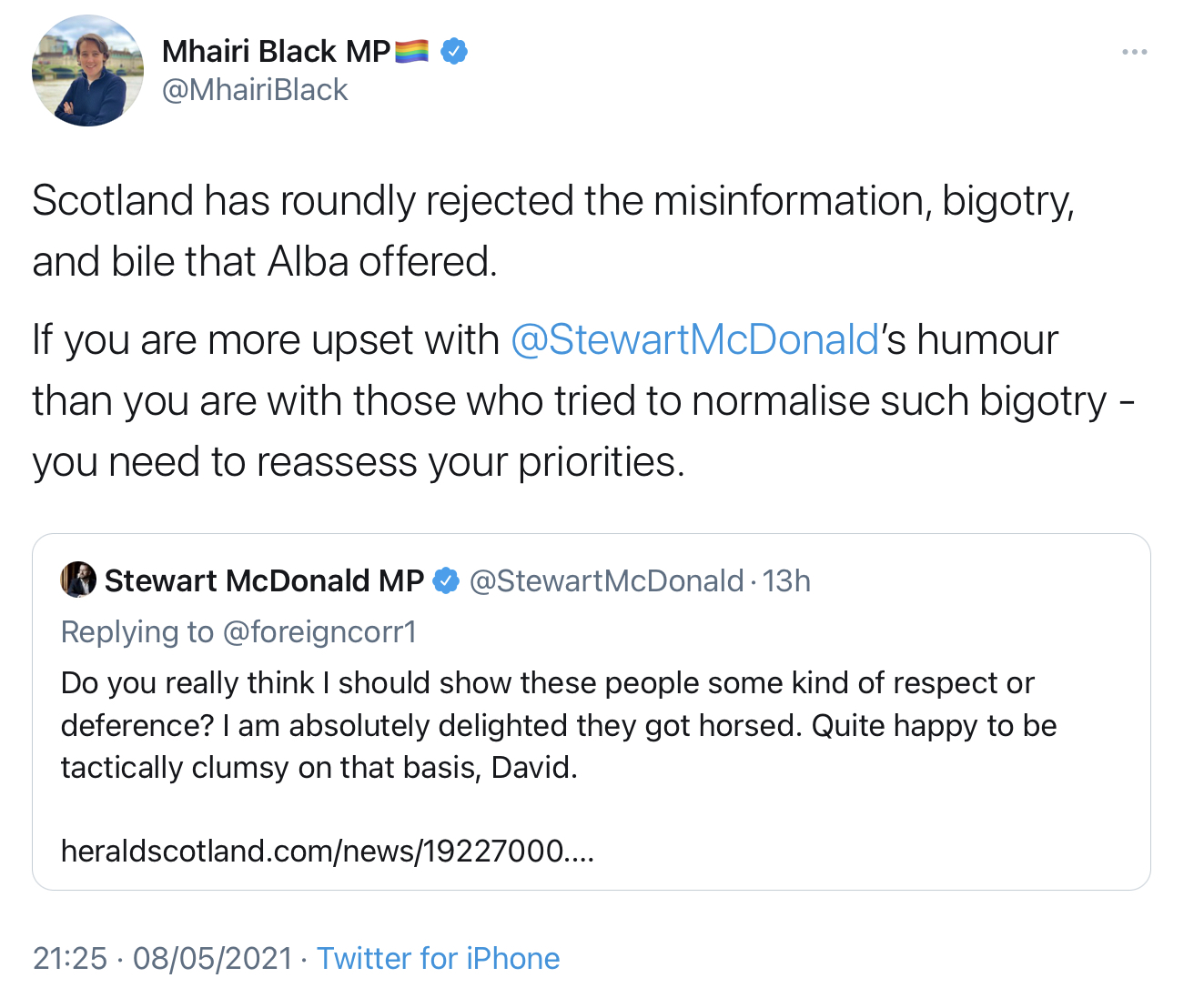 This piece of Wildean wit was Stewart McDonald’s “humour”, btw: 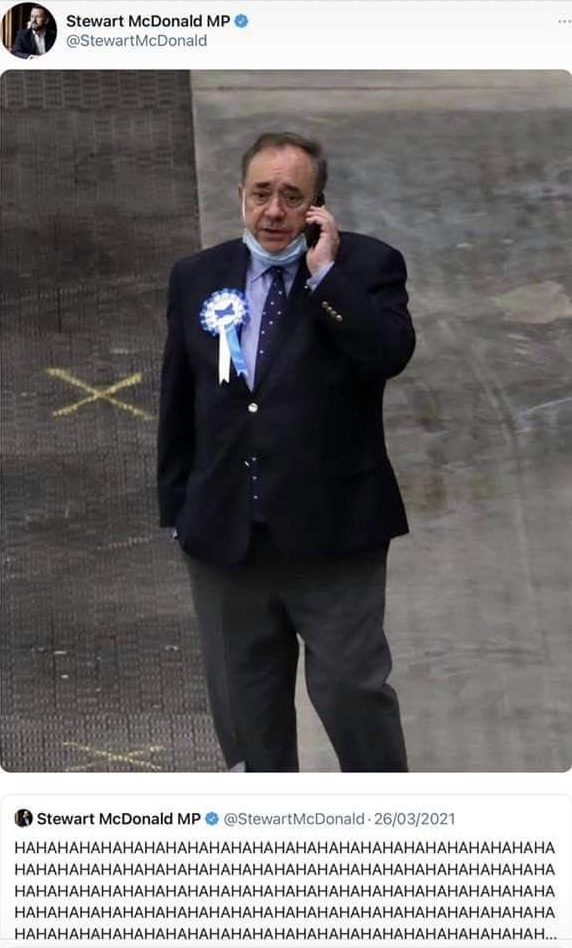 (He defended it indignantly and “unapologetically” for a few hours, then deleted it.) 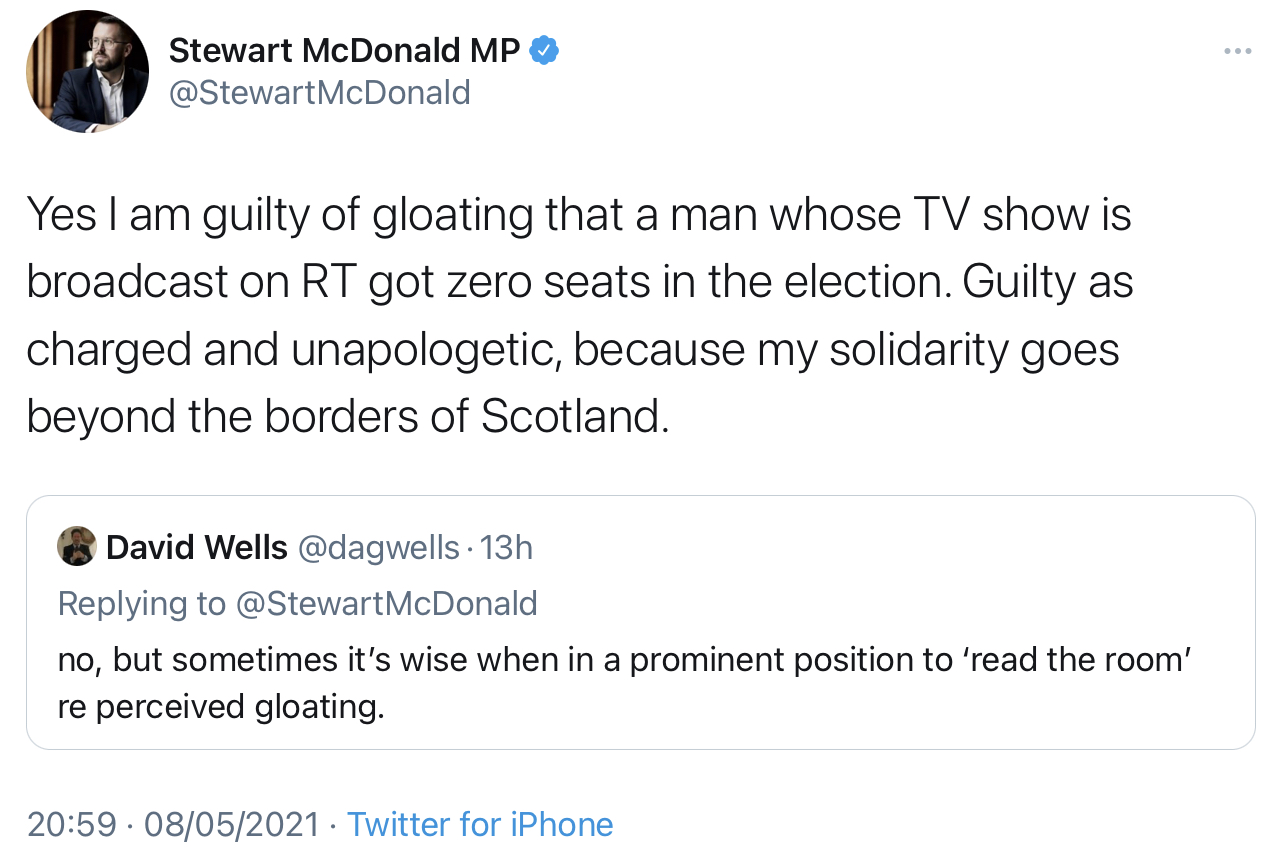 McDonald and Black, of course, owe their entire lucrative Westminster careers to Alex Salmond, but gratitude and decency are alien concepts to the modern SNP. 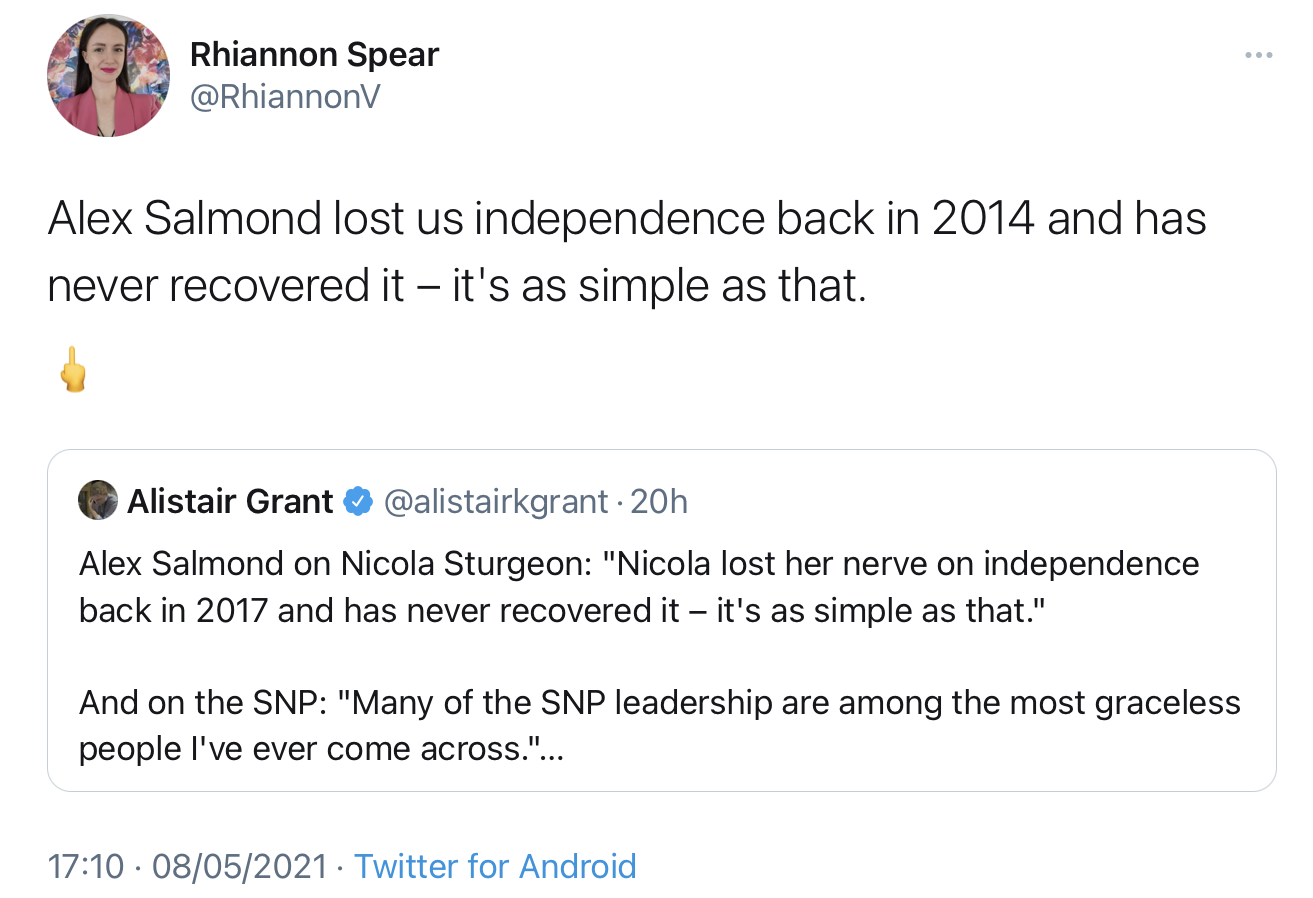 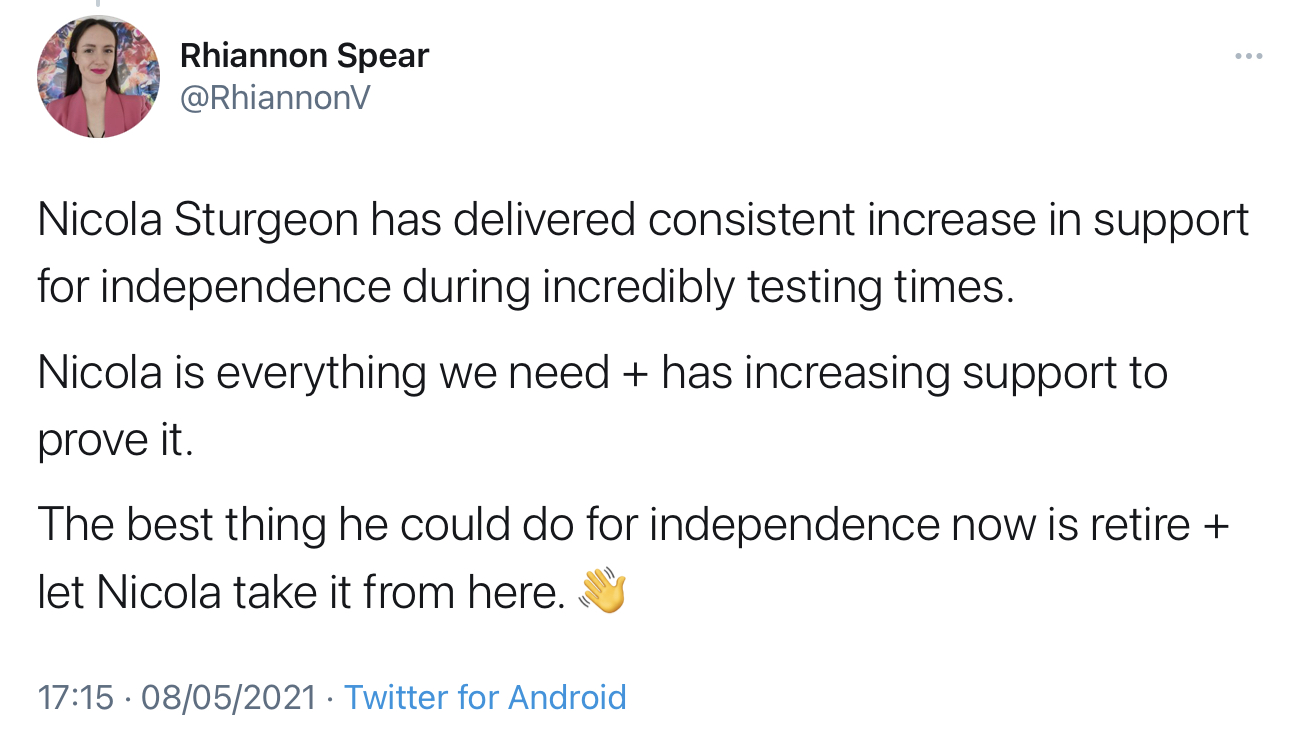 Spear doesn’t owe Salmond her political career, because she doesn’t have one. Every time she tries to get herself elected the SNP membership recoils in total horror. But we already know that her claim of Nicola Sturgeon delivering a “consistent increase in support for independence” is absolute hogwash. Support for independence is exactly where it was when Sturgeon came to power on the back of Alex Salmond’s leadership and mentoring six and a half years ago, despite the sort of favourable political circumstances Salmond could only have dreamed of being handed.

Indeed, Sturgeon’s failure to win an absolute majority on Thursday was by any sort of detached and fair analysis a rotten performance. Up against two wet-behind-the-ears new branch office managers in Douglas Ross and Anas Sarwar, following on from two of the most ineffectual ones in Scottish history (Jackson Carlaw and Reinhard Leinster, if you’ve already forgotten their names), and contrasting herself with the most unpopular UK Tory leader in 40 years – a man mired in corruption and responsible for over 120,000 deaths from the coronavirus pandemic – Sturgeon needed a net gain of just TWO seats to win an absolute majority, and still couldn’t manage it.

She also failed to secure a majority of the popular vote for pro-indy parties. The total combined constituency and list votes came to around 49.5% for indy parties and 50.5% for Unionist ones. That’s a tiny but hugely significant margin, because it gifts Boris Johnson the moral high ground any time the SNP try to suggest that an indyref is “the will of the people”.

In any event, Sturgeon had already disavowed any notion of votes for the SNP at the election being votes for a second indyref, but just for her personally.

GLENN CAMPBELL: What are [voters] meant to do if they want you but don’t want independence?

NICOLA STURGEON: They should vote for me.

But none of that matters, because Sturgeon never needed or really wanted a majority of either seats or votes. Between them the SNP and Greens can comfortably achieve everything that they actually intend to achieve, which is the furtherance of a social-engineering agenda based around Queer Theory and enforced by “hate crime” law.

She’s already signalled that there won’t even be any kind of token attempt to pursue independence until 2023, and if and when that happens it’ll be swallowed up in legal conflict until the next UK election in 2024, at which point the SNP will of course plead for one more mandate. In the meantime the legal concept of a woman will have been abolished and dissenters will be intimidated into silence by the law.

The tweets above couldn’t make that analysis any more obvious. Now that they’ve got your votes and secured their seats and their real agenda for a few more years, the SNP are barely even bothering to pretend.

Spanish Grand Prix live stream: How to watch the race online and on TV today

Wendy's to take on McDonald's and Burger King in Britain

The 10 Best (and Worst) Fabrics to Wear During Summer

A bronze sculpture of a tin miner overlooks a short strip of budget food and clothing...