Mumford and Sons banjo player Winston Marshall has quit the folk rock band after he was pilloried in public for making an ‘innocuous’ post on Twitter supporting a controversial journalist.

In a 1,263-word essay on Medium, the son of Brexit-supporting millionaire Sir Paul Marshall revealed that he feared his political opinions would ‘inevitably’ bring his bandmates ‘more trouble’.

He said that he ‘failed to foresee’ that his praise of Right-wing journalist Andy Ngo’s book on the far-Left extremist group Antifa ‘could be interpreted as approval of the equally abhorrent Far-Right’.

Mr Marshall, a founding member of the band from Wandsworth, London, said that he could have stayed with the group and ‘continued to self-censor’, but believed it would ‘erode my sense of integrity’.

The folk rock musician was attacked on social media earlier this year after endorsing Mr Ngo’s ‘important’ book Unmasked: Inside Antifa’s Radical Plan To Destroy Democracy. He also called the US reporter, who has been attacked by Left-wing thugs while covering street clashes, a ‘brave man’.

Following allegations he was ‘endorsing Fascism’, the band held crisis talks – after which Marcus Mumford, Ben Lovett and Ted Dwane, along with their management, reportedly asked him to leave the group.

In March the banjo player said he was stepping back from the group,  leading one critic of cancel culture to write: ‘Never appease the hate mob, you should have stood by your words’.

Writing on Medium, Mr Marshall described how his offending tweet triggered ‘tens of thousands of angry retweets and comments’. He called allegations that he was a Fascist ‘ludicrous’, revealing that 13 members of his family were murdered in Nazi death camps during the Holocaust. 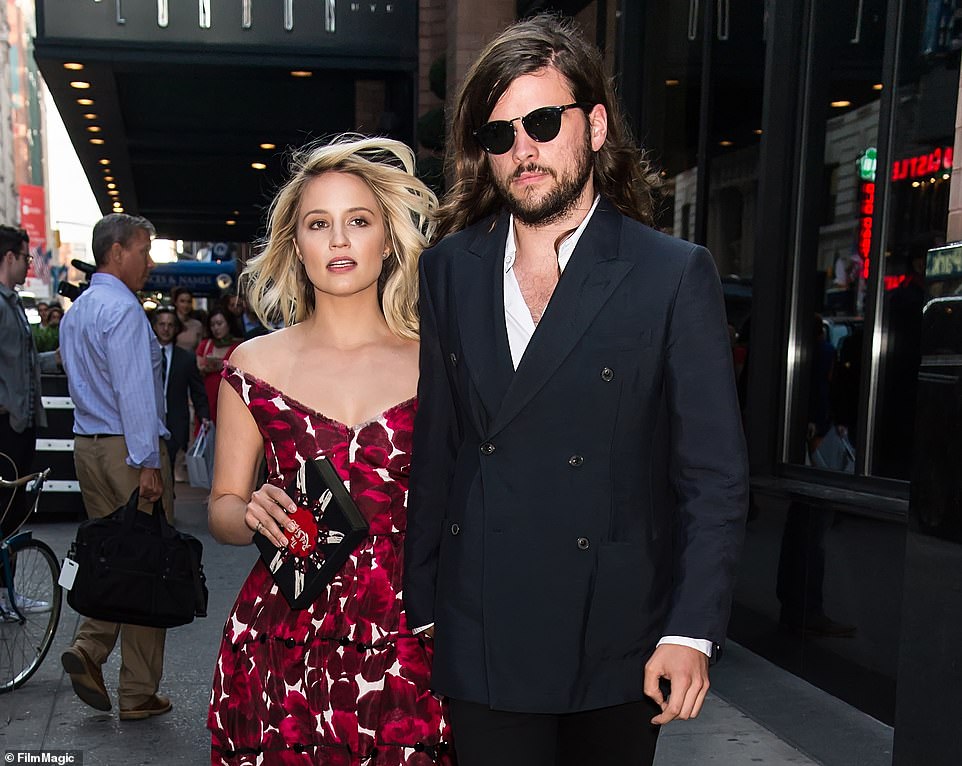 Winston Marshall was attacked on social media after tweeting support for US journalist Andy Ngo. In 2015, Marshall married Glee star Dianna Agron, before the couple divorced in August 2020. They are seen together in New York in 2015 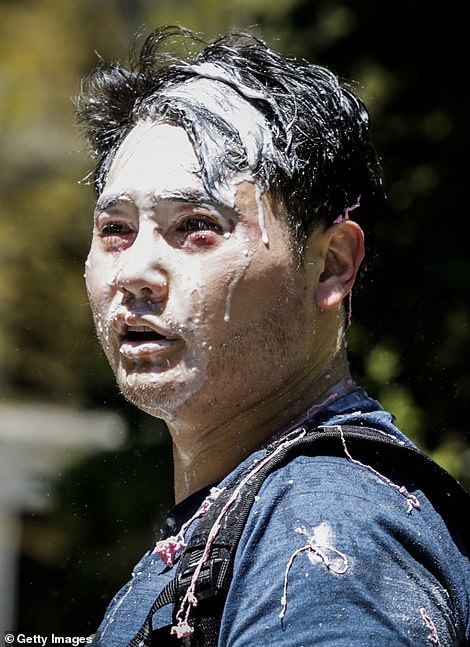 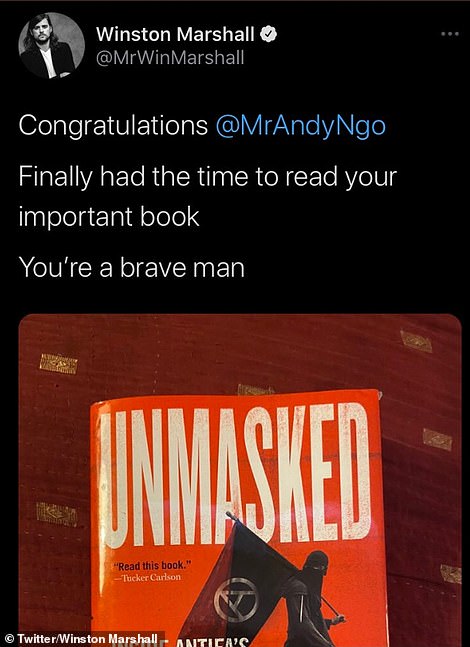 Ngo’s (left) book Unmasked claims to expose Antifa – the name for protesters in the US who arrive at far-right marches to oppose them – as a ‘violent extremist movement’. Pictured right: Marshall’s tweet 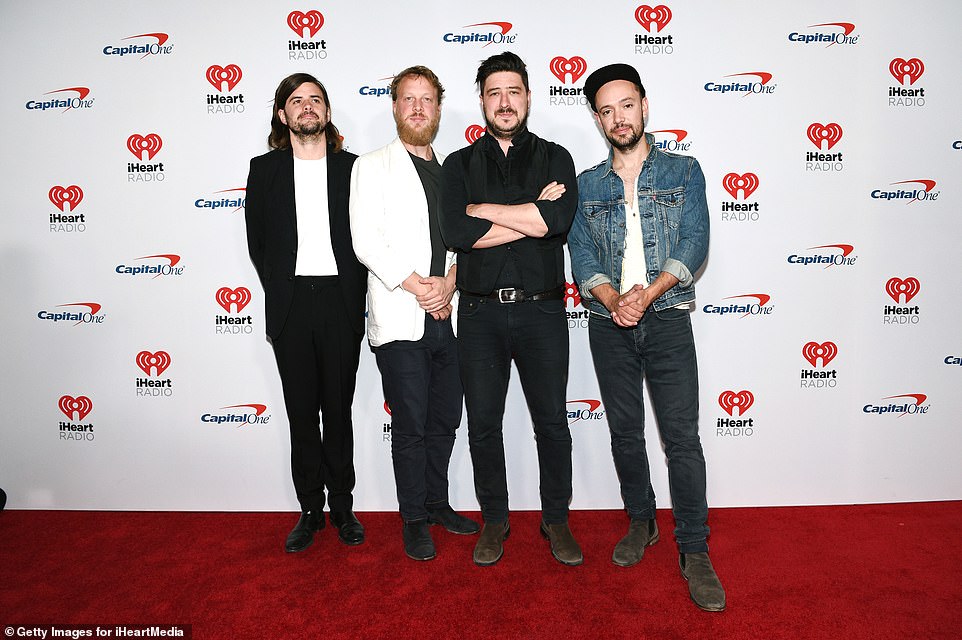 Andy Ngo, 35, is a conservative American journalist from Portland, Oregon, who has sparked controversy for his reporting on street clashes between left and right-wing protesters in the US.

Ngo is editor-at-large of news site The Post Millennial and regularly appears on Fox News. He has also written columns for several publications including The Spectator and the Wall Street Journal.

Ngo came to national attention in 2019, when he was attacked by far-left antifa protesters at a march by the right-wing extremist group the Proud Boys in Portland, Oregon.

His book, Unmasked: Inside Antifa’s radical plan to destroy democracy, claims to expose Antifa – the name for protesters in the US who arrive at far-right marches to oppose them – as a ‘violent extremist movement’.

It claimed his attack was just one example of ‘a long list of crimes perpetrated by antifa’ and ‘tells the story of this violent extremist movement from the very beginning’.

He includes interviews with former Antifa members and people who have been attacked by the group to suggest it wants to ‘destroy the nation-state, America in particular’.

Ngo calls the book ‘a letter of gratitude to the nation that welcomed’ his parents when they emigrated from war-torn Vietnam, and claims Antifa consists of ‘violent leftists’ who want to undermine American democracy.

One of the ways it does this – Ngo – claims, is to attack ‘responsible’ journalists like him who are reporting on them activities in an attempt to scare them into submission.

The book has been criticised by some media outlets as inaccurate.

In the same year it was published, a video surfaced online of Ngo laughing and smiling alongside members of Patriot Prayer, another far-right group, who later attacked antifa members gathered at a nearby bar.

At the time, Portland Mercury journalist Alex Zielinski reported that ‘there’s no way [Ngo] couldn’t know the group was planning on instigating violence’ – but Ngo denied this claim.

Ngo is well known for videoing clashes between left and right wing protesters and posting them online – often with a lively commentary that has attracted criticism in some quarters.

He wrote: ‘I’ve had plenty of abuse over the years. I’m a banjo player after all. But this was another level. And, owing to our association, my friends, my bandmates, were getting it too. It took me more than a moment to understand how distressing this was for them.

‘Despite being four individuals we were, in the eyes of the public, a unity. Furthermore it’s our singer’s name on the tin. That name was being dragged through some pretty ugly accusations, as a result of my tweet.

‘The distress brought to them and their families that weekend I regret very much. I remain sincerely sorry for that. Unintentionally, I had pulled them into a divisive and totemic issue.

‘Emotions were high. Despite pressure to nix me they invited me to continue with the band. That took courage, particularly in the age of so called ‘cancel culture’. I made an apology and agreed to take a temporary step back.

‘Rather predictably another viral mob came after me, this time for the sin of apologising. Then followed libellous articles calling me ‘right-wing’ and such. Though there’s nothing wrong with being conservative, when forced to politically label myself I flutter between ‘centrist’, ‘liberal’ or the more honest ‘bit this, bit that’.

‘Being labeled erroneously just goes to show how binary political discourse has become. I had criticised the ‘Left’, so I must be the ‘Right’, or so their logic goes.’

He went on: ‘I have spent much time reflecting, reading and listening. The truth is that my commenting on a book that documents the extreme Far-Left and their activities is in no way an endorsement of the equally repugnant Far-Right.

‘The truth is that reporting on extremism at the great risk of endangering oneself is unquestionably brave. I also feel that my previous apology in a small way participates in the lie that such extremism does not exist, or worse, is a force for good.

‘For me to speak about what I’ve learnt to be such a controversial issue will inevitably bring my bandmates more trouble. My love, loyalty and accountability to them cannot permit that. I could remain and continue to self-censor but it will erode my sense of integrity.

‘Gnaw my conscience. I’ve already felt that beginning. The only way forward for me is to leave the band.

‘I hope in distancing myself from them I am able to speak my mind without them suffering the consequences. I leave with love in my heart and I wish those three boys nothing but the best. I have no doubt that their stars will shine long into the future.’

Mr Ngo’s book Unmasked claims to expose Antifa – the name for protesters in the US who arrive at far-Right marches to oppose them – as a ‘violent extremist movement’.

Critics say it inflates the size and threat of the Left-wing Antifa movement, which was a frequent target of President Donald Trump. It was even described by the Los Angeles Times as ‘supremely dishonest’.

In his offending tweet, Mr Marshall wrote to Mr Ngo: ‘Finally had the time to read your important book. You’re a brave man’.

The book recounts how Mr Ngo was attacked and ‘milkshaked’ by militant anti-Fascist protesters in 2019 – along with the history and tactics of the Antifa movement.

Footage at the time showed Mr Ngo being punched, kicked and covered in milkshake. The writer tweeted afterwards that he was bleeding and had been robbed of his camera equipment and was heading to the hospital for treatment. At least three demonstrators from Antifa were arrested.

He said: ‘Attacked by antifa. Bleeding. They stole my camera equipment. No police until after. waiting for ambulance . If you have evidence of attack please help.’

Adding: ‘On way to hospital. Was beat on face and head multiple times in downtown in middle of street with fists and weapons. Suspects at large.’

Mr Ngo has in the past associated himself with US group Proud Boys, who are self-described ‘western chauvinists’ and identified as a ‘hate group’ by anti-extremist organisation the Southern Poverty Law Centre. 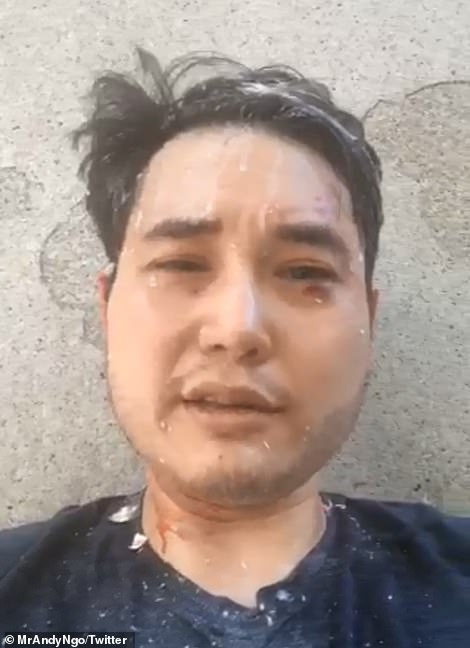 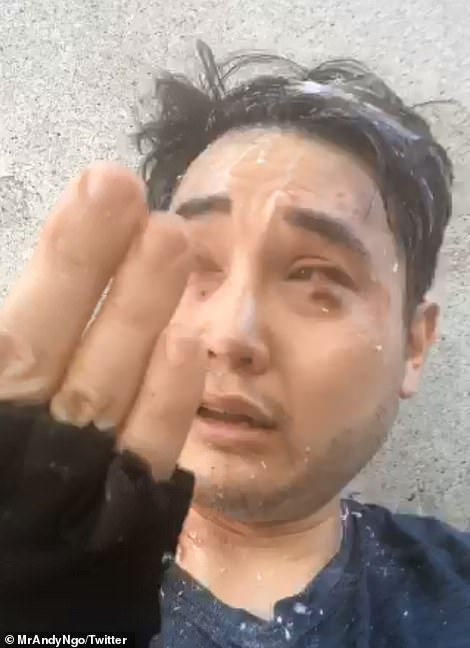 Ngo, who describes himself in his Twitter bio as ‘hated by Antifa’, is seen attempting to get away from the crowd 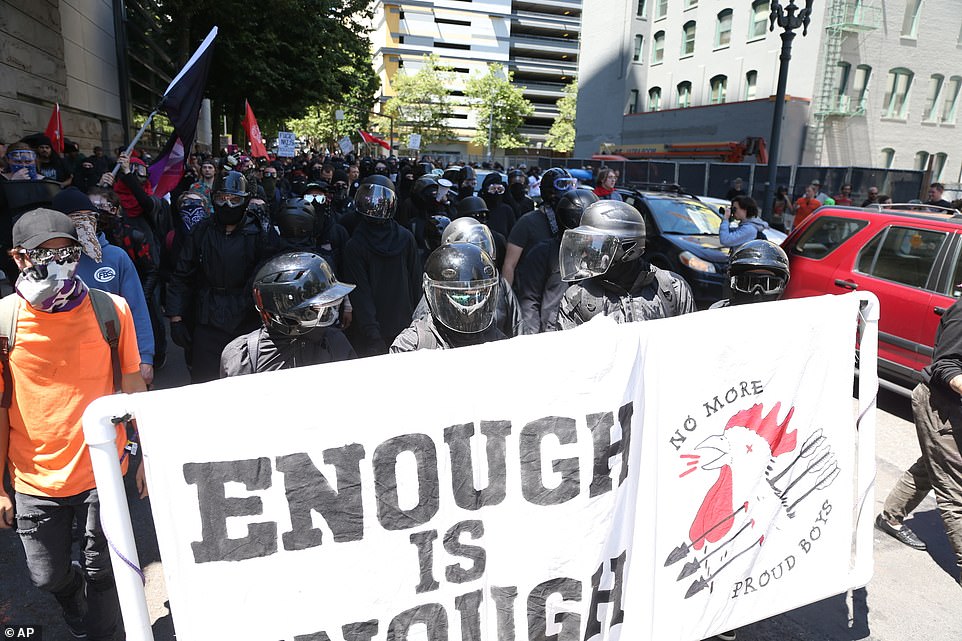 The march in Oregon where Ngo was attacked. He was covering protesters from the far-right Proud Boys group 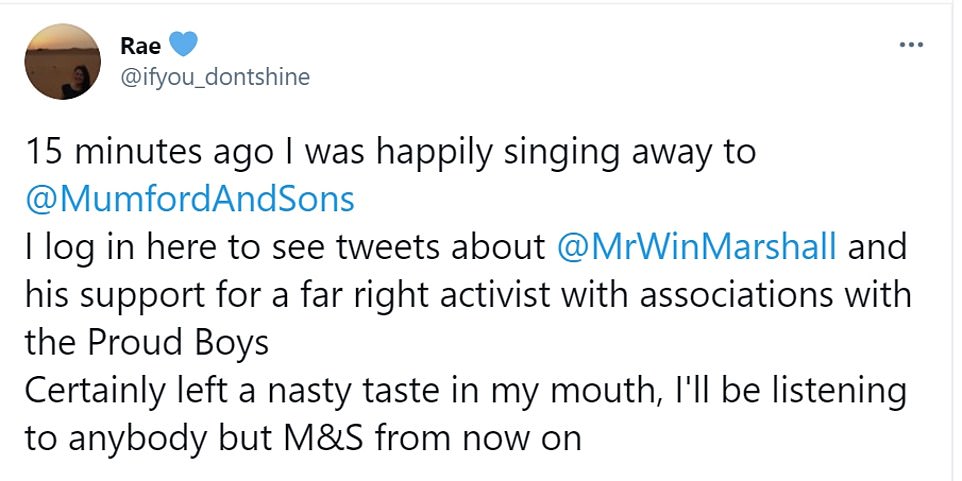 But there was also anger at Marshall leaving the ban, with one commentator saying, ‘Never try to appease the hate mob’

Mumford fans quickly criticised Mr Marshall for his tweet – with one writing: ‘Certainly left a nasty taste in my mouth. I’ll be listening to anybody but M&S from now on.

But another wrote: ‘This is so damn disappointing and really reinforces all the bad stereotypes about what it means when you hear ‘the sound of banjos.’ Supporting fascism ain’t a good look.’

In 2015, he married Glee star Dianna Agron, before the couple divorced in August 2020.  The notoriously private couple tied the knot at the Beldi Country Club in Morocco in 2016, following a whirlwind romance and lived in New York.

The couple were first rumoured to be dating back in 2015 when Miss Agron was pictured holding hands with Marshall when she joined his band on tour in Paris.

Mr Marshall is rumoured to have dated Katy Perry just before she got together with Orlando Bloom.

Cruella Sequel In The Works Even Though 101 Dalmatians Already Exists

Biden is forced to denounce communism